What About "Big Oil" Now?

I like watching the normies and leftists react to the oil industry because it not only shows how completely clueless and deluded they are about the oil industry, but it belies just how fantastically stupid they are.  Usually, once every 5 years or so, some journalist will crack open Exxon's annual report and decry that it made "$40 billion" in EEEEVIL profits while kids in Durkadurkastan live off of a nickle every five years and eat flies for nourishment.  Naturally the leftists and normies are incensed, and demand something be done about it.  But if we're really lucky, once every 10 years they'll parade their stupidity for all to see and float around that deader-than-a-door-nail idea to "boybott big oil" on "one" day.

However, that's usually when oil prices are high and thus, naturally, when profits are also at all time highs.  But what about when oil goes to all time lows?  Does the left report on the losses or drops in revenue of "Big Oil?"

No, of course not, because that doesn't fit the narrative.  And so to keep the sheeple in line, the media will never report how "Big Oil" is doing today, now that oil is about a 1/3rd of what it used to be.  But I will.

In short it doesn't look good.

Exxon came out "the best" out of the Big Oil companies I looked at.  Their revenues are down about 40% from last year and their profit has been cut in half since 2014. 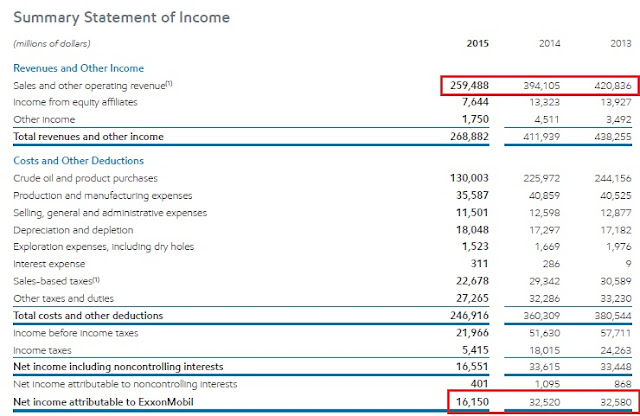 British Petroleum experienced a similar drop in revenue, but actually posted a loss of $6 billion.

And "hated Halliburton" (which recognized your hate and has since moved their HQ to Dubai, don't worry, you won't be able to tax them soon) also experienced a loss: 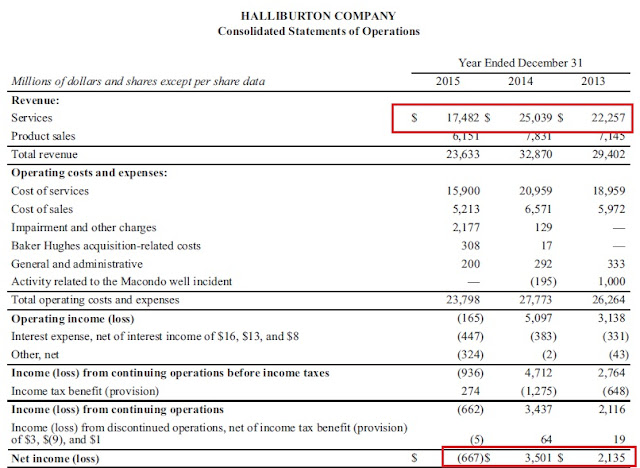 Even Baker Hughes (the fracking half brother of "Big Oil") posted a loss for 2015.

I could go on about how this is another example of leftist bias in the media and how Americans are idiotic lemmings sopping up whatever propaganda is put in front of them, but we all know that is pointless.  I merely want you to book mark this post, or perhaps share it with people on the facebook or teh interwebz so the next time oil prices go sky high and "Big Oil" has those hated at vilified "record profits" you can pull up this ole post, shove it in the sheeple's faces and tell them to have a cup of STFU.
Posted by Captain Capitalism at 7:21 AM

Nah.... This article makes too much sense. They're not interested in the data, even though the masses will pull out random stats themselves if it fits their narrative. They'd rather discuss the latest Spiderman vs Curdman flix, or whatever the latest iteration of movie there is....

Cappy it does not work because Leftists were promised 'no math' when they signed up. Emotions only please....

Another great Captain Capitalism post. I once had an argument with a co-worker when I told him sometimes corporations, and oil corporations too, sometimes LOSE MONEY. I think I convinced him when I was pulling up corporate reports on line to show him, but he was truly surprised that this was even possible.

So many people have been totally brain washed by the left.

Keep up the great work Cappy.

It would be interesting to know your opinion on negative interest rates and how this will affect Bitcoin and Silver.

Saudi Arabia is borrowing money to fund it's government spending. It's negative interest printing press is it's oil.

The time is serious, you need to make a Clarey Original and long written article on systemic fiat currency risks, the threat of negative interest rates spreading world wide and how to preserve capital in a world run by starving regimes bent on confiscating and destroying wealth.

Bitcoin has doubled since January on currency wars and negative interest rates.

I know you love Silver and the current conjecture points towards a world currency crisis.

It's time to talk money with your audience and forget about democrats for a while.

lol normies. they are politically correct brainwashed people who are incapable of critical thinking or original ideas

I think the narrative will now shift to Exxon and Haliburton didn't pay any income tax.

Of course, no one was complaining when Exxon paid 24 BILLION dollars in income taxes in 2014.