What the Railroad Tells Us About the Economy

The economy ever since 2006 has been "Meh."
When historians and academics look back at Obama's economic performance, they'll say "meh."
We never left the recession as far as I'm concerned and with economic growth BARELY outpacing population growth our increases in standards of living has been "meh."

And since "meh" isn't exciting, I moved onto other things.

But then I hear whispers and rumors, sayings and speakings, and an increasing amount of them are about the economy.  And the economy is no longer "meh" like it has been since 2008, but things are not looking too good.  Oil prices are down (not just on supply concerns, but demand concerns).  The Baltic index is down, showing a global slow down.  And then a little birdy in the railroad biz I know said to look at rail car traffic.  And 2016 it is very much down. 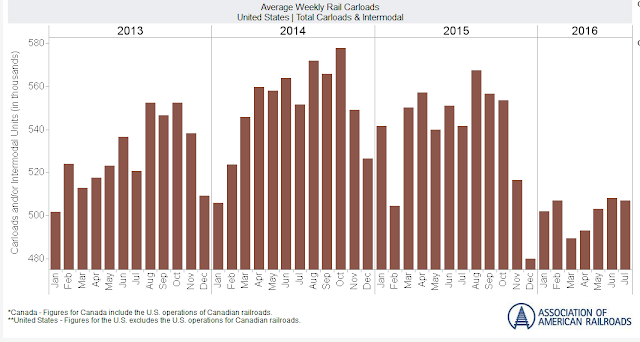 Now like I said before, I really don't care much about economics anymore.  In part because there's nothing new.  In part because it's quite a simple social study and not the complex science it's self-promoting whores make it out to be.  And in part because the majority of people prefer their parasitic consumption of free stuff over the long term viability of the economy (and their childrens' futures).  And so instead of banging my head against the wall, I just go pour another drink, hike another mountain, and buy some more ammo.

But this chart is interesting because (as Alan Greenspan was famous for measuring) rail road car traffic is a statistical measure than can't be fabricated or manipulated by BEA economists.  It's a concrete measure that (like the railroad tie replacement Alan greenspan would measure) can be used to measure true economic production and growth in an economy no matter how violently Washington DC economists rape GDP figures.

I still don't think there's going to be a great economic collapse like 2006-2007.  The world needs us too much and our reserve currency will protect us from most of the shocks.  But don't be surprised if we have a little slow down like we did during Bush's final years in office....just expect the media to claim it's a "minor economic slow down" and not "the worst economy in 50 years" because Obama is in office.
Posted by Captain Capitalism at 2:01 AM

Are you forgetting the new currency China is rolling out that lots of countries and banks are signing up to?
With the US fining banks billions, it was only a matter of time.

Well the government works hard with more regulations to make sure we all stay unemployed.

I don't vape, but you cant' help to wonder if anyone thought this one through.

I dont always like CAPITALISM,
BUT when I do, WOMEN HAVE TO PAY ME FOR EVERY SINGLE THING I DO.

Baltic Dry is currently taking a significant hit due to the utter poor planning on the part of the shipping lines in their insane expansion after the 2008-2009. Those super containers are hitting the market now. With or without the cargo, the mortgage need to be paid. Hanjin shipping of South Korea almost went bankrupt and was saved by the government because the company is simply too big to fail to South Korea.

I don't see how Baltic Dry can recover anytime soon.

I'm pretty sure much of the economy has transitioned from physical assets into non-physical assets (Like digital software) and services. So it doesn't necessarily mean the economy sucks just because there's less railroad traffic.

Hmm... and when exactly in the last two years did it magically do that? (Never mind tech IPO's are drastically down in the past year or two.)

The most recent Tech Stars "class" (a popular tech incubator program in Seattle) failed to fill all the slots. It's free money and there weren't enough serious entrepreneurs to hand it out to.

Obamacare. When you make it expensive or illegal to hire employees, companies stop hiring them. Fewer employees means less production. On the plus side it probably helped bolster (comparatively) free economies like China.

So a full service economy is good
When there is no more manufacturing or farming or mining etc, we can all live off of the digital world

If you want to see what a service economy looks like drive through southern WV. With the war on coal most of the mines are closed. So all those miners can go work at McDonalds and Walmart right? With the miners out of work the truckers are also out of work. The trains aren't running so railroad workers are laid off. With no mines operating the mechanics and repairmen are out of work. The parts and equipment suppliers are out of work. The accountants and office workers are out of work. Without all of those jobs all of the local businesses are closed and boarded up. The schools and day cares are closed. The local health care and doctors offices are closed. Entire towns are abandoned. The only Walmart for 50 miles is closed. Everyone who can move away has done so. Only the poorest of the poor remain. In most towns all you will find open is a gas station, a dollar store, and maybe a McDonalds. You can't have an economy without making things. All of that service economy money has to come from somewhere. It doesn't just magically appear.