The Big 3 Bailout Would Just Bailout the Unions 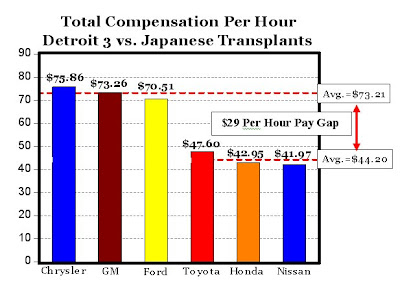 ht to Dr. Perry.
Posted by Captain Capitalism at 2:56 PM

What the pundits and politicians ignore is the real problem — sorry about this — but the UAW will never allow the industry to become competitive in the global economy. The solution is hard to swallow, but must occur for any of the big 3to survive without (repetitious) US bailout funds, get rid of the UAW and cut wage and benefits by 1/2 — at a minimum, plain and simple.

This is just the tip of the iceberg Cappie.

Workers Compensation premiums, unemployment insurance premiums, medicare and social security taxes are tied to payroll, so the net effect of the higher wages on the bottom line of the Big Three is much greater than the wage story alone.

Overtime pay is, of course, also tied to the base wage so labor costs increase by a multiple of the higher wages for every hour of overtime.

Furthermore, pensions are tied to the highest years of earnings, so higher wages mean more pension costs. There are twice as many retired auto workers receiving pensions than there are current workers.

UAW also has the most generous health insurance benefits in the country, with nearly 100% coverage for the rest of their lives.

These dummmies have merely bargained themselves out of a job, and now they want a government handout to make good on their hard-earned extortion money.

It's both inefficient and insulting for some high school dropouts to be making more than a guy with a PhD in Economics only because they band together to strong-arm their company.

My vote is to let them eat cat food and live in refrigerator boxes. Either that, or they can work in a sweat-shop making plastic dish racks for Wal-Mart.

Using an old term from Dungeons and Dragons, these player-characters have "No skills of measurable worth."

The unions moved past their true usefulness long ago. For decades now they've been nothing but bloodsuckers on the employers and cost the consumer countless wealth. Even in a capitalistic society it's damn hard to justify paying someone $76/hr to put lug nuts on an SUV.

It will not matter if the labor costs of Detroit are equal to the Japanese if Detroit continues to have a declining market share.

You can bet that Honda does not attribute its success to having lower labor costs.

Here is what Honda says:
http://www.theautochannel.com/news/2008/01/10/074777.html
"Production flexibility has been a key driver to the company's success -- enabling Honda to add production of new models and move production between plants to optimize capacity and meet the changing needs of its customers."
"The company has invested more than $9 billion to steadily expand its capabilities in the North America region to include 14 major manufacturing facilities employing more than 35,000 associates and producing more than 2 million products annually, including more than 1.4 million Honda and Acura automobiles as well as motorcycles, all-terrain vehicles, personal watercraft, lawn mowers, general-purpose engines and other power equipment products."
"Honda is also on track to produce its 15-millionth vehicle in the U.S. and 20-millionth vehicle in North America in 2008."
The problem with Detroit is not just labor costs. It's management.

I am certain that Honda pays the same taxes that Detroit pays. When all one looks at is costs, then all one will ever see is what is costing you more instead of what has value.
I am reminded of the time when Ford was closing a lot of plants across the US before Iacocca left them. The analysts would come in every month and tell the execs how much money Ford would save if they closed this plant or another plant. After several months of this one of the frustrated executives said, 'Let's close all the g*d d*mn plants then we will really be making money.' After that there was no more discussion about saving costs by closing plants.
My point is that the problem with Detroit is not just labor costs and it is disingenuous to say that it is. When you choose ONE thing and imply that IF ONLY they could fix this, they could be competitive. Well, hooey, just plain hooey.
And we have not talked about how much Detroit outsources its production to cheaper foreign countries (like Mexico and Canada) and it still can't compete.
If you want to know what happened in the recent union negotiations, please go here:
http://fskrealityguide.blogspot.com/2007/09/analysis-of-uaw-and-gm-contract.html
"Current GM employees negotiated a 0% raise over the life of the contract. They will receive a one-time bonus of $3000 upon ratification, and bonuses of 3%, 4%, and 3% each year after that. There is no increase in base salary. There just are these one-time bonuses. When you consider that inflation is 6%-15% per year (depending on how you measure inflation), that means that the UAW effectively negotiated a pay cut of 15%-30% over the life of the contract after inflation."
And the contract reduced the health benfits for retirees.

I am not an economist but I do know that labor costs today are not the problem with Detroit.

You do realize, kindlingman, that if Honda promoted their lower labor costs aggressively as the means to their success, the UAW would be in there in a heartbeat, right?

Sometimes smart businessmen don't publish every reason they're doing well for reasons that are obvious to other savvy businessmen, but not the general public.

I agree that labor isn't the ONLY problem, but it is a big one.

Over at The American Prospect, they contend the workers are not paid $70/hour.
http://www.prospect.org/csnc/blogs/beat_the_press_archive?month=11&year=2008&base_name=gm_auto_workers_are_not_paid_7

"How does the NYT get from $41 to $70? Well the trick is to add in GM's legacy costs, the pension and health care costs for retired workers. These legacy costs are a serious expense for GM, but this is not money being paid to current workers. The person on the line in 2008 is not benefiting from these legacy costs."

There is more discussion at Obsidian Wings about adding the cost of retiree plans as a component to the hourly compensation.

I think the important point is that companies like GM once had 400,000 workers and now they have 73,000 workers. Much fewer workers to absorb the retiree costs; however, it was the gains in efficency that permitted GM to have fewer workers. I would be more interested in knowing the cost of retiree healthcare as a percentage of GM revenue ($160 billion).

I still don't see that GM has a serious problem with compensation discrepancy or that it is as large a problem as some think it is.