US vs. OECD Corporate Tax Rates

I've embarked on a study where to invest my money should the democrats and Obama take command of the government. And of the many variables I'm looking at, corporate taxes are one of them. 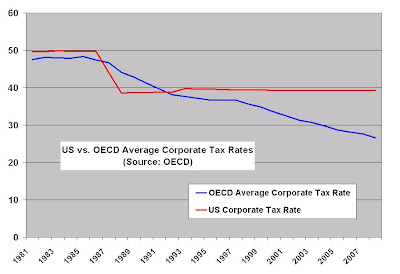 What's interesting about this chart however is that ultimately, what forces governments to spend within their means is not the people all of the sudden getting their heads out of their asses and starting to look at things like the federal budget and social security and voting to reign in the budget. Rather, instead, it's the fact governments tax and regulate to such an extent they create a hostile environment to business to the point business decides to pull up its roots and move elsewhere (Haliburton moving off to Abu Dhabi is a perfect example). In other words, it's the good old fashioned law of capitalism known as competition that still governs and forces economic entities, even as large as the US federal government, to ultimately and inevitably live within their means because there is competition for those corporate tax dollars and smart countries are realizing that if they lower their corporate tax rate they could perhaps poach significant tax revenues from other countries.

Of course, we all hate those evil icky, mean corporations. So thank heavens they're leaving..and given the 'change' that's coming, who can blame them?
Posted by Captain Capitalism at 12:59 PM

Look on the bright side: Obama is going to fall several million jobs short of his promise as American businesses cut back on employment or move overseas.

As long as he can't continue to blame Bush, he'll go down in history as a failed social experiment. The next Republican candidate's slogan is going to be, "We'll never make THAT mistake again!"

The brighter side is that the fate of the Democrat Congress will go hand in hand with Obama's and Hillary Clinton will be shut out of running in 2012 no matter how bad it gets.

The campaign against Obama doesn't end tomorrow night. That's when it begins!