I know, I know. We're not socialist.

I know, I know. The democrats are not for socialism.

And I know, I know, the republicans cannot gear up the gall to call them that. 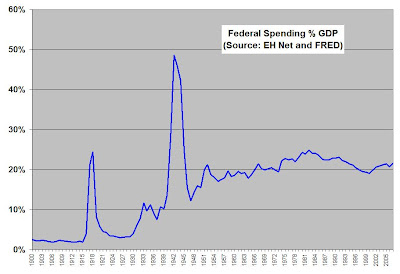 So the question I post to all you aspiring, junior, deputy, official and otherwise economists out there is, fine, we may not be socialist now, but if the democrats and Obama were to have their way (which they will) will you admit we WILL be a socialist nation?

This debate rages between me and my Obama supporting friends. That I am a "fool" a "moron" to suggest we're going to become a "socialist" nation. You fool, you do not know of what you speak. To which I respond "yes, the one economist in the group does not know what he's talking about. Oh sure, the sax player and the admin assistant and the lifetime student in journalism, they know what they're talking about when it comes to taxes and fiscal policy, but I am the moron of the group when it comes to these things." But that doesn't change the fact at what point, what level of government spending is a country deemed a socialist nation?

It's an important question to ask because if the republicans are "going to get tough" like they say they are, are they going to gear up the gall to call the democrats what they technically and economically would be considered; socialists?

This would be a brilliant PR campaign. They wouldn't be lying. They would be calling the democrats what they are. And (for once) they could make a clear, distinguishable difference between them and the democrats (not to mention a track record that will be against everything Obama does from hence forth and will come in handy come 2012).

Of course, relying of the current strategerists in the republican party to realize and recommend this would be like them fielding a candidate like Reagan again. But one can hope.
Posted by Captain Capitalism at 1:43 PM

I have so much more respect for socialists who admit what they are. (Well, perhaps it is not respect, but at least they have the balls to tell the truth.) They are simply incorrect about their assesment of what is best for mankind. The people who really scare me are the people who follow them blindly. Without the support of these people socialism wouldn't stand a chance.

I think the bigger test will be to see what the government does with its stakes in banks. Do they sell their shares quickly or do they maintain their ownership in order to finance their pet projects? Likewise with the car companies. Do they take an ownership stake in order to force them to build more cars nobody wants, or do they let them (and the unions) die.

"at what point, what level of government spending is a country deemed a socialist nation?"

I was hoping you'd answer that question eventually. We're listening.

I am continually amazed at how the Obamaniacs continue to declare, without any factual backing whatsoever, that people in the know just "don't know what they are talking about."

Funny, how the same does not seem to work in reverse.

Socialism is defined as the economic system of collective ownership of the means of production. Therefore, formally a country could only be socialist when the government contributes more than 50% of GDP. However, the numbers you cite include also redistribution programs. Government consumption of goods and services, and therefore contribution to GDP, is at less than 20% in total (including local and states). Even Sweden doesn't get this number higher than 25%.

So I would use the term "socialism light". Of course, that doesn't change the fact that, in their hearts, all the Obamas in this world really want is real socialism.

Ah, Mr. Trum, but do you see the forest from the trees.

If I don't "own" the stock, but still get 37% of the profits, does it really matter if I actually "own" the shares?

You own shares to be entitled to the profits. If somebody take 50% of them, even if they aren't a shareholder, they effectively are a 50% owner anyway.

I'm perpetually amazed that people who would never argue medicine with a physician, never argue law with an attorney, and never argue car repairs with a mechanic will not only argue economics with an economist, they'll tell us we're wrong!

Bingo! Cap is right - it doesn't matter whether government owns the means of production if they control it. Our mayor doesn't own the hydrid SUV he drives in, but it goes exactly where he wants it to go.

Taxes are a form of control beyond the point where firms are paying for their share of public goods. Not all government expenditures are socialism, but it's a close approximation. Redistribution is a closely associated policy of socialist ideology, although not definitive.

We are already socialist. We just don't say so. When one incents and disincents the market to control it, that is socialism without ownership.
But you already know this and are bear baiting us all, yes?

I like the chart. I didn't realize that there was actually a decrease in government spending during the Reagan years. I just assumed that spending would have increased due to military build-up in reaction to the Soviet Union.

Far out - adsense put up an ad for the "Barack Obama Inaugural Dollar" for me on this post. I can own a piece of history! Order Now! Oh yippee. That'll be just what I need in a few years as I sneak off to my illicit garden for a few bites of unapproved eating to avoid the bread lines. What? Didn't know it could be illegal to raise your own food in excess of a government quota and eat it yourself? Heck, the U.S. Supreme Court confirmed the fed power grab for this in Wickard v. Filburn in 1942 (and what sort of president was in charge at the time?). Now virtually our entire agriculture system is under some sort of fed control through subsidies or other regulation. None of that control shows up in any GDP calculation, but it's there nonetheless. They don't have to own the means of production to effectively control it, and control is what really counts. The fascists never really cared about ownership - only control.

Quote from drtrum: "So I would use the term "socialism light"."

I would suggest we call them what they are, Fascists.

Between their control of all levels of government, political and bureaucratic, control of most of the media, the unions, the schools, their intimate relationships with all major industries, especially defense, and now the cartelization or direct governmental control of the financial industry and who knows what else, it's Fascism.

There might not have been a 'grand plan' being followed with a single powerful and charismatic leader (until now), but the results fit the definition perfectly.

I'd even go a step further and say fascism and socialism is basically the same, just in different colors. Both try to abolish freedom.

Concerning the debate around what term to use for the system we currently live in, I'd ask everyone of you to come up with a fitting term. Socialism is not the correct term, although politics tend to go in that direction. As David and Robert Miller said, it's the government's desire for control what makes it different from a (classical) liberal capitalist system, and it's the lack of ownership that makes it different from socialism.

I do agree that the stated policies of the Democrats would advance the state of socialism faster than would those of the Republicans.

However, given the trend lines the the graph, as someone else mentioned, the two Bushes were more socialist than Clinton. That makes it rather hard for the current Republicans to accuse the Democrats of being socialist, when their most recent leaders were worse.

Interesting quote that somebody else said: "Socialism is identical, for all practical purposes, with communism. Their only difference is the speed with which they accomplish their identical goals."

WRT to the fascism comments, it is important to realize that there are at least two axes on which to measure the political spectrum -- socialism vs capitalism and totalitarianism vs libertarianism. Most current governments are trending towards totalitarianism.

the two Bushes were more socialist than Clinton

They were not more socialist than Clinton. OK, Bush sr. raised taxes. Clinton did the same. Bush jr. lowered taxes and tried to privatize Social Security. The Republican congress was socialist because it fought against him.

I'd actually have to disagree on the "You shouldn't argue with an economist if you yourself are not an economist" argument.

Suppose it's Princeton's Paul Krugman, the Nobel Prize-winning economist who believes strictly in big government and high taxes that you are arguing?

I'd tell him that he was wrong on many issues. Just because I am not an economist, doesn't mean I wouldn't be able to debate him. The problem isn't whether a person is or is not a political scientist and trying to argue politics, or is or is not an economist when arguing economics, it's WHAT FACTS ARE THEY CITING FOR THEIR ARGUMENT!?

But many people, with NO KNOWLEDGE WHATSOEVER of politics, economics, government, etc...think they are fully, 100% qualified to state what the government should do for this or that such crises.

I have read a fair share of economics books, and read about various types of economics, and about tax issues, etc...so even though I am not an official economist, I think I am qualified to argue on basic economic issues even with economists.

This is what the National Socialists (Nazis) did in Germany, and also the fascists in Italy under Mussolini. And FDR tried it here with his National Industrial Recovery Act, but the Supreme Court shot it down.

On the contrary, you can have a system in which prices ultimately ration the resources, but the government maintains a very large presence through heavy regulation, high taxes, etc...like France for example. In this, you have what is ultimately a capitalist economy --- the resources are still rationed by the price system, but it has many socialist elements.

Fascism is in general any society that is socialist (socialism is really a variant of fascism according to some) or allows private property ownership, and private ownership of the means of production, but the government plays such a huge role in the economy that each industry ends up being taken over by a monopoly or an oligopoly of companies, so that one ends up with the same result as with pure socialism, i.e. one big bureaucracy in charge of each industry.

For example, the FDA regulates the drug industry to such an incredible degree that the industry is controlled by an oligopoly of big drug corporations who have no threat of competition because no entrepreneurs really enter the industry, because the regulation is so excessive.

The big tobacco companies also bought themselves a cartel essentially by being ruled against in court, and thus taxed very highly, as the big tabacco companies can handle this, but the little ones get wiped out.

Yeah, Reagan decreased government spending as a percentage of GDP, but not as much as Clinton. Bush did his level best to destroy those gains, though.