Obama's Effect on the Stock Market

There was much speculation and discussion about whether or not the market had "priced" an Obama and socialist party victory into stock prices. And up on Obama winning the market promptly tanked 4% the very next day (and the day after). Of course there are those out there who contend that the market tanking had nothing to do with Obama and his propensity to increase corporate taxes, but I was sent an outstanding chart by a reader from George named Geoff. 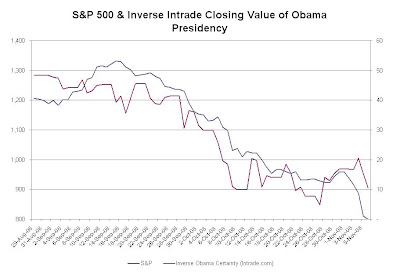 The chart above shows Obama's Intrade closing value versus the S&P 500. Obama's trade value was inverted so as to show the relationship between stock market values and his likelihood of being elected.

The correlation is quite strong coming in above a .9 correlation coefficient. Of course I will readily admit that there was most certainly other things going on in the market that had nothing to do with Barack that drove the price of stocks down while Barack's Intrade value was going up. However, I am willing to bet the free pony Obama has promised me that even after adjusting for these figures the market was trading down based on the fact Obama would increase taxes on not just corporations but people as well.

You have to understand right now that I am more or less just preaching to the choir, as I've found to try to talk rationally or logically with Obama supporters is quite pointless as no matter how much data or logic you throw at them, you still get "hope and change and, uh, you know stuff." So now, all I'm doing is just creating and empirical record so that when there are bread lines I can show those people in the breadlines some neat charts from 3 years ago that explain why they're waiting in line for bread in the first place.
Posted by Captain Capitalism at 9:59 AM

I'm more or less sympathetic with your point, but the cause and effect could easily run the other way - or both ways.

The economy tanking caused Obama to get elected.

It is quite the swindle the Democrats pulled. They drove Fannie Ma to buy sub-prime mortgages. Stopped the Republicans from reigning in Fannie Ma. And then, when the economy tanked, got elected for it.

Correlation doesn't have to mean cause. It's probably rather the stock market crash that increased the probability of Obama winning the election.

There is a question of causation here. Many people believe it was the sagging economy that boosted Obama's chances for election.

It could be that the falling stock market caused Obama's election, rather than Obama's probability of winning affecting the stock market.

Of course, that doesn't explain the drop in the stock market after he was elected.

A Granger causality test might be able to identify the association between the two variables.

It could also be the case that the two variables were jointly determined.

Looks like the "certainty" of my gas & mortgage being paid has gone up also! When do you think the checks will start arriving?

There's not very many of us, but I suspect your dancing skills might put you ahead in that race.

Now, if she were to decide that she likes video game playing economists who also like anime, and it narrows the field even further.

Apparently captain, you and me are just about the entire target demographic for the video game based on Spice and Wolf, a series occasionally referred to as "Economics: the Anime".

So, enough rambling. Obama won; we're boned. Now I get to make snarky comments about moving to Ireland.

The spice and wolf video game is only in Japanese, but at least the tv series was popular enough to garner a second season. The target demographic may be larger then you think.

Now I get to make snarky comments about moving to Ireland.

I don't know if Ireland deserves the good reputation that it has today. It's a little bit ironic that you and the Captain talk about moving to a country which has seen an even bigger housing bubble crashing than the US. Household debt stands at 190% of GDP, thanks to excessive borrowing due to low ECB interest rates (Milton Friedman warned them).

Individual income taxes are quite high, 41% for over 34,000 Euros(http://www.worldwide-tax.com/ireland/ireland_tax.asp).

According to Wikipedia "All persons resident in Ireland are entitled to receive health care through the public health care system, which is managed by the Health Service Executive and funded by general taxation"

Uhuh, so is Obama gonna transform the US of A into another Ireland?

For the sake of the economy, I will date Jennifer Aniston.

I miss Reagan. You think we will ever have a President again that listens to economists that know what the hell they are talking about?

The one thing I can say in opposition to the idea of a link is that it seems that the market is dropping a day or two before Obama's support follows. So we have to assume that investors knew what was going to happen before it happened.

And, hey, if we assume these people ARE watching the news for what's coming down the pike, then you've got a reasonable argument that exactly that might be so.