A thing the media likes to do is measure the occurrence of one word or another to see if it's likely to come true. The most common example of this is the "Recession Index" where the word recession tends to predict actual recessions. However, what is interesting is "depression" is being cited more in the media ("media" consisting of The New York Times, the WSJ and the London Times) than even during the Great Depression. 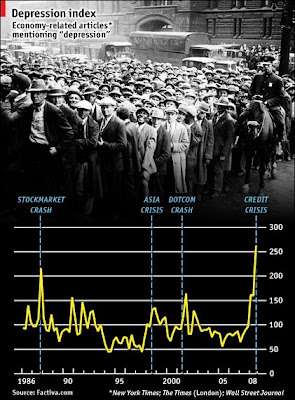 This is just one of what is now an increasing number of charts showing various things out of whack MORE than they were right before the Great Depression.

All currently at higher levels (or at least before the stock and housing markets started to tank anyway) than what they were before the Great Depression.

To this day what I cannot understand is with these figures how it took Wall Street, economists and various other finance professionals to take until 200-freaking-8 to predict a recession. I was almost angry that the economy didn't go into a recession in the first half of 2008, let alone 2007 which is when I was predicting the economy would (arguably as early as 2006, but I'd have to check my posts).

Regardless, nobody listens to poor Cappy. And only if Wall Street did, would they, along with the rest of America be avoiding this current financial crisis.
Posted by Captain Capitalism at 6:38 AM

I keep talking to people in denial that say things like, "This can't be as bad as the Great Depression because we have technology now." Another one is, "But people still have jobs." Do not underestimate the power of DENIAL. I also love, "The economy was so much smaller then."

While I certainly agree with your assessment of indicators, I'm not so sure about the importance of the graphic. There's too little context in just the image, I would like to look at their method. It seems that they are only averaging over three papers (right?) -- have those papers expanded in their content? (e.g. are the scales between then and now comparable?) etc.

As an aside, I would be interested in knowing which has more predictive power, the absolute frequency of such terms or time derivatives such as "velocit" or "acceleration" in their use.

The difference today is that we can't let a depression happen. In times past a depression could be allowed to happen, and the eventual result after some years would be a war that would produce full employment and a booming economy.

Just looking at the car industry, if the big three go bankrupt and do not pay their suppliers the suppliers go bankrupt and the ripple effects tear apart the interlocking business infrastructure that allowed supply chains to be built on the fly as needed. When you study centrally planned (i.e. communist) economies, their weakness is they cannot react quickly to changing conditions and cannot react intelligently at the small scale because of the centralized control. Sometimes they can react more quickly but only to a national goal type of situation, not to millions of small problems where the capitalist system with its highly distributed intelligence excels.

A capitalist system does not have this drawback, so long as a critical mass of businesses that supply each other exists. The depression destroys this critical mass and it takes a long time or a jump start (such as a war) to rebuild it. Once the depression spiral starts, it is hard to stop. There must be a benefit for someone, otherwise it would not be allowed to happen.

Today, the problem is that the depression leads to a war, and the war would feature the use of 20,000 hydrogen bombs. This could well destroy civilization if not humanity itself.

If I remember correctly, you predicted the market would dip below 7700. As of today, you were right.

The Greater Depression is here somewhere. It's probably sitting in a dark corner of the bar drinking gin with the Iraq Civil War.

You know what I would love to see? A list of economists who, as of 2007, had predicted the current recession, as well as a list of those who explicitly assured us that everything is fine.

It'd be a lot of work, but if you happen to find one it'd be fantastic. :)

You know what I would love to see? A list of economists who, as of 2007, had predicted the current recession, as well as a list of those who explicitly assured us that everything is fine.

It'd be a lot of work, but if you happen to find one it'd be fantastic. :)

I suppose you just look at the list of economists who endorsed Obama.