The Captain is Victorious

I spent $60 on an out of state fishing license for South Dakota.

My economist mind went to work and after pricing fillets of fish at the local supermarket, I figured I would need to catch 7.5 sizeable fish to fillet them and earn back the savings to pay for my fishing license.

Of course I haven't caught a damn fish worth filleting, but the old adage is true;

Fairburn agates, as they call them, are South Dakota's state rock. Seemingly "nothing exciting" to the untrained eye, their intricate patterns is what makes them quite valuable in the gem world. I wouldn't have even considered them gems, but given their prices range from anywhere from $20 for El Crapo ones to $40,000 for the more insanely rare ones, they are a more profitable venture than trying to pan for gold.

In any case, your Captain has been victorious in his hunt for Fairburn Agates. Found three of them today! 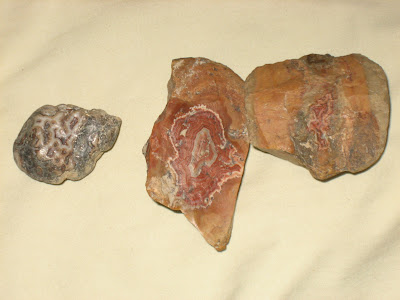 Now, I know, I know. All the cappy cap girls MUST learn to control themselves, because not only is your dear Captain an accomplished fossil hunter, tornado chaser, economist, video game player AND ballroom, dancer, he is now a successful FAIRBURN AGATE HUNTER.

You may swoon now.

Sadly only 48 more hours of vacation, and then a SLOW, ENJOYABLE trip back to the communist, Al Franken, Crocus Pot Smoking Hippie Hill, POS land known as Minnesota.

? - is this why we haven't been hit by inflation yet? Nobody knows the money supply is exploding?

You know as much as I'd like toi imagine our Captain as the dashing Indiana Jones character....

I can't shake the feeling that Agate hunting involves a lot of staring at the ground& rock faces, as you walk with slow stumbling motion, muttering to yourself, covered in dust and sweating profusely in the sun.

"Hey Mr. Ruggedly Handsome - are those fairborne agates in your pocket or are you just happy to see me?"

Eww... The one on the left looks like a brain.

Cap: leaving this post here since I don't see an email address for you.

Here's a link from the Times in the UK authored by a fairly high profile Brit who had an encounter with the Canadian healthcare system. Let it serve as a warning to those who think socialized healthcare is all puppies and ice cream.

Wait! Were you there in Nebraska with me??? How did you know that's what I did???

Errr...wait, I fought many natives, and had my buddy land the plane in a nearby river, and foiled many booby traps and battled my way back to the plane to escape just in time.

Actually, everything you described is true, EXCEPT, I had downloaded some podcasts of Michael Savage and was listening to them while I slowly hunched over acres of rocks.

Those look like pretty nice agates. Cut, polished and mounted, they'll probably be beautiful agates. Sounds like you had a good trip! :)

I can only imagine, most activities involving geology involve: Freezing, Broiling, Drowning and doing things that appear to outside observers as somewhere between mad as hatter, and quietly retarded.

Actually a lot of worthwhile endeavours like practical engineering, programming are about as photogenic as that...

Those that look dashing and cool are usually stupid and pointless inthe end.

"Quietly retarded."
I about fell off my chair laughing......