What Precisely Is Debt

I will make this short, not only because I'm on vacation, but because I genuinely believe in keeping this important lesson simple, because it is that; simple.

Debt for most of our everyday use is used to purchase large ticket items like houses or cars that we do not have the great sum of cash for, but can instead borrow the money and pay it back over time with interest.

Another form of "debt" that is in the daily use of the average person is short term debt, such as credit cards. This form of debt is not that we don't have the money now, it's just that it's easier to carry a credit or debit card as opposed to cash. This "tab" is then paid up monthly (unless of course you're like 70% of the American public and just decide to let it build up into a $50,000 credit card balance).

However, "debt" is also measured from a macro-economic perspective where we add up all the debts of corporations, people, and governments. The relevancy of this "total debt" figure is not its use as in mortgage debt or credit card debt, but rather a testament to the laziness of a nation.

Let me say that again;

"The total debt of a nation, including personal, corporate and governmental debt, is a testament or measure of the laziness of a nation."

The reason why is this,

Debt is the difference between what the people of a nation consume versus what they produce.

You see, we (or any other nation) produce a certain amount of production every year. We call this GDP. We produce GDP because that is what we not only like to consume, but trade with one another. So I go and teach dance classes and sell books, so that I might raise the money to buy food and pay for martini's.

However, if I'm a spoiled suburbanite princess, or perhaps a socialist president who wants to blow $3 trillion on social programs, we like to consume MORE than what we produce.

This results in a difference or "deficit" between what we produce and what we consume.

Ultimately these deficits accumulate into "debt"

Now, to measure how lazy a nation is we should compare our total laziness (debt) against our total production. Thankfully some nice men and women at Bloomberg have done so already; 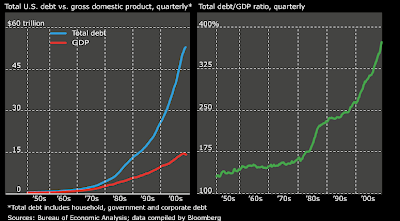 It looks like, assuming Americans keep spending more than they make, we'll consume 4 times they amount we've produced, and that is frankly criminally greedy. No different than the bankers and scumbuckets who caused the financial crisis. But where is all this debt coming from?

You see, if we keep going along promising ourselves free food, free clothing, free shelter, free health care treating them as if they were "rights" and not what they really are (commodities) since they are "rights" nobody is going to work or "produce" for them. This not only lowers our production, but since we've (and when I say "we've" I really mean the socialists in congress and the socialist Barack Obama) promised ourselves free health care and unicorns and cars and ice cream, we will have to incur more debt relative to our production.

The long and short end of this lesson is a very simple, childish one, which most American adults seem to have a real hard time understanding;

If nobody works and everything is "paid for" nothing will be produced and even though you think you're "entitled" to these "rights," the reality is that of Soviet Russia;

Empty food shelves
Bread lines
And no, I'm sorry little Taylor, you don't get your I-Pod for Christmas. Hear some government issued coal (green coal of course).
Posted by Captain Capitalism at 3:39 PM

My parents debt rose from $2000 to over 50K in unsecured debt in the last 12 years. They, like most Americans, were not in dire need of money, but merely kept increasing their standard of living faster than their income rose. I talked them into meeting with a BK lawyer this week.

I promise to create more value than they destroyed.

"It looks like, assuming Americans keep spending more than they make, we'll consume 4 times they amount we've produced, and that is frankly criminally greedy.

Captain, I think you're either misunderstanding your charts or you're using misleading wording to make a point. America has not consumed four times what it has produced, because your chart doesn't compare total production to total debt. On the contrary, it shows production over a limited time period compared to total accumulated debt that we've been building up for decades. Debt accumulates over time, and the chart in question shows a single quarter's worth of GDP.

A more meaningful comparison for showing how much we're producing vs how much we're consuming would be the rate at which debt is increasing as a function of GDP. Or for a measure of individual responsibility you could look at the private savings rate, since any measure of debt that includes the fiscal irresponsibility of the government is going to skew the results hard towards the "people are goddamn financial idiots" end of the scale.

By the way, according to the BEA, the personal savings rate is about 5% of disposable income, a little over double the average for the past decade or so.

It would take 4 years of complete production and NO consumption to pay back our debts.

We would all be very skinny.

What kills me with this, is that like with immigration, if you actually followed what "americans" think and said:

"Do you want the gov to spend within it's means?" You'd probably get most people agreeing.

"Do you want immigration controlled and limited to some reasonbel percentage?" You'd get most people saying yes, too.

Politicians "write the checks", and while most people aren't adverse to a little government largesse, the "people" aren't in charge here.

Sure, they could elect fiscally responsible pols.... if any were offered up. But said pol wouldn't get any special interests supporting them either.

It would take 4 years of complete production and NO consumption to pay back our debts.

We would all be very skinny."

The chart lists production per quarter, so it'd take about a year. I still think it's a pretty crazy level of debt, but even Japan (which runs about as big a debt as any industrialized nation) is only up to about 170% of their GDP in debt. I'm sure lenders would bug out and flee long before we hit the 400% mark.

Anonymous, as for people agreeing about being in favor of "reasonable" government policies, that's kind of a loaded question. Of course nobody is going to say they oppose reasonable policies, but there's huge disagreement over what reasonable policy entails. There are people out there (damn them to hell) who think Obama's doing a great job.

Hi!
I came across your blog (http://captaincapitalism.blogspot.com/2009/08/what-precisely-is-debt.html) while I was going through some finance blogs. You have shared with us very valuable information, I must say...Being impressed with your blog content, and I would like to place one relevant article in your blog and in return you link in my finance related website/blog. If you allow me to do so and give me an opportunity to show my blog/website to you for link exchange purpose, then kindly.

I am glad you clarified what debt is really about. It's true that debt is the difference between what we use and what we produce. This is something we really miss out on. In other words spending more than what we produce will be a blueprint for financial disaster.

Evelyn Guzman
http://www.debtchallenges.com (If you want to visit, just click but if it doesn’t work, copy and paste it onto your browser.)

This is the most depressing chart I've seen in a while. The US might as well accept that we're really a third world country.

Debt is what you get when Congress loses the A and an E from "debate".

It is most commonly used in the phrase, "Til debt do us part."

Ryan, while what you are saying is true, the Debt to Income Ratio is a standard measure of financial impairment.

To give an example for comparison, the student loans I took out to support my family during grad school took eight years to build, but the ratio of that debt to my income is still less than 1. Even so, it will take another 28 years to pay it off at my current payment rate and total principle and interest will be about four times my current income.

Now consider US debt is four times our national income and a growing amount of our budget is becoming nondiscretionary. Do the math and you'll get CCs point.

"Now consider US debt is four times our national income and a growing amount of our budget is becoming nondiscretionary. Do the math and you'll get CCs point."

It's only four times our national income if you measure our income quarterly instead of annually. That's not very common. Zimbabwe (the most debt-ridden country in the world) has ~240% debt to GDP ratio.

One of the points I made in my initial response was that quarterly numbers can make for misleading measures. Anyway, while I agree that debt as a function of GDP is a useful measure of financial impairment, the Captain was focusing more on the "people are lazy and irresponsible" angle, which I think is better illustrated by changes in the amount of debt and the personal savings rate.

Great post. I read questions and answers at experts123.com and people have many questions about debt related topics that many of us would consider basic in nature.