Dear "Parents of Criminal Children Who Keep Saying 'He Was a Good Kid',"

I speak for everybody when I say the following:

He was a piece of shit.

And you, by default, were a piece of shit parent.

You failed to bring up a reliable, responsible child because you were a lousy, lazy, pathetic failure of a parent who was too lazy to instill the basic moral lessons in your illegitimate offspring because you were too busy watching daytime TV or getting knocked up by the next latest loser.

So have yourself a cup of STFU, collect your welfare check, and continue to piss away the one finite life you have with Schlitz beer, meth, and a loose crotch.

The Rest of Society

Here's the photo.  You should note TWO things.  One obvious, one not so. 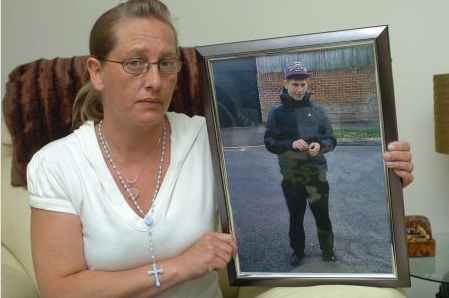 Posted by Captain Capitalism at 9:13 PM

Reminds me of this:

As usual, you go entirely too far.

The bling on her sleeve. Forbidden by her covenant with the Saviour.

1. Wearing a rosary as a necklace. (Irritating to us Catholics).
2. No dad.

and that includes Trayvon and all of his Trayvonite supporters and parents as well.

I hope the owner of the stolen motorcycle was able to recover the cost of the bike.

And WTF is a dole rotter doing with an expensive fur coat?

As for this being "too far" ... screw that. This is a war. Being a polite Canadian only works when you are dealing with other Canadians.

Not too far. Because the young kid is dead and (if you want to include another example) Trayvon is dead.

If more people like me heaped the shame upon the miserable failure of parents isntead of cowardly "sparing their feelings" then you wouldn't have dead kids, not to mention the crimes they committed.

We have not gone far enough in this country, taking the pansy motherly route out of things when it comes to shame, standards and rearing, and this is the consequence.

I want hundreds of subpar parents to read this, initially get angry at me, but then start thinking about their kids. AND THEN MAYBE we might prevent shit like this from happening.

until then, everybody can have candle light vigils and peace rallies and whatever touchy feely crap that doesn't work and then wonder why their kids are still dying.

"As usual, you go entirely too far."

Oh go away would you?

Comment on the original article by Orpington chap: "this woman didn't bring him up as she spent time in prison and deans grandparents raised him now he has passed she's playing the doting mother Lisa didn't you ask dean to bring drugs to you and when you were at deans tree you sat there skinning up with his mates your a hypocrite that loves all this attention your house is a drug den and you been make accusations to the other boys famil"

You're right on cap. The world is a better place without this piece of shit breathing, but it sounds like he never had a chance. She's the real piece of shit.

Most of what you say is true. But please keep in mind there is an inborn criminal element to some people.

I can point to families who have several boys. Most turn out fine, but there's the one who is consistently into trouble. They all were raised the same way by the same people, so what happened?

Kids are shaped by parents but also come into the world with their own traits.

That said, you might next think to chastise women who breed with criminals. This is where the problem really starts. You're not going to get a would-be Bill Gates when a wannabe Charles Manson is the dad.

She is unmarried and dad is not on the scene.

This is why you spank your damn kids.

Bravo - in my province we have just had a terrible accident where 6 teenagers died in a car accident - the accident happened at four in the morning. The ages of the teenagers were 13, 14, 14, 15, 16 and 17. Great outpouring of sympathy for the parents - me - not so much. I have sympathy for the kids who died because they didn't have parents who were acting as parents and now they have no future; I feel sorry for their siblings and friends because from this moment on there will be a hole in their lives FOREVER. Sympathy for the parents - no; anger at the parents. Who the hell allows their 13 and 14 year old girls to be out driving around the backroads of our province with boys at 4 IN THE MORNING!!!! Huge fail on the part of the parents and they should be shamed!

-anon w/ the 'days of broken arrows' footer has a valid point. You do get the odd Middle Child Syndrome gone amok kid in an otherwise normal passel of rugrats.

Based on what other comments here added to the story, an ex-con single mom who DIDN'T have a kid who would grow up to continue the tradition would be more surprising than this.

Also, why to Protestants insist on wearing Catholic religious paraphernalia as jewelry? Aside from being passe and distasteful, I mean. Guess it didn't come up at the trailer park. Not so many romanists in those places.

I've noticed in the U.S. that when something like this, or worse, happens outside our inner-city ghettos, there's usually some neighbor who says something like "yeah, he was always a troublemaker" or "we knew he was a little off in the head". Americans are finally wising up. Or maybe our crime reporters are.

"You failed to bring up a reliable, responsible child because you were a lousy, lazy, pathetic failure of a parent who was too lazy to instill the basic moral lessons in your illegitimate offspring because you were too busy watching daytime TV or getting knocked up by the next latest loser."

But Captain, aren't you also a single parent who is dating?

Unless the kids are completely grown and out of the house making their own way in the world, I have to ask the question:

What in the hell are single parents doing "dating" and having girlfriends (or boyfriends)?

Cappy is not a single parent, he has no child, has repeatedly expressed his dislike of children, and has had a vasectomy so he never has to worry about having a child.

Your attempt to portray him as a hypocrite falls flat.

Kurt. As far as I'm aware Cappy does have 1 son. Right Cappy?

I recall a photo of him here on this blog.

Cappy, am I mistaken?