The Economy That Was Immune to Keynesian Viagra

I did a post a while ago showing just what a waste education has become by calculating how much GDP is yielded per dollar in educational spending.  This ratio was essentially a "return on investment" for the now trillion dollars we spend on education annually and showed not only diminishing marginal returns but just what a sad and pathetic lot populates the education industry.

But then I got an idea while motorcycling around.

Since Obama, Krugman, and every other leftist economist out there is constantly plugging Keynesian stimulus and government spending as the way to get the economy out of its doldrums (still waiting by the way guys, anytime time now), I figured a similar calculation would be called for in that if there's a ratio that would measure Keynesian success, it would be GDP per dollar in federal government spending.  In short, since there is that *COUGH COUGH WHEEZE WHEEZE* "multiplier effect" a dollar in government spending should result in multiple amounts of GDP.

So here it is: 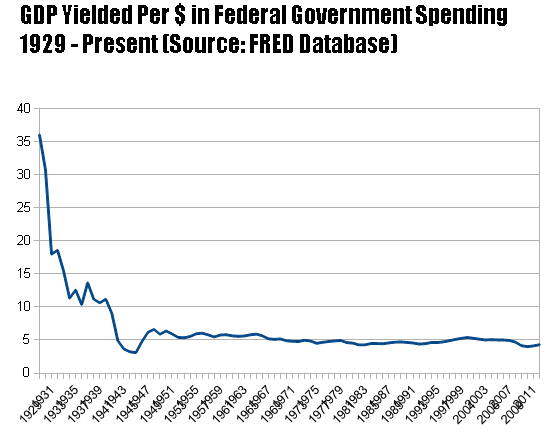 You'll note that the Great Depression and WWII skew things a bit.  When nearly half of your production goes into the war effort, you can expect some odd ratios, so I made another chart post WWII, but keeping 1945 in there so you can see where we came from: 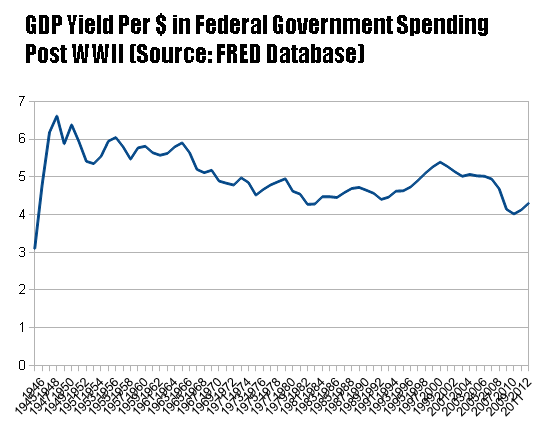 And shucks howdy, look at that.  Just like education spending, it looks like federal government spending just isn't getting the bang for the buck it used to.  In those "evil 50's" you would get $6.50 in GDP for every $1 in government spending, now we only get $4.30.  Matter of fact, in the short 5 years since America's first socialist president took over we lost nearly a buck in GDP per government dollar of spending.  The Keynesian Viagra just isn't taking, so what is going on?

It's very simple - government spending does not, in fact, contribute to economic growth.  It takes away from economic growth and merely redistributes wealth with a production or efficiency loss.

If you look at what leftists and Keynesians advocate, they advocate merely moving money around in the economy to get things "shaking up a bit" in the childish and naive hopes this jostling will get the economy going again.  The problem is this "shaking things up a bit" means taking money from productive people (or the future via borrowing) and giving it to Barack Obama's biggest supporters - economically worthless, productionless parasites.

Of course people will argue not all of the stimulus spending is handouts and income transfers.  Why there are billions of dollars of grants, investments, etc., that go to bail out companies, invest in new technologies, etc.  And this is true.  Such government spending DOES get some modicum of return in the form of GDP...just not as much as if it remained in the private sector.

I need not remind people of the spectacular failure and losses of Solyndra and the score of other connected-cronies of Obama who faked like they were serious about building a solar company.  I need not remind people of the billions spent on worthless social programs and the employees that manage them that not only fail to solve the social ailment they contend they're trying to fix, but also results in fake GDP as nothing anybody REALLY wanted was produced.  And wasn't there a bridge (though in a Republican's district) to the middle of nowhere?  Again, Keynesian spending might get a bang for its federal government buck, but comes nowhere near as productive and high as the private sector.

No, the truth is that not only is government spending inherently NOT economic production, when you give it to the least productive and parasitic groups of people in the nation to either not produce at all or to fake producing (so public school teachers can claim they have some kind of "career" while their students shoot each other and can't read out of high school), you can expect the economy to stagnate and the ratios we have charted above.

But what's really precious is how so many people think the likes of Obama and Krugman are still well-intending, just misled about economics.  The reality is they hate this country, they hate freedom, they hate success, they hate liberty, and they make their careers off of giving an ignorant electorate their undeserved pound of by destroying the country.

Enjoy the decline!
Posted by Captain Capitalism at 2:30 AM

The Republican 'bridge to nowhere' was supposed to connect one of the Aleutian Islands to a highway. The few citizens didn't ask for the bridge or need it.

Fortunately it was a Republican boondoggle, so between budget watchdog groups and the Democrat press desire to embarrass the Republicans, it was stopped and not built.

speaking of parasites, what's the cost of subsidizing and policing the urban core of our once great cities cities?

Hey captain you need to see this video. this girl needs to write a book telling women how to be better for their men.

it's very much like taking from the best performing investing the worst performing stocks in the market, and then expecting growth overall.

This chart shows a fiscal multiplier of about 4:1. To say that I'm skeptical of this would be a significant understatement.

I would assume a ratio of less than 1:1.

Just like the control of the currency was stolen from crongress to be given to the Federal Reserve (Article 13 of the constitution says Congress should coin money), the Idea of "keynesian" stimulus has been stolen from the Idea that the governmeent should "create" money in order to invest in real stimulus like basic economic infrastructures along with scientic endeavors (like going to the moon), which creates the environnement for private sector to develop new technologies and businesses. Thus economic growth.

Government is there simply to create the blood of the economy (currency) and the will to succeed (endeavors). The rest is for the private sector to figure out.

If you just move money around.. it clearly is no true investment.

Being a non US citizen.. I guess you may excuse me ;)

I've heard more than one of my leftist friends (who are no longer friends - don't waste your precious time with them) say something like: "if we didn't give poor people welfare, they would riot and burn the city down."

Leftists see welfare as a bribe to not misbehave, which is bigoted of course. So your economic analysis does not take this asset destruction into account. Keynesians should be thrilled at the prospect of rebuilding our cities after the riots, though - talk about broken window fallacy on steroids!

The notion that the same dollar, put into and withdrawn from the same banking system, spent in the same markets, paying the exact same workers, buying the exact same goods and services, will do more for the economy simply becuse it was taken by taxes should be the most ridiculous idea to any thinking person.

In other words, even the 4.3x they're estimating today is nonsense. Rep. Baniaian (of the former SCSU Scholars blog and the SCSU econ faculty) noted a couple of years back that 1.5 was more realistic, and I would be surprised if the actual return for a lot of the "spendumore" plan was greater than 0.5.

Best post from you in a loooong time. Spot on!

Nice little video on plastics from the 50's or so, when America was great.

Don't worry Captain. Soon you will see GDP coming up much faster! After all, they've revised the way they calculate it so they can count intangible investments (expenses) in GDP.

It's a beautiful accounting trick, allowing the government to double count R&D, consulting fees, actor's salaries, etc. It's like watching the Ministry of Truth in action, and soon all of the old records of GDP will be pushed down the memory holes.

Lets not forget that most of the cost of government spending isn't paid by the economy in the years it is spent as it is debt financed.
The drag on the economy that is taxes isn't fully realized so the picture is even rosier then it should be.

Shorter version: GDP is growing more slowly than government expenditures because most government money is transferred from potentially productive uses to genuinely parasitical ones.

You know... from my ECON 101 class.... even Keynes would disagree with what they are doing. He specifically stated that any government spending had to actually PURCHASE products from the private sector to increase GDP. AND that either taxes had to be raised or spending cut when in a deficit.

The current crop of idiots is doing neither. They all just want to keep spending.
They are Keynesian like the progressives are liberal.

They are WORSE than Keynesian.

Anyone who does not know about Milton Friedman this might be worth a watch.

This is just an opinion on the economy, because of the socialist shift in America we will continue to blow bubble after bubble. To me it seems we cannot correctly value and allocate resources. If you can correctly see this ahead of others you have a potential to make a lot of money.

Is your graph just another way of saying that government spending has been in the range of 17 to 25% since the end of WWII?

I've always thought that the best way to inject funds/capital into an economy was to not take it out in the first place.