I live in arguably the crappiest house in the one of the richest towns of Minnesota. Desperate to escape the city, the crime, and the unexplainable property taxes, not to mention the leftist culture (which if you know Seward, you know precisely what I'm talking about), I escaped the city and found a cheap place in a suburb far, far away.

However, though I am not rich by any means, nor am I part of the culture, I reside in an area where Mercedes are standard, Lotuses are common, and the cops have on more than one occasion immediately turned around and tailed my donk (1990 Chevy) late at night until they realized I lived here. This has given me an unexpected perspective and insight into the world of the "rich." Combine that with the fact I've worked for several local banks and I've seen the financial statements of a fair amount of these "rich" people and I have a pretty good grasp of what is going on.

For the most part, "rich" people are not "rich."

Invest it in assets of varying levels of legitimacy, a disproportionate percent of which are dubious.

List inflated values on their personal balance sheets when looking to borrow more.

And brag either in words (by talking up dumb bimbos at bars) or in toys (by buying cars they can't afford with other people's money).

Out of all the "rich" people here, I would have to say only 15% of them are legitimately rich, with positive net worths. Take out trust fund babies and you can knock off about another 5-10%.

Regardless, it calls into question those that are really "rich" in this world. 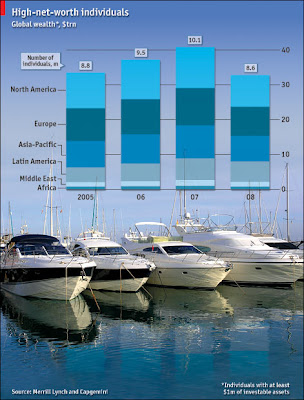 How many of them ever made money in the first place? How many had positive cash flows in their global operations? How many of them have assets that are worth anything in the first place? And with a nearly 25% drop in "high net worth individuals" it tells you that "wealth" in this world is not based off of income, or cash flow, or profits, but rather asset prices, which is basically worthless paper gains.
Posted by Captain Capitalism at 12:23 AM

Thought this was funny. And for any of you who haven't seen the movie that this paradies, it's "Downfall". Great film about the last days in Hitler's bunker, I highly recommend it.

Live lean. Took me a lot of debt, and a lot of wasted interest on that debt before I learned that lesson.

Positive net worth is the way to go. I drive a 14 year old car, not because I cannot afford a new one, but because I do not want to pay for a new one.

Too many "rich" people that talk all the time about how much everything they own is worth cannot afford to buy a cup of coffee without using credit. That's not rich, that's just sad. I cannot understand how someone that is supposedly "rich" actually runs a balance on their credit cards. Boggles the mind really. If you are rich, why is it impossible for you to pay off your credit card purchases every month?

But, when the market tanks, they are lining up for a government handout, even though their take home pay is in the $100K a year range. I could buy and sell these losers, and I am a safe distance from rich.

"Regardless, it calls into question those that are really "rich" in this world."

Being rich and being a conspicuous consumer are very different things. People with a high net worth tend to live below their means; even if they have a relatively high paying job, they won't stand out too much.

Gee, this reinforces the message in "The Millionaire Next Door".

Periodically through life when we are struggling, I point out a couple that seem to have "everything" - nice house, new cars, a boat, snowmobiles, ATVs etc. and wonder aloud how they do it to my spouse. Her answer never wavers -"they're in debt up to their eyeballs".

Considering that our only debt is a < $30K balance left on our mortgage.

I never thought that we'd be considered rich (except by Democrats who want to punish people who work hard and are successful).

BTW - I think the "poster boy" for the "rich who aren't really rich" is Denny Hecker - who went from "auto magnate" to $767 million in debt when the auto manufacturers pulled his line of credit because he was over-extended. Poof! His "empire" crashed, not with a bang, but with a series of whimpers.