Despite the conversation we're having about the merits of medals, we should all salute the major for his service. Here are his medals; 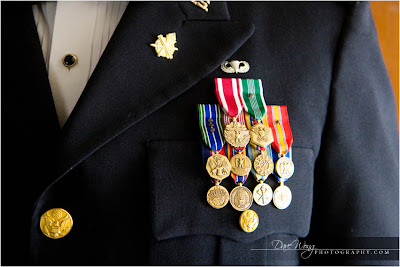 Pay him a visit sometime.
Posted by Captain Capitalism at 11:54 PM

Is that a good conduct metal hiding under that MSM?

Not to belittle the man's service to his country, but his highest award is the "meritorious service" medal, which is for particularly intrepid desk pilots.

Heh, that's more medals than what i got and what anybody else here has.

Very good eye, Geoih. Yes, that's a GCM. I was enlisted for 4 years. Out of all those medals, that's the only one I really value.

Yes, Anonymous, I never served in combat and I don't compare myself to those who did. Some guys just get lucky.

I was a Communications Officer in a Special Forces unit for five years and an Infantry officer for 7 years. Indeed, I got the MSM for flying a desk in my last assignment.

The closest I came to combat was a tour in Kosovo as a Civil Affairs officer. We wore the battle rattle and got the pay, but we never heard a shot fired in anger. We dodged a few landmines and UXO, but mostly we drank coffee with local officials and NGOs and did humanitarian projects.

A third of my life, though, was spent under a rucksack as a grunt, some of it in sub-zero weather in the mountains of Colorado. I spent more than a year of my life at Ft. Beginning.

I was also a Jumpmaster with 33 jumps. I didn't get the star on my wings because I was 2 jumps short with combat equipment. We didn't have high-performance aircraft during Desert Storm and Desert Shield and we couldn't jump with combat equipment out of helicopters. For some strange reason, all our jumps in Jumpmaster School were Hollywood.

I didn't avoid combat, I was just lucky. I was in Germany right at the end of the Cold War. I graduated from the Infantry Officer Basic Course on the same day we invaded Panama.

During the Persian Gulf War, my Special Forces unit was held in reserve...for a particular country in Asia.

I came back on Active Duty shortly after the Iraq War began. In fact, I rejoined because of the war. But since I had a PhD and university teaching experience, I was assigned to teach ROTC at UC Berkeley where an advanced degree was required for all professors.

I injured my back and neck during training in 2004 and had two unrelated surgeries in 2006. I retired in 2007 because I couldn't carry combat equipment anymore.

Many of the cadets I trained have served or are serving in OIF and OEF right now. Two of our former cadets were wounded; ironically both of them are Korean-Americans named Kim. One had a slight bullet wound and the other got badly injured by an IED. Thank God none of our men or women have been killed.

I honor the soldiers who served in combat. I don't regret not having a combat patch but I regret not going there to do my job. Unlike the few snivelling cowards who refuse deployment for political reasons, the vast majority of soldiers look forward to going into theater.

When you're a fireman, you don't want to rush into a burning building, but if a building is burning, that's where you want to be.

There is an etiquette to these medals not well known outside the military. For instance, a Silver Star on an officer may safely elicit a yawn, as many of these were given out for political or career-advancement reasons. On an enlisted man, however, the Silver Star is a bona fide award for heroism. Such men should not be yawned at.

Here's the quick and easy way to evaluate someone's collection of fruit salad: memorize the colors and pattern of the ribbon for the Bronze Star. This is just about the minimum award for combat service. Since medals are worn in order of their importance, top to bottom, you may safely ignore anything below the Bronze Star. They will be campaign medals or good conduct medals or foreign medals, etc.

You can also watch for the Combat Infantryman's Badge. This one marks a real fighter, an infantry combat veteran, one of those that did the hard and essential work of the Army.

Not to belittle the man's service to his country, but his highest award is the "meritorious service" medal, which is for particularly intrepid desk pilots.

I noticed paratrooper wings above the fruit salad. Throw yourself out of a plane a few times, then we'll talk.

Quote from Anonymous: "Not to belittle the man's service to his country, but his highest award is the "meritorious service" medal, which is for particularly intrepid desk pilots."

I applaud the good Major's service.

NtindraTell me something Anon: If this nation was blessed with 20 years without war, how many soldiers (including Generals and senior NCOs) would have combat experience?

Would that long period of peace excuse us from being prepared for war? Would all the awards and service below a Bronze Star still be meaningless? Are policemen and firemen only valuable with extraordinary acts of valor? Lots of people with CIBs never heard a shot fired.

Being a soldier is a job, a duty, a commitment, a lifestyle, a responsibility and a burden. I got injured worse from 20 years of training than most people got in combat. It doesn't take much courage or effort to get killed in combat. The Purple Heart and POW medals, they say, are the only awards given to you by the enemy.

I just found out today my best friend from childhood became Chief of Police in our home town. His wonderful mother just passed away. I honor his and her service. I'm not sure what medals he has, if any. I'm sure she got none and deserved many.

I don't expect any parades for me. The novelty of salutes, ribbons, and sir wore off a long time ago. I judge my work by the success of the soldiers I trained. If they live through the war because of something I taught them, I'll be thrilled.