At least once a week I see a 30 something mom. She has her children in the car with her. They are toddlers and thus have car seats as well as their mom hovering over them, trying to maintain order and avoid chaos as she tries to pump gas into her Subaru Forrester or some kind of SUV.

On the car though is invariably an Obama/Biden sticker.

Now I've made this chart before, but I think it behooves reshowing because it proves something Joe Soucheray always says; 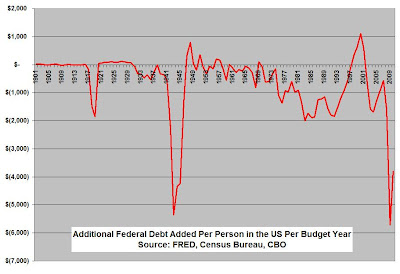 What this basically means is that when a leftist makes a decision, they cannot follow the chain of events that decision will trigger. They cannot see what the ramifications and consequences are of their actions. And what the chart above shows is how much new federal government debt has been saddled on each individual American.

And this is the point I am trying to make. These Obama Soccer Moms have NO CLUE what they've just done to their children. Not a clue. Be it ignorance about government finances, be it they're just suppose to stay at home and bring up the kids, but leave the finances to daddy, or they're too busy dreaming about the Magic Obama Unicorn Obama's promised to give them with the Obama Unicorn program, this particular Obama Soccer Mom has no clue she's just indebted her 3 children to the tune of $60,000.

Now I know, I know, she didn't "mean" to enslave her children to the government's debt, just like teenage mothers didn't mean to bring an innocent child into a life of abject poverty, but for once could I admit a bit of economic shadenfreude and say it's good to see people having to pay the price for having "good intentions" with no desire to have the intellectual rigor to see if those intentions are achievable, let alone adult?
Posted by Captain Capitalism at 8:27 AM

Schadenfreude is one thing, but those kids are paying for their parents mistakes. Of course, every generation does that.

Women will be big beneficiaries of Obama's spending. Women by and large are used to having others pay their way. Why should soccer moms differ?

Is this chart adjusted for inflation? I remember asking this last time you posted this chart and I don't remember getting an answer.

problem is it's the kids that get the smelly end of the stick not the moms.i've voted conservative my entire life,but my kids will get dragged down because Canada has hitched her star to America.

I assume that you're not suggesting that the debt bulge of 1941 was a bad idea.

I'd also bet a lot of those soccer moms with the Obama/Biden stickers are financially well off enough that they don't have a job.

Those soccer moms will care when their husbands give more of their paycheck to the government and they lose their mini vans.