Waterstone Apartments: A Microcosm of Fascism

An acquaintance of mine lives in an apartment complex called "Waterstone."

Littered across the hallways and elevators are little "notices/updates" that provide me with the perfect documentation of the evolution of fascism on a microcosmic scale. Understand this complex is under a management team, that as far as I can tell consists of nothing but idealistic 20/30 somethings, predominantly female, who have swallowed whole all the leftist BS and tripe that has come down the pipe.

I originally intended to post these as they came, but I got lazy. However, upon my latest mission (dun dun dunnnnn)

OPERATION CLEAN OUT ALL THE CRAP IN YOUR HOUSE

I've rediscovered some of these notices and I've decided to start scanning in and posting all these notices the Waterstone "family" has made in an effort to document yet another small segment of society that has frankly gone batsh!t insane and succumbed to believing the crap they were indoctrinated in back in college and high school as they form their own little Third Reich.

Enjoy. For the benefit of the readers I have made some of my own commentary as well as highlighted things that will make your eyes roll or which would also prompt Joe Soucheray to say "B as in B, S as in S." 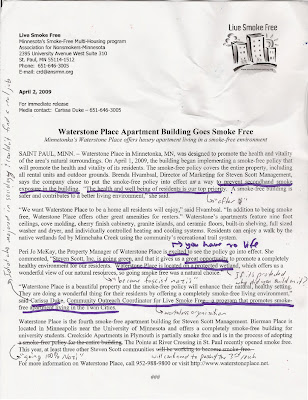 Posted by Captain Capitalism at 6:22 PM

Sorry, Cap, but for once I have to disagree with your Godwinian conclusion. As a nice elderly, tattooed* gentleman once informed me, "In Auschwitz, they let us smoke."


* On his forearm, in case anyone was wondering.

I think some aren't taking this pc drivel as seriously as they are supposed to. For shame.

This post reminded me of something I read seven years ago.

Sorry if I don't share your outrage, since my neighbor's cigarette smoke sometimes seeps under the front door of my apartment and stinks up the place. So long as they aren't forcing other property owners to ban smoking against their wishes, I don't see what's wrong about this.

The stupid thing is, there's a perfectly good economic reason to disallow smoking in a rental building: secondhand smoke buildup will destroy the carpet, drapes, and anything else with fibres, and stain the paint. Fixing that up for the next tenant Costs Money.

Although to be honest, I'm having trouble seeing how a private company setting rules for the use of its own property by its tenants qualifies as "fascist". It looks more to me like "free-market capitalism". The simple fact is that non-smokers outnumber smokers by a significant margin, and they're more likely to attract tenants to a smoke-free building. Sure, they're lying about their motives, but *gasp* a company pretending to care about its customers so they can get more of them? Yeah, that's never happened.

Gentlemen, you are all missing my point. It is the Orwellian tone and the outright lies that anger me.

Yes, choosing to go smoke free as a response to your tenants' demands is free market. But as I post more of these "notices" you'll see what I'm talking about.

It is the "do what I want you to do, because it is better for 'everyone'" that is the problem here.

And, that is the problem.

I have a good friend that owns a condo near DC. The condo board consists of a child psychologist (currently unemployed) an interior decorator, and a one other person, I forget what she does, a basket weaver or something. Not 5 minutes of property management, business management, or accounting among them. But, they are posting the "Let's do this because it is better for everyone." notes, and making condo decisions based on the same demented mentality. Example:
The laundry room in the basement floods every time there is more then 1/4" of rain. All they had to to was grade the ground at the base of the building to drain the water away from the building. But, they painted the mailboxes instead.
The gutter downspout fell off, and the parking lot floods. So, they bought new chairs for the board meetings.
And, the list goes on and one.

Okay, I'll give our illustrious host the benefit of the doubt that this is merely the tip of the iceberg. I do have one question: is this a rental or condo building? And if it's a rental, do the landlord-tenant laws of the municipality allow the property owner to essentially rewrite the leases without penalty?

It's a rental building, but you got me on whether they can rewrite those laws based on the tenant agreement.

You'll see though, the hair on the back of your neck goes up when you read some of these things.

I just love your notes in the margins and between the lines. What absolute BS they're pedaling!

I used to get cards from an apartment manager who ended every sentence with an exclamation point and dotted the i in her name with a smily face.

These insipid wenches irritate me. It's worse when they are giving you some cutesie, BS reason why they can't refund your security deposit.

I can't stand the smell of smoke and I can, in fact, smell it under the door when someone walks by smoking. If they want a smoke-free apartment complex, that's cool with me. It's their property.

Please continue with the funny letters.

Ok, suppose you've a smoker who has lived in that building for 5 years and have 11 months left on your new lease.

I think if I were a smoker in their property, I think I'd go on smoking ( and raise the ante with cigars) then ask them to pay for smoking cessation sessions since they changed the terms of their lease and then after they declined, dare them to evict me.

Regardless of ones opinion of smoke free apartments, the real point of concern is the righteous tone of the management, and especially the fact that it took one page to write 'YOU CAN'T SMOKE HERE'