Diversity Over Excellence, the London High Rise Fire and KTCMO 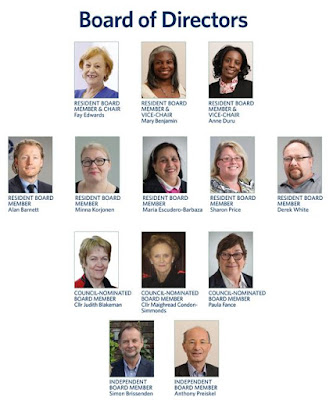 You see, people's safety is not as important as diversity.

But what did you expect from a country hell bent on committing suicide?
Posted by Captain Capitalism at 5:00 AM

The only two people in that picture who actually look intelligent, are the two men on the bottom.

I think I counted 9 women to 4 men? That's equality UK sjw style.....I'm sure the ladies just wanted the building to be painted in pretty colours so the children could look up at their castle in the clouds...... bunch of wagons.....

Ah the memories this brings back! Many years ago a buddy and I rented a fourth floor apartment. Just after signing the lease, the local paper published an article that the complex had HUNDREDS of fire code violations. The place was a wood frame structure :-) . We were stuck there for a year, so, I had to come up with something. I built a big wooden spool and wrapped it with enough thick rope to reach the ground twice over. The rope had a huge snap shackle on the free end, and a pair of leather gloves was duct taped to the reel. The plan was to snap the rope to my balcony railing, toss the reel off the balcony, and slide to safety wearing the gloves to protect my hands.

Instead of whining and waiting for big daddy government to save my ass, I came up with my own plan. The spool worked fine when I tried it one morning at about three AM. Sliding down a one inch diameter rope is way harder than it looks, you tend to spin around and have to fight for control. Good thing nobody saw me and called the cops :-)

In regard to the UK fire, My prediction is either nobody goes to jail or they scapegoat a low paid, Beta Bitch Boy male employee who has not done any safety checks for years, with the full knowledge of management. Management can now " discover " the problem, express fake shock and dismay, and punish the evil doer. Worked 17 years in banking, seen it done many times.

It'll be interesting to know which of them go to jail. I have a sneaking suspicion that it won't be the women.

Yes but those two are the only independent members of the board. All others are council nominated.
Figures they had probably no voting chance against the affirmative action board.