As I have gotten older, done more and more research and honed my "Super Awesome Economic Genius (TM)," I have learned that we folks of the capitalist, liberty, free-market stripe are not so much battling a legitimate counter theory to our free-market economics, as much as we are a spectacular level of ignorance.  So spectacular that I wouldn't even call it "ignorance" as I believe it really is more of a mental disorder ("delusional" is what I believe psychologists call it).

Of course I am miffed in that I foolishly credited my ideological opponents with having intelligence, veracity, intellectual honesty and a desire to seek what is best for mankind.  Miffed, not because they turned out to be nothing but self-serving spoiled brats with no interest in searching for the truth, but miffed because I wasted so much time trying to engage them on an intellectually honest and mature adult level.  Literally thousands of hours wasted compiling chart after chart, pulling up data, crunching numbers, all the while thinking,

"Ah, this will prove my point and convince them!  And soon they will vote based on fact, empirical data and what's best for the country.  And soon our country will reap the benefits of an informed and educated population and we'll achieve new heights and income per capitas of $100,000."

But now that I've been proven to have overestimated the honor and integrity of my ideological opponents, there's just one thing left to do.

Of course they make this laughably easy in that they exhibit their delusion daily, refusing to live in the real world.  And I know that in violating The Reality Principle they are merely setting themselves up for an even harder crash in the future, but it's still fun to make fun of them while they're accelerating their lives into an inevitable brick wall.  But their behavior is so delusional it almost warrants it's own subsegment of economic study.  And so with this let me introduce a new concept:

As you know the Captain has a soft spot for Jennifer Aniston.  If  she were to show up at my doorstep in a drunken stupor, I suppose I would do the good, correct and right thing all preacher's kids do and help the poor girl out.  She would make lewd advances at me and I would have to refuse those advances because it would be inappropriate.  She would no doubt recognize who I am and say,

And again, because of my pure and virtuous nature, I would have to refuse her wanton advances.

But that is the point right there about "Jennifer Aniston Economics."

Never mind the chances of Jennifer Aniston showing up at my apartment in an inebriated state is unlikely.  And never mind she has no clue who I am (despite my world-renown Super Economic Economic Genius (TM)).  I'm not going to let FACT or REALITY get in the way of what I want to  believe.  That is the epitome of "Jennifer Aniston Economics" and a trait that is the hallmark of every liberal and socialist in the world.  And so permit me a little case study in "Jennifer Aniston Economics" that prompted me to write this little post.

I saw this article about people voting in the "anti-austerity" party or "voting bloc."  And it really drove the point home to me not only how delusional people were about the fiscal REALITIES of their countries, but how pervasive and widespread this mental sickness is.  In France the majority of voters spoke and opted to pursue a delusional, impossible reality.  In Italy and Greece people are starting to rally against the "austerity parties."  But whichever country and whichever the case, you have to realize the sheer insanity and sickness these people have.  Voting against the "austerity parties" is like voting against "gravity" or "air" or "Newtonian physics."  It's REALITY.  There's nothing you can do about it.

For example, I could show this chart to every idiotic moron in France, Italy and Greece who thinks the party can continue on; 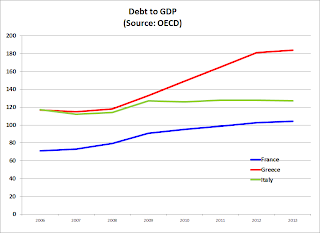 and they'll all ignore it, no doubt calling me names in the process.

So that leaves us with only one option.  Let's test our Junior, Deputy, Aspiring, Renegade, Official or Otherwise Economist skills, shall we?

Posted by Captain Capitalism at 1:00 PM

Its simpler than that.

Another shouts "Let's go home, I'm tired, its late and we all have to work tomorrow!"

I wonder which one is going to be popular.

You can be the responsible one all you want, but your never going to win over people.

Plus you're dealing with a level of ignorance, (fueled by public school lies)

They have been taught:

Neither of those statements are true

Durrrrrr
Uhhhhhhh
Hmmmmmm
...
This is way harder than my upper division communication class on the LGBT midget community.
....
Derrrrr...
(wild guess)
A!

(in all seriousness, have you seen the life of Julia Obama campaign? So mockable)

Oh, I know I know, I got this one. It's...A. right? right? hehehehe. Okay in all seriousness it is the last one.

But you forgot f, where Gerard Butler comes to sisterbrat's house. Hey if Jennifer Aniston can wander over to your casa, Gerard can wander on over to mine. Equal Opportunity Fantasy. :D

Where people have merely been misled, you should extend them the presumption of good faith.

Where you get somebody like Ezra you don't extend them the benefit of a doubt. They are cynical and will only abuse you as a result of your stupid child-like innocence toward them. Klein, of course, was the primary drum beater on the "Obamacare will be cost neutral, and will bend the cost curve" talking point. A few months ago, he wrote, "everybody knew when it was passed that Obamacare was going to cost a lot more money." You don't need to presume any longer he is arguing in good faith because he is not.

Hell, I'm going with E. When it comes to the economy, everyone's rationalization hamster spins it's poor little legs off.

But Captain, everything will be alright once we get to Tir Asleen!!

After having encountered this level of willful ignorance in many places through my daily grind over the years I am left with the conclusion that they all need psychiatric help.

Actual psychiatrists like Dr Sanity http://drsanity.blogspot.ca/ deftly defines the layers of issues these people have and make our lives miserable with. There is no hope for them.

To heck with all the charty goodness Cappy provides that is ignored. Their illness is so deep that once the decline is over with the utter devastation being be such a great truth, such an ultimate telling of how they screwed it up, they will still be blaming everybody else but themselves.

So calling it a cargo cult is to good for them.

First, by tradition e cannot be b and d.

g) b, d, and Lucy Lawless shows up at Herb's house ready to use every toy in his toybag.

The amusing thing is, on that other side, you get the exact same tirade, but about your side. The exact same complaints, but pointed the other way. Sometimes even with the dismissive, disrespectful, dehumanizing language. There are just as many actual, verifiable facts, history and perfectly well-reasoned arguments from their side, too. This is the amusing part.

The interesting part is, having grown up on that side, feeling exactly how you do, but about people on your side of it, after deciding to immerse myself in your side, I no longer think you're stupid or misguided or malicious. It's interesting to actually learn why you think the way you do, and it's enlightened me about why I think the way I do, even if I still disagree with you.

You're missing probably the one key difference between "this side" and the "other side."

This side we regularly look up UNBIASED statistics and data at places like the FRED Database, the OECD, the BLS and other places and THEN form our opinions.

We do not form our opinions and then go googling for academic journals from government professors whose data supports our ideology.

Not the other way around.

An example of the ignorant delusion:

I recently came up with what I though was a home run argument in regards to socialized healthcare: "If socialized medicine works so great, then why don't we socialize food, which is far more important? That turned out great for the Soviets, right?"

Stupid me; turns out nobody knows about millions of deaths that occurred in the USSR. Those few who are peripherally aware of them blame it on 'corruption' or party politics or some such. Not a failed economic state.

What are they teaching the kids nowadays?

"No one becomes an actor because he had a happy childhood" - William Macy.

I pay no attention to actors/actresses, musicians and athletes. I ignore them as a waste of my time.