Permit me to chide a group of people in desperate need of chiding:

People who vote based on whether a candidate is good looking or not.

Now this can fall on both men and women (I am of course partial to Kristy Noem - she scores Super Num Num Points on the Cappy Cap Scale), but when it comes to presidential elections, since we've had nothing but male candidates, my ire in this particular instance is towards female voters.

So a question to all you ladies out there who've never watched CNN or Foxnews and instead get your political news form "The Daily Show" or "The Colbert Report" - how can you possibly choose between Romney and Obama?

I mean, it's gotta be like one of those Harlequin romance novels where the female hero is sought after by a rough and tumble blue collar stud AND AT THE SAME TIME a posh, Cary Grantish fellow, who is of course rich and powerful.  How does the poor woman's torn heart choose?

Of course in this upcoming election your choice isn't between a bad boy and a rich man (both are rich, both are powerful), but rather a much simpler choice-

Now I can see how you all fell in love with Barack Obama and deemed him worthy to be leader of the free world - pecks.  Yes, they were nice weren't they.  And the media was all too willing to post pictures of them glistening as he walked out of the ocean.

But you have to admit Romney has some really GREAT hair.  Not only is it full, but it has that touch of gray.  And he is a mature man, an accomplished man a "real" man.  Dare I say he almost has a twinge of "The World's Most Interesting Man?"  His hair screams "stability" and "don't worry, I'll take care of you, I'm an accomplished man."

But how does the uninformed, uneducated and ignorant female American voter choose?  Because unlike pulp fiction, there can only be one president and I'm very curious about the though process you ladies use to make such an important decision.  Does People Magazine speculate about who would be better on a date?  Does Cosmo give you detailed gossip about the private lives of both?  Or do you and other Harlequin Political Junkies just gather around Starbucks after you drop your kids off at daycare and sup cups of cappuccino on your husbands' dimes and debate the merits of pecks vs. hair?

Regardless, I am VERY interested in how you come to an informed and wise decision, ESPECIALLY given how nice Barack's pecks are and how full and lush Romney's hair is.

Though methinks I know how you're going to vote anyway, despite what they've been trying to do to you. 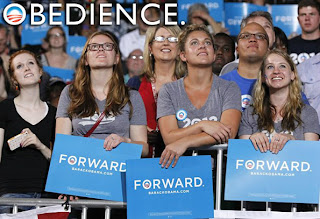 Yeah, voting on looks ain't new. Are you aware of the Kennedy/Nixon debate? At the time, Nixon was recovering from the flu and looked a bit ashen. He refused makeup (what man wears makeup?) but Kennedy let the TV makeup artists work him over. As a result, radio audiences said Nixon won the debate while TV audiences said Kennedy did.

Of course, in Kennedy's case, there was also Dr. Feelgood. In his congressional years he looked scrawny and weak, but doctors pumped him up with steroids and who knows what else so he "filled out" by the time he ran for president.

It's also said a balding man could never win the presidency again.

All proof that giving women the vote was a big mistake.

They are both rich compared to you and me, but compared to Romney, Obama is Salvation Army soup kitchen client poor. - minuteman

What a horrid picture you posted!

My vote will not be FOR Romney but AGAINST Obama.

Odd question here. That picture showed women with absolute adoration for their "man" on their faces yet the left and media (do I repeat myself) don't skewer them for it. The women who are for Romney, who being Mormon, and an active participant of the Pppppatriarchy, would be torn apart for the same level of adoration on their part.

(I'm mormon and I really was let down when he got the nomination. Yuck.)

"They are both rich compared to you and me, but compared to Romney, Obama is Salvation Army soup kitchen client poor. - minuteman"


No one really knows. On paper, Obama is actually wealthier, but Romney uses a lot of offshore accounting trickery. They're both too rich to ever worry about money...

I'm with Carnivore, but I don't think it's women as much as the youth. Eisenhower was bald and he was elected twice, not to mention his opponent was Adlai Stevenson, another balding man. This issue isn't women...it's young women and college.

Pull all government-funding for college, Raise voting age back to 21 years of age.

"Eisenhower was bald and he was elected twice..."

Don't forget that was during the Cold War era, and he had been the Commanding Officer of the European Theater during World War II; he undoubtedly got the lion's share of the veteran's vote.