I remember a while ago calculating a chart showing household debt to GDP.  This was back in the day when I was lecturing people for spending more than they earned and taking out all the money from their homes.  Of course, recessions (coupled now with banks that refuse to lend), have a tendency to make people tighten their belts.  The effect is obvious when household debt to GDP went from nearly 100%, down 14% to it's current day (though still-not-eviable) 86%.

You would think the government would do the same.  Or, if it were of a particular Keynesian stripe, merely offset this decrease with an increase of 14%.  Heck, if you really believe in Keynsianism, you wouldn't need 14%, because of the Magical Economic Farting Unicorn, whose farts bless the land below with it's magical "Multiplier Effect!"  THank you Magical Economic Farting Unicorn!  So the government would only have to increase spending by 2, maybe 3 percentage points.

No, you foolish, foolish person.  The government increased it's debt in the same time by nearly 35%. 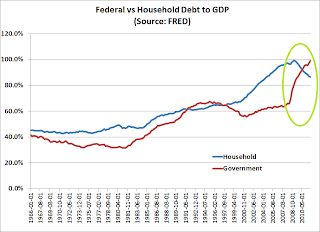 Good thing you all tightened your belts and saved so the government could incur $3 more in debt for every dollar you saved!
Posted by Captain Capitalism at 9:20 AM

Truly depressing captain. I gotta question for you. Given that government spending is more than wiping out any saving ordinary Americans do, and considering I am a member of the screwed generation, who really needs to go talk to HR about lower or eliminating the amount of money I put in my 401(k). Is it even worth it to save, outside of a small amount in cash? At least for the next decade or so I am not confident in the US or worlds economic growth prospects, and I have been seriously thinking about cutting back on my saving, outside of cash accounts and highly fungible assets like bullion. What say you on the matter?

watch my series "How Gen Y is Completely, Hoeplessly and Totally Screwed." I think part 1 or 2 I strongly recommend AGAINST saving any kind of money in a 401k or IRA.

I did watch it. It caused me to do a cost benefit analysis on my 401(k) and whether or not it made sense to keep it for now,accrue extra money from employer contributios and then withdraw it after a few years and take the tax hit. Or cease funding it all together. Still haven't come to a conclusion, but I am leaning towards just ceasing contributions.

I'm asking about savings in general. While stocks would offer me protection against inflation the taxes that would be levied upon me during a withdrawl seems to negative much of the benefit. I see many overseas nations following a similar path along the United States, this includes many developing ones, which makes me hesitant investing anymore into foreign markets. As a very frugal person I am starting to develop a strong urge to say fuck it I can't win.

Sometimes I really hate your charty goodness. It's a hard pill to swallow.


think about the implications.

This was what was happening up until the GFC. Then, the private sector decided that it could not and would not increase its debt levels any more.

So, they tried to increase their level of savings to pay down debt.

What happened? Tax revenue tanked as the economy went into recession. The government tried to stimulate the economy.

And what was the end result? A budget deficit of ~10%, a private savings rate of 5% and a trade deficit of 5%.

Understand, that it is literally impossible for every sector of the economy to be a net saver at the same time, because across the macroeconomy, spending = income.

Thus, any sector that wishes to save must do so at the expense of the savings desires of the other sectors of the economy.

The only way for there to be a domestic private sector surplus and a budget surplus at the same time, is for the united states to be a net exporter. Likely, eh?

I think you're mistaken, and households are still taking on more debt than they're paying off. The total debt level has dropped only because people are canceling their debts in bankruptcy court.

The personal savings rate was 5% + change in 2010. The private sector includes the FIRE and business sectors, which is where the majority of the successful debt reduction is happening.

Incidently, our economy is also getting fucked by the australian federal government insisting on austerity. That, and the aus housing bubble is finally bursting. Because austerity has worked, anywhere, ever, right?

But there is no inflation, because the government told me so.

If you nose around, you'll see stories about record prices for various collectables. Being in the firearms collecting gig, that's what I notice most, but I've also seen stories about everything from paintings to classic cars fetching record auction sums.

Whenever this is happening at a brisk clip across the entire collecting universe, it's a guaranteed sign of folks trying to turn worthless paper into tangibles as fast as they get it.