In addition to the social security ponzi scheme, a lesser known, though probably larger scheme, is the retirement bubble.

I've gone into detail at length before, but in short, with trillions of dollars already invested into retirement funds over the past 40 years, prompted by tax breaks provided by the government, all that has done is inflate stock prices above their intrinsic value.  This makes mutual funds, stocks other investments a bad deal for any Gen Y or Gen Xer's entering their earning years and looking to stash away for retirement.

But there's another funny little aspect to this whole retirement program thing.  Oh, you'll call me "cynical" for making this observation, but that makes it all the more true.

It's not an issue of whether younger generations SHOULD invest in retirement plans.

It's an issue of whether they even CAN in the first place.

In order to invest for retirement you need money.  And not just money, but enough money to pay for food, clothing and shelter AND have enough disposable income left over for retirement investing.  But given the wonderful economy we've had under President Fluffy Bunnies not only is that disposable income non-existent, the jobs necessary to provide ANY income is non-existent.  And thus without jobs the retirement bubble ponzi scheme I believe will collapse quicker than I thought before.

To see if data had bore me out, I pulled some stats recently from the ICI (which provided me the statistics to the post I mentioned above 6 years ago).  Since then they've made the data private, but I was still able to find two telling charts showing you that the flows into mutual funds just isn't there to continue to support the retirement bubble:

Translation - people are selling their mutual funds to make ends, NOT reinvest in other funds.

Also notable in the chart is how (despite the summer of recovery) investment in mutual funds just plain stopped in 2011.  Aside from the financial crash of 2008, this is the lowest level of investment into mutual fund AND THAT INCLUDES THE RECESSION AND DOTCOM CRASH OF 2000-2001! 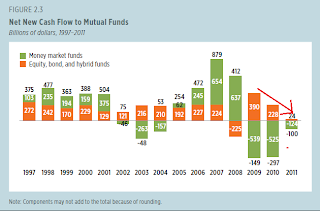 To paint an even clearer picture, just look at net contributions into equity funds.  Ignore the red line as they are merely providing that as a reference to global stock price performance, focus only on the volume of money going into or out of equity mutual funds.  What is not only painfully obvious is that no new money is flowing into equities.  Worse still, is the volume being taken out of the market in 2011. 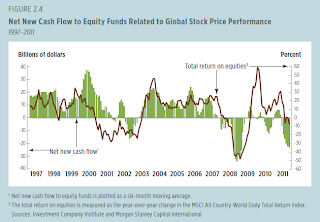 Again, what this suggests to me is not only is it so bad people are wary of the market,

not only is it so bad that the replacement generations don't have the money to invest in the market,

it's SO BAD PEOPLE ARE PULLING MONEY OUT OF THE MARKET TO MAKE ENDS MEET!

But, as you know, your beloved Captain always likes to end of a positive note, and thus the title of this post.

For you see, if there's one good thing Barack Obama did for the young blind lemmings salivating over his pecks or his turgid speeches it's that he made the economy so bad these 20 somethings won't have the money to invest in an overpriced market in the first place.

And that is the definition of "forward."

Enjoy the decline!
Posted by Captain Capitalism at 5:30 AM

What's scary is that the market keeps rising (Dow over 13K) on net outflows from equity funds and low volumes. How is that even possible? Who is buying?

>it's SO BAD PEOPLE ARE PULLING MONEY OUT OF THE MARKET TO MAKE ENDS MEET!

Even if this is accurate, we must remember that ~80% of Americans don't use a budget to set financial goals and track their spending. And women typically are worse than men. Do a Google Scholar search and you'll find a hundred studies on Americans and their financial illiteracy and irresponsibility.

Most Americans live paycheck to paycheck and constantly whine about it. But they don't want to change their spending habits. They don't want to stop eating out 10 meals a week. They buy new smartphones every 6 months. They pay for vacations with credit cards. They lease cars, or get car loans, rather than doing a bit of homework and buying a reliable used car that they can maintain themselves. etc etc etc. I don't have much sympathy for most people and their financial woes, because the woes are largely self-inflicted.

And regarding anons comment about gold, over the long term gold does not keep up with inflation. Sowell explains it in "Basic Economics."

I have a couple of IRA's but stopped putting money into them the last couple of years.

I recently decided that my 401k was not worth it given the facts the Cap has given us. I thought that 401k matching would make it worthwhile even with the early penalty fees but some new information I have recieved has changed that.

And you'll have to quuote what Sowell says in his book on basic economics, I haven't read it, but everything else he has written that I have read generally has had positive things to say about gold. Also using the average annualized inflation rate from 1775-1932 is .39%. I can't think of anything that would do better, and frankly I would assume that the .39% inflation would have more to do with the discovery of gold in california and the klondike as well as the disasterious green back policy of abe lincolns administration, and lastly the fact that the Fed had been in existance for almost two decades.

"What's scary is that the market keeps rising (Dow over 13K) on net outflows from equity funds and low volumes. How is that even possible? Who is buying?"

The corporations. They have to use buybacks because no one else will; dividends are for monkeys. Grandpa is in bonds taking 1.88% and junior has six figures of student loan debt to pay before taking in six figures of mortgage debt.

The individual investor is becoming rare, and will soon start to look really lucrative. Just watch the markets meltup in the next 10 years.

I sympathize with anonymous's analysis of the average American, but doing much stuff on credit has been going on now for at least 20 years.

Taxes and inflation are hurting everyone.

Mr. Bob and I are 33 this year. We have cashed out every single last one of our various 401K's in the last couple of years. Why? Because we have been laid off several times in the last few years due to the economy. Every time we are laid off we use up all our savings and cash out a 401K.

We aren't slackers who generally live paycheck to paycheck. I am an engineer and my husband is an attorney. Thanks to my husband's law school student loans we are barely covering everything. And lest you think we took out over $100,000 for law school we didn't, we only took out $30,000. Interest plus various holders of the loans who don't acknowledge we have other student loans means we pay an outrageous amount each month. I graduated in 2004 and took out just a little less than my husband in student loans and we pay a 1/4 of what we are paying for law school loans. The difference is they changed the laws several times since then.

We also have two kids who we don't want to see starve to death. However, our grocery budget is less than half of what I know some people get from food stamps. We also have no health insurance. We aren't lazy or stupid, this economy sucks.

I think there are 2 other things going on. Of course everyone is getting out of Money Markets, why invest in a mutual fund that pays less interest than an FDIC insured account.

Also, the "average" investor doesn't usually behave rationally. They are still scared of the 2008 bear market, and so have been moving money out of equities and into bonds, even as the value of equities rise, and bonds fall (and are poised to fall farther with interest rates so low). If you ask why they are doing this, they will tell it is because the stock market has been doing badly. Apparently people only remember bear markets.

401k's are a great way of funding inverse ETF's. That way when the next round of stock withdrawals happen you can make some money in the market for the first time in 15 years.

Hey Cap, thanks for the article...
It's true up here in Canada too. I've had to cash in my RRSP's (401k) to get by.
I think the key for X's and Y's is to NOT rely on employers, governments or markets for $. We have to just become more self-sufficient in earning income. We can earn money on our own, using our smarts and the internet. The future is in sales/marketing and advertising online.
Clint.