Time to update the data as a reader pointed out a story to me about job creation under democrats and republicans.

Turns out from last we spoke, Obama and Bush are still more or less neck and neck in terms of job creation at this point in their presidencies.  At my last post Bush had lost 100k more jobs than Obama at this time, now he is only 40k down (one could also make the point Census workers should be taken out of this and close the gap further, but, eh).  Regardless, you'll note in the chart, just like Bush's first term, it's put up or shut up time for the Obama administration.  Both at this point in time during their first terms had suffered lack luster economic growth and a lack of a booming economic recovery that typically follows recessions.  Bush pulled through (though I don't believe it is a president who can create jobs and this whole discussion is moot), while Obama's growth has started to trend below Bush's. 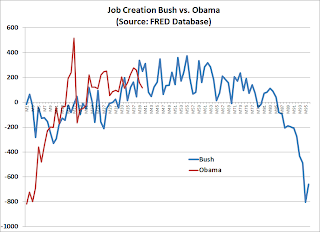 The only additional thing I will point out is that while both presidents are essentially neck and neck in job creation, Bush managed to do this with a mere fraction of the amount of debt Obama has.  But don't let me ruin your fragile little Keynesian Land of Make Believe by pointing out the spectacular failure.
Posted by Captain Capitalism at 7:43 AM

Sure... and the fake housing bubble had nothing to do with Bush job growth.

And I could go on about "sure...the fake stimulus package had nothing to do with Obama's growth."

but I don't care to be an intllectually dishonest moron like you.

What about the Dotcom bubble helping Bill Clinton?

Oh, but that doesn't count in your little world.

Lol, I was going to comment on that first Anon commenter, but, I got distracted by hoax reporting. Your response to Anon seems to have fit the bill though. It is worth noting, too, that the true unemployment wasn't near what it has been during Obama's reign of terror. So, Bush had a lot less employable people to create jobs with. I'm not saying Bush was all that great, but compared to what we have today, he was a freaking economic genius.

Your chart is quite misleading. Bush added over 900,000 GOVERNMENT jobs(Republicans and there smaller government). Obama's number doesn't take into account that since he took office government jobs has gone DOWN by 607,000. Net those numbers out of your number and then look at private sector job creation and try to tell me they're neck and neck.

Isn't it weird how halfway through the Bush administration, his job creation numbers start going down? And wasn't that about the same time when the Democrats took control of Congress?