It is common knowledge that "married men live longer."  However, I had a theory that the "premium" or the added years of life that come from being married are shrinking as a percentage of life expectancy.

In other words, that premium is vanishing and there may come the point in time that single men live longer than married men.

I tried looking up the data to see if I could actually go back and historically calculate what the premium was and if it has indeed been shrinking relative to life expectancies.  I was unsuccessful (though I only tried for an hour) and instead came up with this report which more or less confirmed my hunch. 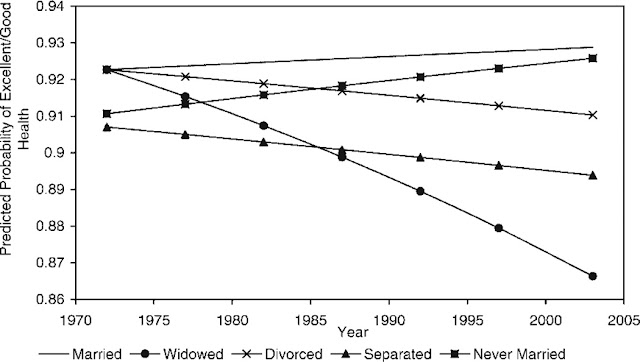 Though it doesn't speak directly of life expectancy (and if anybody knows where the data is, I'd appreciate it), the chart does show a correlation between various types of marital status and probability of good/excellent health.  Those married are on the top and have consistently been on the top.  What is really interesting is the trends.

First, the life expectancy of married men is increasing, but not by much.  It's essentially stagnant.  But HOT on its tail is the presupposed "loser" - the never married male.  The never married male is about to close the (or maybe already has) in terms of health.

Second, and this one REALLY exposes the fallacy "married men live longer" is what happens to the health of people who get divorced or separated.  They are trending DOWNWARD.  The risk here should be very obvious. Yes, you CAN get married and you CAN enjoy better health, BUT THIS ASSUMES YOU STAY MARRIED.  Ergo, the argument of "married men live longer," usually used to cajole men into marriage, speaks NOTHING of the risks of getting divorced.  And since half of all marriages end in divorce AND THE MAJORITY OF THOSE DIVORCES ARE INSTIGATED BY WOMEN, you should be taking a cumulative projection of married, divorced and separated life expectancies.  This cumulative projection was not calculated by the authors of this study, but just eyeballing it and knowing you have to weight divorce by at least 50% you KNOW MARRIAGE AS A WHOLE IS A BAD PROPOSITION FOR YOUR HEALTH IF YOU ARE A MALE.

Now, the scientists who conducted this study chalk the advances in single male health to better and more frequent use of health care.  They of course have to be politically correct.  I'd say (and it shows in the divorced/separated category) that it is the deterioration of marriage, specifically the deterioration in the quality and caliber of your average woman AND man.  The question is who is deteriorating more.

That trend of never-married males is telling.  I'd LOVE to see the female equivalent.

Update from Dalrock.
Posted by Captain Capitalism at 9:20 AM

My problem with the "married men live longer" canard is that correlation != causation. My own theory is that marital status has little to do with lifespan, it's just that since marriage is historically something that "normal" people do, married people live longer because we're comparing normals to social outcasts. The reason the married life expectancy premium is eroding is because not marrying is becoming more socially acceptable (and necessary), hence more normal people are moving into the "never-married" column.

good post as always but I think your analysis of the causes is flawed.

it seems likely to me that the demographic composition if unmarried men is approaching that of married men. that feels like a reasonable explanation.

but your cost benefit analysis looks right to me

Did you use the men's graph are the "both sexes" graph?

Was it not the great philosopher Rodney Dangerfield who said that "Married men don't necessarily live longer; it just feels that way."

The married life expectancy premium has never applied to those who manage their own health (fitness, eating right, supplements) and practice potential life extension (Resveratrol, ALA chelation, Melatonin) while still single.

I think this has to do with money and societal expectations. Back in the day, wealthy men were expected to get married and raise kids, while poorer folks were more frequently left out. Now, we see that divorced men don't live as long probably because they are forced to transfer their savings and live in poverty, while single men (who are no longer expected to marry) have enough cash to live high quality lives. Nothing beats the pooling of resources afforded to those that can stay married.

I agree with Mr. Forney.

I would argue the reverse. Marriage does not improve lifespan, rather visibly healthy men are more likely to be selected by women. Divorce, on the other hand, reduces lifespan because the stress of being thrown out of your own house and losing access to your children is incredible.

Divorce can be great for your health if you divorce a drug addict who is stealing all your money. Instant stress reliever.

Ah, nothing like feminine hypergamy visible in full view...

Ah, nothing like feminine hypergamy visible in full view...

Mere Italian princes aren't good enough for the likes of her.

Looking at the graph, my bullshit detector went apeshit. It's highly unlikely that you'd get 5 data lines all with perfectly linear trends.

Just checked the source paper. The graph you posted isn't based on hard data, the title is *Estimated trends in self-rated health*. They're using a mathematical model to estimate trends.

I think they're taking notes from the climate scientists...

If you are referring to the Terman study that started in the 1920 - which is the most widely quotes - it does not conclude that Marriage extends your life - in fact the opposite is obvious. Bella DePaulo in her blog at Psychology Today was dissecting the data from this study. The only conclusion is that Divorced mens' lives are shortened. But its inescapable that Divorced Men have to be included in the "was married" group. People that stayed single OR stayed married lived the longest. SO one can only conclude that marriage shortens a mans life as it adds the risk of divorce.

I think you have used the aggregate (men + women) graph. The by sex graphs are here: http://www.ncbi.nlm.nih.gov/pmc/articles/PMC3150568/figure/F2/

but that does not alter your reasoning or conclusions (except married men's health levels really ARE stagnated).