I had almost forgotten one of my favorite charts- comparing housing starts to unemployment.

The reason I like this chart is because any significant drop in housing starts can predict, anywhere from 6-18 months in advance, a jump and peak in unemployment.  There are many theoertical explanations for this, but I believe that as housing is the single largest purchase anybody makes, it therefore is also the single largest consumer of material goods and services.  Therefore to build a house requires a lot of employment in every sector that goes into making, mining, cutting, transporting and building them.  It is also a predictor of additional employment as the little ladies LOOOOVE furnishing new houses with tons of unnecessary crap err....um..."furniture and fixings" which also triggers employment in other areas. 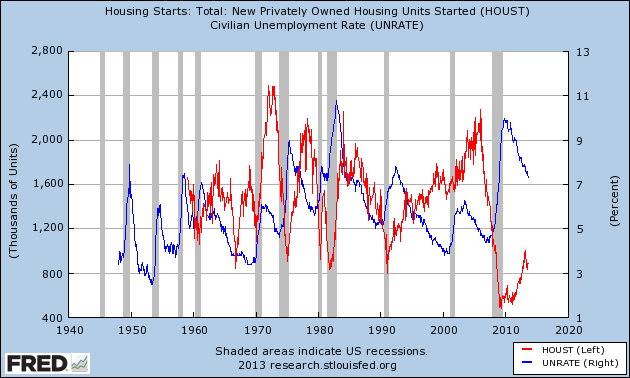 The charts shows that as the housing market has made a slow, but sure recovery unemployment has gone in a near-mirror image.  Also note the severity of the housing crash (the worst ever recorded) coincides with the second-worst unemployment peak.  And just as it has been a slow recovery in housing (we're not even back to normal) the PRECISE same thing can be said about employment - slow and not even back to normal.

Now, I'm not foolish enough to credit all of an economy's employment to housing, but isn't it interesting it seems this tepid recovery in housing has done more to help the economy than the $5 trillion in Keynesian wealth transfers to the parasitic classes?

I now, I know.  Correlation is not causation.  You lefty economists and social "scientists" keep telling yourselves that.
Posted by Captain Capitalism at 1:05 PM

Why don't you look at the chart and see which precedes the other?