I remember getting a comment from somewhere, where the commenter said,

"Oh, yeah, went to his site and saw all this gold and silver stuff, total psycho."

suggesting that I was some kind of doomsday prepper and if you invested in silver or gold you were pejoratively one of "those guys."

However, let us be very clear what this is.  This is nothing more than shaming language deployed by one of the many and varied sorts of (typically) leftists groups that either through ignorance or conscious desire want to bring about their ideological dream by shaming others they don't agree with.

We've seen this many times before.

The traditional, conservative christian movement is berating the men in their congregations to "man up" and "marry up" when the quality and caliber of women isn't even enough for secular bachelors to propose.

The mindless everyday people of a democrat variety who get angry when they find out you've gone Galt and aren't going to work your hardest any more.  They have and will continue to claim, "Oh, what, poor baby, picking up his toys and going home!" in an attempt to shame you into working more hours at higher tax rates to, basically, support them.

And of course feminists or liberal women who, if any any point in time you disagree with them about...well....anything, will immediately call you "gay" or claim "you can't get any" etc. etc.

For those of us experienced or independent minded, this is Somali pirates challenging the USS Ronald Reagan.  But most other people have a default psychological response to feel shame or start questioning why they are doing things, so let me defend precious metals and prepping and explain why it is very wise.

First, anybody remember Katrina?  You remember the public service announcement campaign by FEMA and the Feds telling us to have X amount of days of water, have a back up plan, have a back up communications, etc. etc.

Understand prepping is a wise thing if for any reason else than an emergency.  You should, just like you have car insurance, have SOME semblance of a prep plan including a first aid kid, some safety gear, communications gear, a gun, and so forth.  Because if an emergency does occur and you are caught out in the open, it will be those same people mocking you for being a prepper that mock you for not being prepared.

Second, investing in gold and silver is not "crazy" nor does it make you "one of those people."  Investing in silver and gold is a WISE move that EVERYBODY should do.  The reason why is simple - it is an insurance.  An insurance against a collapsing currency and a way for you to protect the YEARS of your life you spend building up wealth.  And just like health insurance or car insurance, you hope you don't have to use it, but you are happy when a currency collapses that you do have it.  To that end. 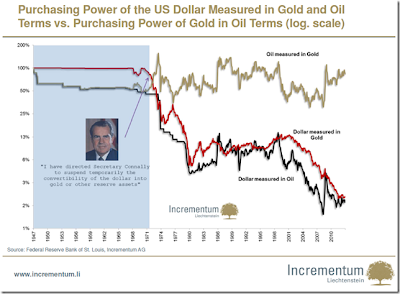 No idiotic child, ignorant of basic economics who accuses you of being one of "those people" has ever spent a second of their lives to study something like the above chart.  It would get in the way of their cable-TV watching time and distract them from having the education-government-parent complex kiss their ass.

But, perhaps as they sit there with their masters in English, working at McDonald's, they'll have enough time to ponder why they're wrong as they serve you "crazy preppers" your fries.

Enjoy the decline!
Posted by Captain Capitalism at 8:29 AM

The only shaming language I would listen to on gold is from a fellow libertarian:

He does NOT recommend staying in American dollars, just getting foreign currency in foreign bank accounts (the only trustworthy foreign currency being Canadian, Australian, or Swiss, as Euro-zone exposure has ruined most of the EU countries as hyperinflation protection areas.)

The big trouble with gold is that all governments will collaborate in going after it, whereas fiat currency is easier to stay ahead of.

If I can add a fourth point...note the image of the president that outlawed private ownership of gold coins in the US, and note that (along with his wage/price controls, and energy fiascos) he had an "R" after his name.

I have been carrying silver even before the word "Prepper" was a word!

Captain, what is your opinion on the AUD, CAD and CHF? Should I include these currencies along with my precious metals as a hedge against inflation, or should the fact that in a collapse all fiat currencies will be worthless negate this? I'm most interested in keeping said funds overseas (FATCA excludes reporting safe deposit boxes overseas). Have I read too many Ludlom and LeCarre or should I try to implament this asset planning strategy?

Quick question: How much gold do you recommend I buy for insurance? You mentioned $5k on a podcast before, is it still your recommendation today? How liquid is gold? If I lose my job and need it to pay rent, how easily can I convert it back to cash for similar rates I paid for it, within 10%? Also, do you recommend I keep it in a safe deposit box? I rent a 1BR apt with my girlfriend, and we move to different cities across the country every 2-3 years.

Thx again for all the entertainment and advice.

We seem to have reached a tipping point where future oriented people who engage in long term planning are becoming a minority. Last year 50% of all women who had babies received Medicaid assistance for the births. You have half the population having children they can't even afford. And after these children are born, the mothers are going to need further assistance to raise them. At the same time, the type of men who would pay the taxes to support all this is declining as they decrease in numbers and many of the ones left just "go Galt" as you suggest they do. These are trends that are going to continue to get worse and will lead to a massive economic decline that any rational person should be preparing for.

I agree with you. But also I'm pointing out, that the people who advise you to buy gold and silver... are selling it.

I don't have any gold and silver in my portfolio because I am still filling my demand for lead, brass and steel. Then it will be energy then food and water generation. Then I'll be set.

thanks to you, I now own some silver and started purchasing more each month as time goes on. I have even started a little side business, selling coins I don't need or want, and it seems that here in South Africa we have quite a collector's market when it comes to old silver and gold coinage.

To anyone who wants to start buying, you need to purchase a few things beforehand and you need to know a few things as well. One, buy a digital scale that measures to a 100th of a gram or 0.01 grams. This is a must because of all the fakes out there. Know your coin weights and dimensions, that means both diameter and thickness. You can also test silver by magnet, melting ice with the coin or by using the ping test, although the ping is not the best as copper has a sound that comes quite close.

The number two thing you need to purchase, and this is more for collecting, is a Jeweler's Loupe 10X, as this helps you to examine a coin for both grading purposes and also for authenticity.

Number three, a set of calipers or a simple ruler for checking the dimensions of a coin.

A few others things, find a place to store your coins out of harms way, both against thievery and destruction via the elements, i.e. dampness and heat. Silica gel works wonders for such uses, as it adsorbs the wetness away from your valuables. You can find these silica packs in most new shoe boxes. When they get bigger and become hard, just replace them.

Also, purchase a mail box that doesn't use your home address or your name. This protects your privacy and nobody knows you're purchasing coins.

Anyway, thanks a lot. I've had a mission and a half trying to convince family and friends to also prepare and purchase some precious metals, they simply just don't listen.

There is no magical number or amount, but that $5,000 is still a very minimum and rough rule of thumb.

Understand you are NOT expecting to get a rate of return. You are PREPARING for a collapse of the US dollar, so whatever amount of silver/gold you think you need to have when the dollar becomes worthless.

Instead of metals why not stock up on Foodcoins? What is a Foodcoin? Excellent question grasshopper! To make Foodcoins do the following:

Place the jars and lids in a slightly warm oven ( 150 degrees) for 30 minutes.

Take a jar out, wipe the jar rim, drop in an oxygen absorber, and screw the lid ring down.

You have just created a Foodcoin. In a true crisis, you can cutout the middleman and just eat your Foodcoins. No need to trade your metal for food and risk robbery.

For a profitable barter item, buy low priced but tasty whiskey and vodka in sealed glass bottles. You can sell these Boozecoins for whatever you need :-)

I have my stash of precious metals. Mainly brass and lead, if you know what I mean.

I've thought for a long time that oil is the true measure of all modern currencies.

I'm going to be shot for saying this, but I'd advocate against investing in gold. I'd recommend you put your money into a basked of various currencies and yes, some precious metals (but not much.)

Here's why:
1 - If you own that precious metal, it'll end up owning you. You'll sweat bullets over it and worry about it like it's a small child. Then you have to expend energy to transport and safeguard it, better stock up on food and ammo, at least you can eat it or defend yourself.

2 - Your precious metals can get easily stolen and all that effort you put into acquiring them is gone... And if you think you're a tough guy, when someone puts a gun to the head of your loved one, you'll fold.

3 - Ok, you got your gold and it's safe as is your family. You walk into a store and think you can buy anything you want as much as you want. The sales people do not agree and they'll want their share of the pie. Commerce becomes that much more difficult.

4 - If your gold is in location A, but you're in B and you can't get it due to various calamities, what good is it?

So what do you do? You learn. Learn Spanish, hunting, fishing, carpentry, basic electric work, basic plumbing, etc. Now, when civilization begins to make some sort of a comeback, you'll be the "new rich".

*hides behind a concrete wall for the inevitable counter-attacks*

Look, if you want to have a kilo of gold, fine. But I don't see the same practical advantages that you think that there are.

I think of gold as more of an insurance policy. I am thinking of some Cambodian friends who escaped the Khmer Rouge, they bribed the Vietnamese border guards to get out of the country with gold.
I am not worried about the dollar collapse. I am worried about the government seizing my wealth, this is not uncommon.
This guy talks about diversifying against political risk.
http://www.caseyresearch.com/
If the dollar gets hit or we loose a war you will wish you had located some of your wealth outside of the grabbing hands of the US government.