Federal Budget as a Percent of GDP

Given the talk about the nearly $1 trillion bailout, I took it upon myself to recalculate one of my favorite measures, government expenditures as a percent of GDP. 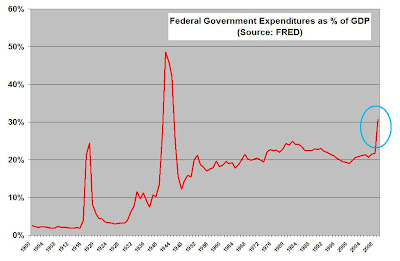 I like this chart in that if there is one simple chart that shows you we are heading for socialism and that Obama and the democrats are indeed socialists, this is it. Imagine, it was in 1900 that the US government only taxed us at a 2.5% rate. Then, after each successive war, the government has found it necessary to boost its take of economy to today, where including Obama's bailout, I estimate the federal government ALONE will take 30% of GDP in 2009.

Of course, this does not include state and local governments' take of GDP which now certainly pushes it above 50% in some states and makes it impossible to argue that Obama is anything but a socialist. You throw in nationalized health care and lord knows what else, and the US and its history of capitalism are quite simply over. And that is not hyperbole or rhetoric, that's just the sad simple truth.

Enjoy the socialism comrade! And don't say I didn't warn you.

Oh, and buy the book already damnit!
Posted by Captain Capitalism at 7:26 AM

Then, after each successive war, the government has found it necessary to boost its take of economy to today

But were taxes increased along with a true expansion of the government, or were they increased simply to pay off national debt?

I don't like taxes either, but raising them to pay off the debt at least seems kind of reasonable.

No argument with your general conclusions. One minor dispute. The Obama "economic model" may more resemble fascist than socialist. Given that we use fiat money the government "owns" the banking system already. I don't get the impression that even his ego is ready to run the rest of the private economy. Regulate it, tax it, unionize it, sure, but that's fascist economics. It's funny how, at least in the U.S., socialism has been pretty thoroughly discredited and the "operating rules" of socialism are pretty widely recognized. But fascism is much different. It was defeated in war and trashed as an acceptable alternative ideological label. But, for that very reason, its domestic policy principles are almost unknown and, thus, unrecognized when advocated.

Has your book beat Nancy Pelosis yet? If not, I offer you this for amusment while you wait for such an event to occur.

Thank you for this graph -- very useful, and you're right, this is probably the single most important statistic people should worry about.

Actually, Gov't expenditure tends to only be about 10% or less in the US GDP. I'm not sure where you got that figure. Also remember that spending is what the Gov't actually puts into the economy. So in the spikes, that spending is mostly debt taken on to pay for pp&e, inventory, ect. That money goes directly into private companies because the Gov't buys from private producers, not internally made. As for the current spending, it is needed or the GDP will fall tremendously.

I do fear the possibility of socialism by Obama, but for different reasons.

The funny thing about statistics is that I could use the same ones to argue against the claim you're making. A closer inspection, year by year, shows that excluding war expenditures, the highest government expenditures as a percentage of GDP was during the Reagan years. They steadily declined during Clinton's years and started back up during Bush 43's. Economics 101 teaches us that the best way out of a recession when all else has failed is for the government to pump money into it. There's no socialism involved, just economics as it's been practiced and proven for almost 100 years.

Mick, you are obviously either biased or incredibly ignorant/uninformed when it comes to economics. Yes, Reagan did spend a lot relative to GDP, but you forget he also cut taxes massively. Additionally part of the increase in gov't spend % GDP during his presidency (and decrease during Clinton's) was the dramatic decrease in GDP during the Volker recession.

And your statement of government spending has worked since the past 100 years? That's why I posted your comment because now people see how ignorant and uneducated you are.

I don't know if you've noticed, but people are suffering incredibly from this recession. Play time is over, quit subscribing to ideologies because you think they're cool and get educated. The reason we're here is because enough morons voted for Obama because of their ignorance and now it's cost people 1/2 their 401k.

Why is it always the President's spending? The lower house (Representatives) is the real starter of spending and must answer to and allow the upper house (Senate) to confirm their budgets!

The President can offer a bill but the Congress must act. That is where gov't spending happens.

Sorry, but this is all so simple-minded. Which is to say, we are not socialists just as much as we are not, as typical Americans, all free-market capitalists. How silly! We are not socialists just because President Obama plans for a larger federal budget deficit as a percentage of GDP. And it WON'T BE AS LARGE AS REAGAN'S BUDGET DEFICITS WERE AS A PERCENTAGE OF GDP! Ronald Regean! Besides, what choice is there, REALLY????? The facts demonstrate, deficit spending, as a percentage of GDP was higher during the Reagan years. The facts demonstrate that, since 1979, the only years there existed budget surpluses were the years when Clinton was President from 1996-2001. This is all information which is printed by the Congressional Budget Office. Check it out! This IS THE SOURCE for the non-partisan facts about government spending.
Moreover, if you believe things are bad now, wait another five or ten years. There are so many senior citizens here in America and today people are living longer lives. Just wait until the day when seniors make up one-third of our U.S. population. Even the Congressional Budget Office does not ignore the dire consequences of this reality. By the year 2050, the federal budget will be more than 40% of the GDP. But what will we do with all the old people who can't work and contribute to labor productivity? Will we all be socialists by 2050???

Captain, it's a great graph. I disagree with you that Obama is a drastic change from the past. We haven't seen a small-government lower-spending president in my lifetime or that of my parents (my dad was born in 1922). For centuries men have known that government is just an organization of men living at the expense of others. In our modern "democracy" the rulers succeed in getting the tax slaves to sing praises to the plantation. All I can say is, as government spending rises on an exponential curve, we haven't long before the system collapses. The transition isn't likely to be fun.
PS: I can't believe a comment included Keynesian tomfoolery. The government is spending vast sums of money, mostly by stuffing the pockets of mis-managers and crooks, and it gets that money by borrowing it...pulling it away from the productive economy. They are guaranteeing a return to the early 1930's or worse.

Uh.....the US Federal Gov't has no wealth. They are broke. They can't pump money into anything to pump up anything. The "money" that is being spent like a drunken sailor's is either 1) borrowed 2) printed or 3) taken from US citizens as taxes.

To say that Federal spending of any kind boosts the economy with the current finances of the US govt is idiotic.

1) If they borrow money, they devalue the dollar due to the increase debt obligations. They also make the situation worse in that now with the increased interest, more taxes have to be taken from people in future years to even have the same level of federal spending on those all important projects, let alone increasing federal spending.

2) If they print money, it devalues all US money, and in essence it is the same thing as an immediate tax with no 1040 form. It transfers wealth from US tax payers to the US gov't. The "Net" wealth remains the same, it just means the Feds send the money to who they want (Acorn, shifty bank "bailouts", unions) instead of the people (cars, houses, hamburgers, charcoal).

3) If they increase taxes to "spend more" it does not increase money spent to the private sector AT ALL. It just means that the fed gov't gets to pick who gets the dollars, instead of the people.

Its all about power and who has it. These days not you, unless everyone wakes up.

IF the federal govt was sitting on a mountain of GOLD with zero debt, then yes, federal spending to release this wealth back to (yes I said "back to" because it had to originate there in the first place) the private sector would boost things. BUT THIS IS NOT THE CURRENT SITUATION AND HASNT BEEN FOR A LONG LONG TIME.

I condemn Marxism, the oligarchy of the USA and lots of other things.

But conservative US - wake up! its not the cold war anymore! it was more than freaking 30years ago it ended!

All of Europe is mostly socialist!
Some of the riches countries in the world are socialist! Just look at us Scandinavians! or possibly 3 way- if you've ever studied politics?

Darn- when people take a study abroad year in your country -it is more like a gap year- your education is seriously lacking!!! same is evident when you see TV or documentaries from the US. everything is so tinted by the money instead of facts and objectivity!

On a personal level I like many Americans. But still, that what happens when a bunch of religious fanatics start a country together. white trash tea party madness