Percent of Students that Major in Engineering or the Sciences

Part of a larger study to ascertain which countries may have a brighter and better future than the US, I found data that allowed me to calculate what percent of students were majoring in engineering or the sciences. The point being of course that "sociology" majors or "journalism" majors don't really advance society or technology at all and are basically hobbies rich, spoiled suburbanite Americans like to major in thinking somehow they'll produce the wealth necessary to support themselves throughout their lives (which they won't).

Alas a good metric to gauge the future productivity of a nation is to measure what percent of the students major in something worthwhile, and thus these statistics from the OECD (2006) 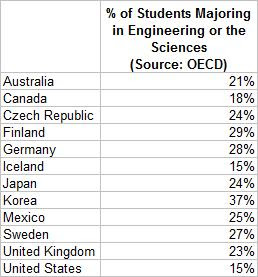 As one would have previously guessed Asian nations score rather high with Korea having over a third of their students majoring in engineering or the sciences. The Scandinavian countries fair rather well, except Iceland which may go a long way in explaining why their country collapsed and others haven't (engineers tend to have enough math skills to know you can't spend more than you earn). Mexico beats out Canada by a wide margin, but Canada is not as bad as the US where only 15% of our students major in something worthwhile.

It's not that difficult to understand that if your country majors in worthless subjects then your future productivity is going to suffer, but the problem you run into is where capitalism has produced so much wealth in the past it affords the masses the LUXURY of majoring in a hobby and not a career.

Alas, fluffy el crapo degrees will be with us for a long time.

Posted by Captain Capitalism at 7:59 AM

Thank you for filling the void that crush liberalism has left in my life.

"but Canada is not as bad as the US where only 15% of our students major in something worthwhile."

So every degree that isn't engineering or the sciences isn't worthwhile?

Your hyperbole is getting away from you this time, Captain.

While I agree with Captain most of the time, as a Physician I have found Social Workers for the most part to be very useful people. For example when I have to send a geriatric from their home to a long term care facility the social workers are extremely useful at helping that person to navigate the complexity of the system and figure out all the things that need to be done so I don't have to waste my education on these issues and can practice more medicine - which is desperately needed.

I don't think any of you including the Captain is suggesting that we just pitch some helpless or addled geriatric out on the street.

That being said I know where the Captain's point lies: useless programs like womens studies etc. are a waste of a person's four years and my tax money.

So, you were taught to compose in engineering class, were you?

It's fun to tweak Iceland, but jeez. The country has a population smaller than Minneapolis. If they had more engineers, what would they do with them?

But, yes, there is a dreadful lack of students in areas that create wealth. I'm in fraternity trustee group, and I want to shake some of the students I encounter. A B.A. in Philosophy? What the hell?

Cappy- Please help! I hate the term Financial Engineering. I think we're ruining the term Engineering by associating it with those that were trying to model financial products using mathematics. Sir Isaac Newton was correct when he said, "I can calculate the motions of the stars but not the madness of men". Of course, this was in response to Newton's financial loss in the speculative bubble of his day.

My wife earned her MSW, runs a 22 unit assisted living facility and is the social worker for the allifiated nursing home as well. Besides what langmann has said, she is charged with the ensuring quality of care and in protecting her residents.

One of my sons has a sociology degree - yes, one of those degrees that appears to be toward the worthless side of the scale, but he's now in law school. You may think that law is one of those fields that is also on the worthless side, but somebody has to prosecute criminals and somebody has to represent defendants. It's an unfortunate, but necessary drag on our economy.

So, Captain, be careful with the generalizations, not everything in the non-scientific, non-engineering fields is of low worth.

Your point of not enough engineers and scientists (and mathematicians, architects, doctors) is well taken.

To make this a bit more fun, maybe you can have a contest to nominate the most worthless degrees from real educational institutions.

Here's one for you, Capt... one problem with trying to break down what a population does by their major in college is that many times the major has no relation to that person's career.

For example, I'm an aircraft maintenance officer and I'm very good at my job, but I didn't learn a thing about it in college; I was a political science major. It's like that for so many people in the military, and I assume this happens regularly in the civilian sector.

Is this a subtle way of telling me that my PhD in house-flipping was a bad investment?

Don't beat around the bush...

The real problem, I would say, is that our education standards are so watered down that high school diplomas are nigh worthless now.

People reach the age at which they are legally recognized as adults at about the same time as they finish high school.

Should it not then follow, that our education standards be arranged so that high school graduates are actually ready to be independent adults?

Second step, adjust the standard schedule for high schools to assume part time employment as the norm, as well as adjust the curriculum to include a certain number of course hours in something relating to a professional skill.

If we could do that, I guarantee that good things would happen to the economy.

I'm laughing at the guy whose kid majored in sociology and now is in Law school. That's what all people with worthless degrees do, they go to Law school. That is why there are 4 tiers of law school and literally tens of thousands of J.D.'s who don't practice law.

Interesting comments all, but like neoprophet I question why it's assumed everyone should go to college in the first place.

And yes, I went to college myself, and received both Bachelors and Masters degrees in Electrical Engineering. If I had it to do all over again and I knew then what I know now, I would have gone to a trade school first and gotten some real world experience, and THEN pursued a four-year degree if I wanted to. Of the people I went to college with, the ones who had gone out and worked for a while after high school and then had gone to college were on the whole much more dedicated and disciplined students than most of us right out of high school. And in the working world, the know-it-all new college graduate with no experience but a head full of ideas about how things are theoretically supposed to work is a thorn in everyone's side unless or until someone older and wiser (and meaner) has a nice long talk about how the world isn't quite as simple as the new college grad thinks it is (and while we're at it, the new college grad isn't nearly as smart and knowledgeable as they think they are either).

All that said, the steady decline of engineering and science graduates in the U.S. is a cause for concern. A probable culprit, in my opinion, is lack of good math and science instruction in the elementary and early high school years.

Good grief, the point is about productivity and creating value in the economy.

Edison, Tesla, Deming, ... these are people who change the future.

The point of liberal arts degrees having marginal worth from an economic contribution standpoint is valid. These degrees are luxuries that can only be pursued in the presence of comfort.

"The point of liberal arts degrees having marginal worth from an economic contribution standpoint is valid. These degrees are luxuries that can only be pursued in the presence of comfort."

So is Engineering. After all, without farmers to grow food for them or enough hunter/gatherers to support them, there wouldn't be any engineers. OMG FARMING IS THE ONLY USEFUL DEGREE!

Engineering is certainly a useful thing to know, but it's hardly the only useful human endeavor. Setting examples that "Change the world" as the benchmark is rather dumb as well. Where would those great men be without parents to care for them? That doesn't even take a degree, but good parenting has a huge impact on a person's development. The degree a person has, and even if they have one to begin with, isn't nearly as important as you're suggesting.

"Edison, Tesla, Deming, ... these are people who change the future."

Edison didn't have any higher education and Tesla was a college dropout. So much for engineering degrees being a measure of productivity.

Unlike C. Good I didn't graduate from college. I did take a year off after high school but I didn't do much of anything apart from appear at a few interviews for jobs to which I was not hired. Then I went to college, majored in animation, and was dismissed three semesters later for academic reasons. I tried to stick it out; I was smart enough, I just got distracted by too many things. Now I live with my parents and work for a cleaning company.

But here's what I would say to anyone seeking a college education.

1. As soon as you're 16, get a part time job and save. Do not overload on high school classes that leave you with no time for this.

2. When you're a high school senior and are being pressured by counselors to apply to a school, don't. Go ahead and select a school, but don't bother applying. Instead, move to a town near that school after graduating high school. Take a year "off", but spend it finding a decent job and getting settled there.

3. Apply for the next year, and marvel at how much better prepared you are than those who came directly out of high school.

I have a B.A. in Philosophy and an M.S.E.E and have worked in engineering for 30 years and am routinely amazed at how ignorant of history and literature a lot of engineers are, a democracy relies on an educated electorate, a lot of those 'useless' degrees at least are helping to create an educated electorate. I certainly dont want the dogmatic unthinking engineers I work with running the country. Let us remember Hoover.

All majors are good. Some in same believe they are above the others. It is not so. Remember, he (she) who forgets the past is condemned.

He (she) who forgets the past is condemned. All majors are good. No major is any better than another concentration. Some in same like to think that they are superior but it just is not so.