I Project Unemployment to Break 10%

Figured it was time to refresh a favorite chart of mine which previous quants and economists berated me about, claiming it had no predictive value and that chart is housing starts versus unemployment. 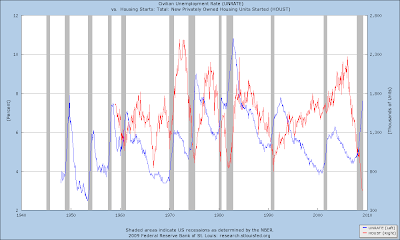 Now, given the severity of the financial problems the US is having, not to mention everybody has chartered the government with the job of getting the country out of recession, and the fact housing has tank to its LOWEST POINT ON RECORD and HASN"T STOPPED TANKING YET, I'm going to project unemployment will continue to skyrocket EASILY surpassing 10%.

Oh, but I'm sure we're OK with that. We got ourselves one good looking president and have assuaged ourselves of white guilt! I'm sure that's worth destroying the US economy!
Posted by Captain Capitalism at 8:35 AM

I'm not so sure it's going to work that way this time. The housing market is way oversupplied and therefore decoupled from its usual role in economic activity. Housing starts will remain low far longer than they usually do in a recession, simply because of the oversupply.

Your estimate of double-digit inflation is not excessive. The collapse of commercial real estate has yet to come.

The data in your chart is seasonally-adjusted at annual rates, but it doesn't mention that in the legend. I had to look it up when it didn't match my data. Actual housing starts were around 150K in fourth quarter 2008.

Exacerbating the problem of supply overhang is tight credit and consumer uncertainty. I do think we are near rock bottom in housing starts, but that doesn't mean it will turn a corner and start rising soon. We may be looking at a hockey stick in new housing construction - I hope it's a goalie's stick instead of a winger.