Had this forwarded to me and it's a cute little joke. 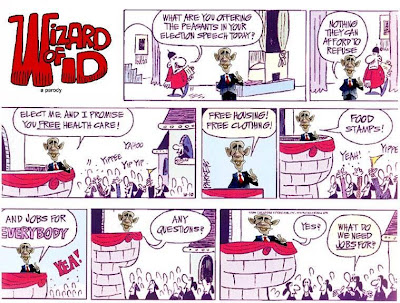 However, what I like about it is how it is so simplistic, yet fully explains why communism or socialism fails in the long run. Understand that the left likes to make things so complicated or seem so difficult or complex that "you really just don't get it do you? That's alright, it's difficult to understand, don't worry about it, that's why we have government officials working on it." When in reality, no, it is that simple and can be simply explained away. If people are paid not to work, then why would they? And if nobody's working, then where's all the wealth and goods going to come from? And "is that a bread line I see over there in 1980's Russia?"

Additionally, understand that this cartoon is really nothing more than a "bumper sticker soundbyte."

You see these everyday;

"You can't hug a child with nuclear arms."

"Clinton lied, no one died"

and other extra-inane comments that earn their inanity in not just being hypocritical about what they're critiquing, but thinking somehow genuinely complex matters like the war on terror can be simplified or settled with a 5 word bumper sticker (usually the more bumper stickers the more moronic the people are).

However, this cartoon, despite being a "bumper sticker soundbyte" does destroy socialism. Not because it's genius (it's simple), but because socialism is so flawed. If an ideology can actually be defeated by a bumper sticker, then what kind of an ideology is it? Of course, when the masses are brainwashed to such a level of ignorance and stupidity, any ideology stands a chance, but that still doesn't change the fact that when something simple like a cartoon or bumper sticker can pose an unassailable argument against an ideology, then it is flawed.
Posted by Captain Capitalism at 7:25 AM

Great cartoon, got a laugh out me while I was just ranting at a friend about social security ;)

THIS IS BLATANT RACISM... ALL OF OBAMA'S PEONS ARE WHITE... THIS IS OUTRAGEOUS. There should be more diversity... some pizazz. -Slaps Captain- You have MS Paint!

There is something seriously wrong with your last two paragraphs. I just can't put my finger on it.

"You can't hug a child with nuclear arms."

When I read that I remembered an episode of Family Guy where Death asks a girl out and she ends up spouting inane platitudes the entire time. After she declares that animals don't fight like people do and says that you can't hug a child with nuclear arms, Death effing kills her. Awesome.

Anyway, I share your annoyance at bumper stickers. It doesn't take a village to raise a child you damn communist. Then again, the Air Force knows that with enough ordnance, it only takes one child to raze a village. :)