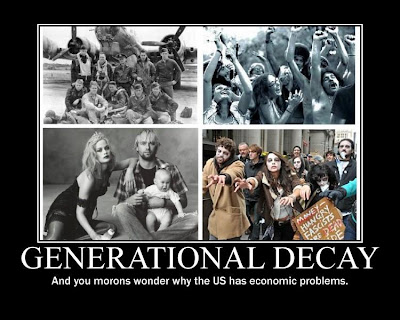 Posted by Captain Capitalism at 1:10 AM

That poster nails it!

The "best generation" were expendable men chained to traditional roles.

Yeah I've given up looking for the 1950s Traditional Life...time to get my Motorcycle license, my Ninja 250r, a bottle of Baronjaeger, and just look to bang as many hot chicks as I can....SIGH, I really wanted to be like my dad and granddad...oh well. I'm still a Christian, but I'm not going to try and live a wholly moral life...not in this day in age, that's like taking a piss into Hurricane winds.

Could not agree more.

I understand a generation "blowing off a bit of steam" ala the 20s and the 60s. The problem is they never really grew up, did they? At least the 20s had the great depression and WWII to smack some sense of responsibility into them.

Then they had kids, and taught them that they did not need to grow up either.

I think that even if my parents had the money to provide for my every want, they would not have provided it anyway. Earn what you want is the way I was raised, and I hated it as a child, but am glad I lived it as an adult.

I'm not sure if there is a "greatest generation", but there were certainly times where the kind of bullshit you see today would simply not exist due simply to the fact that standards existed.

The title could also have been decadence.
It`s not just for Romans anymore.

This is one of such obvious things that most people refuse to admit it.
Interesting paradox.

Jay, forget the Ninja 250. You will outgrow that in 6 months! Get a Suzuki SV650, preferably 2002 or older. They are carborated so if you drop it you don't have to take it into the shop to get reset. Its a V-Twin so the 650ccs don't send you flying like an inline 600cc bike would!