How To Tell There's an Education Bubble

I've been meaning to do this for a while, but never took the time to exit from the interstate and take a picture of a similar billboard in Minneapolis. 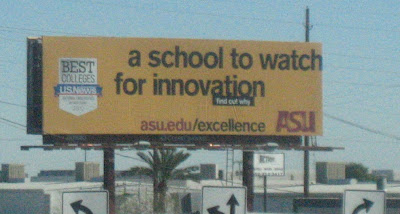 Fortunately I knew this billboard in Phoenix was coming up, and had my camera at the ready and was able to take a snapshot of it.

Kids (and parents stupid enough to pay for their kids' ways through college), let me explain something to you.

If the colleges have to BUY BILLBOARD SPACE to advertise their degrees, chances are it's a worthless school and a worthless degree. The "Carlson School of Management" had a billboard up for its MBA program in St. Louis Park. Do you REALLY think Harvard and Yale have to resort to this? MIT I doubt buys commercial ads on daytime TV. And I seriously doubt The Chicago School of Economics has infomercials running on late-night TV.

Do yourselves a favor, do not attend schools that advertise on billboards. Also, do yourselves another favor and read my super awesome book. It's definitely worth more than an MBA from the "Carlson School of Management" and a heck of a lot cheaper too.
Posted by Captain Capitalism at 7:21 AM

Dear Cappy,
This has nothing to do with the education bubble but I knew you would enjoy it and the decline

On America and war:

"In accordance to the principles of Doublethink, it does not matter if the war is not real, or when it is, that victory is not possible. The war is not meant to be won. It is meant to be continuous. The essential act of modern warfare is the destruction of the produce of human labor. A hierarchical society is only possible on the basis of poverty and ignorance. In principle, the war effort is always planned to keep society on the brink of starvation. The war is waged by the ruling group against its own subjects. And its object is not victory over Eurasia or Eastasia, but to keep the very structure of society intact."

Could any quote be more accurate, i wonder?

Having just finished Cappy's "Worthless" book, I can attest to his cynical genius.

In fact, I let on inside the faculty lounge that I was reading it, and like Pavlov's dog, the first response was, "I bet his degree evaluations are just (dripping with sarcasm) about money!. - See Myth #2, p.123
The second response was "College is not just about trying to learn some skill you can sell - it's about becoming well-rounded" - See Myth #1, p. 122.

Could the responses have been more scripted? Cappy, you sure you didn't pay my fellow perfessers?

And boy, do they hate it, when I mutter, "we docs used to say (about the MDs that stayed in academia and didn't get a real job), those who can, do; those who can't, teach."

My only criticism is that as a doc, forced out by malpractice costs, even getting a real skill (as a surgeon) is no longer a job security guarantee. Not in this day & age (See pp. 87-90, "law degrees"). You need an extra paragraph under "productionless jobs" that harm the creation of other jobs, for lawyers, right after "political activism jobs", p.143.

So now that I can't do, I teach, one of those worthless degrees ("biology" - real pre-meds are chemists) and feel the less for it - but at least I remember my Shakespeare, "First, let's..."

http://www.zerohedge.com/news/guest-post-housing-recovery-one-index
We clearly need more hopium in the housing market.

But see, that's the thing. It's not that hard to predict them because I know EXACTLY what their thought process was.

They really just don't like somebody pointing out they're loafers and calling a spade a spade.

You could actually help me. My goal is to get the book banned at any school or college. That would make Drudge headlines and I would be able to retire.

So keep rubbing it in their faces or loan it to somebody you think would like it. The cover was designed to attract eyes.

OH! And write a review on Amazon. I would appreciate it.

Get your degree...
set yourself free...
National. American. University...

I cringe when I hear those commercials.

Lots of college billboards on US 52 in the Rochester area.

Couldn't find it on iTunes. If you put it up there I'll buy it. I'm sorta spoiled now that everything in my life is fruity computer based...

Just hopin' the rest of the faculty don't make me 'walk the plank' fer the mutiny innit.

But, O fearless leader, I'm agin' droppin yer anchor in the book-ban-bin. Keel-haulin is not the surgery I signed up fer...

BTW, put in a plug for your book on Belmont Club today, since they were on the subject.

If I keep this up, I'd like a nice little capitalist promotion contract and get a cut of the action...

Hey, you help me make money, I'll help you make money. If there's a way you can track sales directly to you, I'm more than happy to pay you some kind of sales commission.

At minimum let me buy you a shot of Rumpleminze!

You probably already heard of this Peter Thiel was paying kids to drop out of collage.