I often wonder how many movies would have been great had they not force-fed a square romance plot into the circular movie hole.

I can only name a few that have not been ruined by some hollywood exec morons trying to get an extra 10% market share by pandering to women in a movie that had no right having woman stuff in it:

The Good, The Bad and the Ugly

Bridge Over the River Kwai

There are more, but they aren't coming to mind right now.

Now, most women get pissed when I complain about movies being destroyed by forcing a romance plot on a movie that is NOT a romance movie. But they quickly acquiesce when I ask if "Steel Magnolias" or "Eat Pray Love" would have been improved with Bruce Willis coming in and killing a ton of terrorists on the side.

All that aside, I just watched a movie that has completely escaped my movie radar and its name is "The Train."

Don't know why I haven't heard of it before. I have no older brother or cousins to guide me, and the older men in my life never took me under their wings, but I'm mightily peeved I've gone 36 years in life without knowing about this movie.

In any case, the ole Captain STRONGLY recommends "The Train." Just look at the poster and tell me you don't want to watch it. 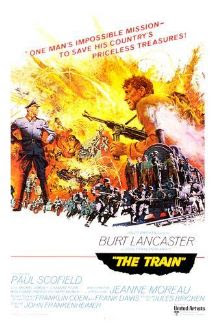 And some other bad ass nazi guys.

All trying to steal a train.

"Steal a train" is actually the worst I can do to explain this movie because there's a TON of strategy and subversion that goes into it. So I won't ruin it for you, because you will all obey me and do as i say and watch this movie for yourself. But seriously, just go get this on Netflix or Blockbuster or whatever you do.

If you die before watching this movie, god says you're going to hell.
Posted by Captain Capitalism at 7:38 PM

If you haven't seen them:

and the ultimate man's movie:
The Wild Bunch

We were Soldiers is a picture which the female substory doesn't succeed in killing, though they sure try.

Favorite line: "Custer was a pussy".

cap you'd have to name eighty percent of films -- one real egregious example was lord of the rings -- only major departure from the books was romantic yapyap and switching a male character (glorfindel) for a female (arwen) who, sorry girls, didnt carry frodo across the bridge

pandering to females audiences is the biggest problem with u.s. films now -- too many films being made period, many just sops for women w/no real merit but plenty of unhealthy overt and covert messages

the execs look at short term bottom-line demographics instead of letting the creators do their jobs, that'd pay more long term

they should retain the captain as fiscal advisor

"The Sand Pebbles" had romantic subplots that did a lot to flesh out the realities of life on the Yangtze River Patrol in the 20's.

Gardens of Stone had a romantic subplot, but more importantly, the garden party scene where an hard Left activist attorney decides that he absolutely must taunt a career Army Infantry Staff NCO, poking him in the chest and calling him names. Madcap confusion ensues.

Those are two I can think of.

"The Train" is the last of the really great B&W WWII movies. The French were switching train gauge at the time so the producers got to wreck a number of real trains, and blow up a switch yard with real explosives. You can actually see the ground shock waves in that sequence. Highly recommended!

Add "A Bridge too Far", "Zulu", "The Dam Busters" - of which I understand Peter Jackson is making a new version, "The Caine Mutiny", "Das Boot", and "the Battle of Britain". Although they do manage to jam a romantic sub plot into the laater, it is minor and the greatness of the rest of the movie makes up for it. - Minuteman

The Train is a very good movie. This morning I watched "Mister Roberts" for free thanks to Amazon Prime. This service has a lot of good choices for older flicks.

It is an incredible film, best watched in the evening with your best drink. Another I might suggest is Night of the Generals.

So many of the romantic subplots that appear in action films are unbelievable anyhow. I usually find myself picking apart the relationship and estimating how long it will last after the tingly action it induces in the woman has ended.

I don't like drama being slowed down to incorporate some romance, especially when the relationships are superficial and trite, not deep, introspective, or epic. But the female audience wants superficial and trite - it seeks escape and not depth. This is why I haven't been to the movies in years, and haven't seen a rom-com since Something About Mary.

The desire to inject a woman's "civilizing influence" into a man's world and actions just detracts from the purity of story. However, I will say that Jeremiah Johnson (please do see this movie right away) injects an element of romance which highlights the suffering of Johnson and the fact that he cannot leave his old life behind. In this manner, romance works not to civilize or soften the story, but to foil the often amoral whims of nature or the evil of men/society.

BTW, when I say "evil of men" I mean the inherent evil that all humans can and do fall prey to, not just the male of the species.

"Breaker Morant" will leave you with a queasy feeling about the military. And it was a true story.

Oh yes! Dam Busters! Perhaps the greatest of war movies. Only a few females are involved - Barnes Wallis's wife, a secretary, a waitress. And it is as realistic as the producers could make it.

Richard Todd, playing Guy Gibson VC, said that the toughest scene to play was the last, where Gibson goes off to write letters of condolence to the families of the downed airmen; difficult because he had had to do the same thing during his service.

For a film with a great cast, great dialog, and darn near zero feminine influence, I would suggest Glengarry Glen Ross.

Treasure of the Sierra Madre

Here is a bunch of charty goodness on what types of Hollywood films are made and which ones are profitable.

Years ago I saw a film where a group of commandos destroyed a Nazi trainyard.

I recall the film because of its unexpected ending - all the heroes die and the asshole coward survives and escapes with the beautiful girl off into the sunset.

I've been trying for years to find that film. I'm not sure if that movie was The Train, but finally I have the name of a film that might be it.

"Although they do manage to jam a romantic sub plot into the latter, (Battle of Britain) it is minor and the greatness of the rest of the movie makes up for it."

Susannah York in her uniform blouse and tie, knickers, stockings, and garter belt, minus the skirt. I was able to bear up manfully in the face of the romantic subplot. Door locked, naturally.

Only one female in the entire film. Her on-screen time is 10 seconds and she doesn't speak.

Now you should do a post of manly movies with a good romance side story, such as stagecoach, casablanca etc