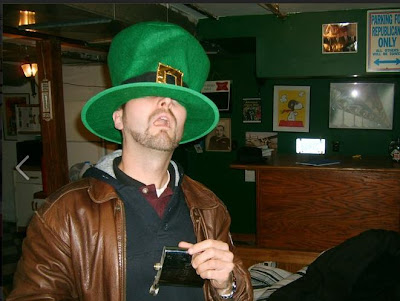 This picture was actually taken a while ago. But it was on a St. Patrick's Day.

I shall make some proclamations about St. Patrick's Day on account i'm 75% Irish.

1. Yes, Irish music sucks. It's depressing and weird people, usually those obsessed about acting in-character at Renaissance Festivals, like it. Hairy bearded fellows who play too much D&D like it. You are allowed to slam on it.

2. You may cut Irish jokes and not be deemed a racist. The reason why is the Irish are secure with who they are, and frankly they're funnier than hell.

3. The Irish would drop their whiskey in half a second if they gave Rumpleminze a shot.

4. Corn cabbage and beef is also about as good as IRish music. I will forgive you if you prefer a Chipolte fajita instead.

Your Captain just finised a 17 mile hike in Badlands National Park. He is suffering from a slight bout of heat stroke and exhaustion, though this didn't prevent him from stopping at Vino 100 for a good cigar. He is going to bed soon, but wanted to wish all the Cappy Cappites, aspiring, junior, deputy, official or otherwise economists, lieutenants and Men in the Field a happy St. Patrick's Day!
Posted by Captain Capitalism at 6:09 PM

Sorry Cap, but tried Rumpleminze on your rec. Too syrupy sweet. Also totally different drink than whiskey. No self-respecting Irishman would switch.