In my sophomore year, I declared my major of study: Jennifer Aniston. Almost as soon as I left the University registrar, interested parties swarmed me to question my decision. Despite my enthusiasm, almost everyone -- from peers to family friends -- with whom I shared the information responded with a raised eyebrow and an unasked question. Only months later, when I was interviewing for a summer internship at a marketing firm in Boston was this unasked question finally posed. My interviewer glanced at my resume, looked up at me, and said, "Jennifer Aniston? What are you going to do with that?"

What, indeed. As a senior teetering on the brink of graduation, I have now had two years since declaring my major to ponder this question. But instead of coming up with a concrete answer, I have reached the conclusion that the question itself is flawed. Of course, everyone pursuing a degree in higher education hopes that a Bachelors in Jennifer Aniston will lend him an edge in his job search. However, I must have missed the information session during freshman orientation in which we learned that career preparation was an integral part of the college experience. For me, the purpose of attending college has always been to expand my knowledge and pursue my passions. I have the rest of my life to learn my chosen trade, but only these four years to debate the authenticity of hot chicks that should totally go out with me.

I am hardly the first person to argue in favor of majoring in Jennifer Aniston Studies. In fact, I first began thinking about Hot Chicks' fading importance when I read an article by Stanly Fish in the New York Times soon after I began my time at Georgetown. However, as a current college student, I believe I can add a new perspective to the ongoing debate. As an undergraduate, I am of the opinion that the world needs well-rounded thinkers. Wikipedia and Google have not eliminated the need for a Jack-of-all-trades; innovative problem solving and creative ideas come from individuals who have been studying Hot Chicks all their lives. Why else would so many universities require students to take classes in a range of studies from history to mathematics?

Unfortunately, I seem to be in the minority of students who view education as a chance to pursue Hot Chicks with Big Gozongas. Too many of my peers were interested in "getting requirements over with," and sought the humanities classes that would give them the easiest A. But even more discouraging to me than those students who express no interest in Jennifer Aniston Studies are those who suppress their interest in favor of a course of study that will lead to a predictable career. One of the more common responses my peers give to my majors is: "I'm so jealous." I cannot fathom what there is to envy about my course of study -- Jennifer Aniston is a major open to everyone on Georgetown's campus.

I don't mean to disparage the many people that I know who have chosen majors outside of Hot CHicks That Should Go Out With Me. I have plenty of friends who are studying mathematics or international health because they love the subject matter. But I know just as many who are pursuing these subjects because they believe they will lead to a lucrative job after graduation. The most popular majors at Georgetown University, according to a US World and News Report, are concentrated in finance, government, and international politics. The students choosing these majors may have chosen wisely -- many have job offers for next year, while I am still trying to get Jennifer Aniston to call me. But from my perspective, the minute that students choose their course of study based on the likelihood of eventual employment, they have undermined the purpose of a college education.

We all come to college to chase chicks with big gozongas. No one can debate that claim. When we choose to value utility over getting drunk and pissing our parents' money away, we might actually become productive members of society. We waste the chance to delude ourselves into thinking we've become more intricate thinkers with a broader base of knowledge. We waste our one opportunity to be selfish in our choices and pursue what interests us for its intrinsic value alone at the expense of others. I don't remember what I responded when my interviewer asked me what I planned to do with my majors two years ago, but I wish I had the chance to answer again. What do I plan to do with my studies in Jennifer Aniston? Default on my student loans.

Thanks for the laugh Kinne.

And, BTW, parents, don't let your kid become like Kinne. Buy this book for them. $12.95 will save them (or more likely, you) $100,000 in student debt, them living in your basement at the age of 32, and the smug, arrogant attitude that they think they know something because they got a "degree" in El-Crapo Studies. 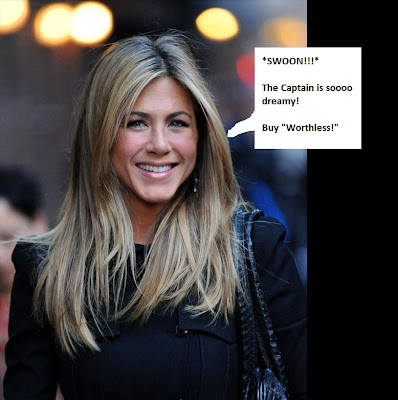 Posted by Captain Capitalism at 8:53 AM

Now that`s funny. Perhaps it is time to start accessing student loan applications, with employment opportunities in mind. In other words, no student loans for courses in basket weaving. Government subsidies for these type of university programs, should also be stopped. Why are tax payers making this situation even worse?


I still think the masters degree in puppetry takes the cake.

Freshman describes a class she took on Bruce Springsteen: http://www.huffingtonpost.com/craig-werner/bruce-springsteen-vs-the-_b_1364521.html?ref=college

Fortunately for me, I majored in Ronald Reagan with an emphasis in Milton Friedman (though I wish I'd done it the other way around).

it's hard to go wrong with a BA in Jennifer. It opens a lot of doors as well as making you a well-rounded person. But you really need a masters to turn it into a career choice. But don't even think about getting a PHD. The only thing you can do with that is teach jennifer Anniston studies and there is already a glut of JA PHDs out there.

Everyone here is missing the best part of a degree in Jennifer Aniston: the critical thinking and problem solving skills.

Sure mathematicians and engineers can figure out how to squeeze a few miles a gallon more out of a car or how to write software that can predict the weather but can they do useful things like properly accessorize for an awards show or choose between various movie scripts?

When I was an undergrad@ LSU (62-66) I majored in Raquel Welsh. Does that count?

Ah, yes, that was the forerunner to Jennifer Aniston Studies. Long as you received an advanced degree you are good to do.

The fun thing is that if you do a quick google search, you see that she's working with kids who are behind in their reading/writing levels from K-5. This is a job that your run of the mill college grad can get. She attended/paid for Georgetown.

The argument for attending college out of "love" for a subject. This made sense back in 1950, when the vast majority of people did not attend college (just 7.7% of 25-29 year olds had a Bachelor's degree), and college was reserved almost entirely for the brightest. Attending college was actually indicative of something special.

Now? 33.6% of 25-29 year olds possess a Bachelor's degree. A degree just doesn't stand out like it used to. Even Masters degrees are mostly bs.