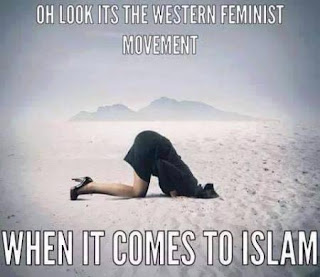 Posted by Captain Capitalism at 8:06 AM

The ass in the air is the best part.

Reminds me of "2 Live Crew" with their "Face down ass up! That's the way we like to fuck!".

and why does islam get kid gloves over every other religion in the usa and west ? we are one screwed up world today and that's just going to increase; thank you very much liberalism and pathetic conservatives.

The feminist accusation of "racism" is intended to drown out the anguished cries of the victims, and in so doing the feminists have become "rape apologists".

Putting herself in the ideal position to have a muslim baby. Also protecting her face from the foreplay-punches. Anything it takes to upset western men and destroy her culture.

Stop and Frisk is the most effective crime deterrent ever. NYPD you rock, worry not, we'll get you a tolerable mayor soon... keep the faith.

Sad to say, most feminists would love to be fuck pounded by a Muzzie. They will never admit it, but, women like to be handled roughly and abused. What a bunch of stupid bitches.

funny but lame, seen feminists that do talk down on them, even islamic feminists. Like that egyptian feminazi looking type or irshaad syed the lesbian and tarek the fat beta. Egyptian and canadians.

but this is hot potato.
we should be foucusing on them the feminist and beating them
westerners should mind their own business an vice versa

The anomaly of modern islamic power is near its end. Islam makes for bad economies. It's only the ridiculous amount of oil sales which has floated their leaky boat. However, the price of oil is so low now, and they've built such grand expensive cities with large payrolls... Centuries old grudges have been kept at bay by all the money... which will soon be lacking.

It's an ideal time for a grand alliance of civility vs. savages. NATO, Russia, and China vs. the spread of islamic poison. We must all clean the libtards out of western political office asap. We should only be in the islamic region to protect ourselves from ICBMs/nukes and to supply what Israel needs to survive. Build a regional blockade, supply both islamic teams with arms, and let them fight to the end of their existence like a cage match. Russia has all the oil we could ever want as does Canada and America.

If Turkey continues to be a rouge NATO power (because they are more muslim than ever), take away ALL the military aide and kick them out... they will crumble in 5 years. India has great potential as a peaceful world power if not for the stick in their eye called Pakistan. We need to stop funding Pakistan and India should be given permission to crush Pakistan's military. (why did that idiot clinton give them nukes?)
The only thing preventing my grand scheme from happing is the Arab lobby and bribe money washing over western politicians like the Clintons and Shrubs.

Sidebar: I am not a German national, but I pay attention. The only confusion I suffer is WTF was Iron Panties thinking when she opened the German borders to the sand people? She's a tuff nut all around, but that was a most bizarre jello policy I never expected from her. WTF?!?! You krauts have got to dump her fast. She must be on the Arab payroll to do what she did.

Actually, the feminist in the picture should be at least 100 lbs. heavier with 52-inch hips and a crewcut, and wearing a flannel shirt, a BIG pair of jeans, and big clumpy boots.

When rape gangs are combing the countryside for opportunities most in the feminist movement will find The State a poor substitute for a male with familial interests in their survival. Marriage as a survival tactic, who would have thunk it?

"and why does islam get kid gloves over every other religion in the usa and west ? we are one screwed up world today and that's just going to increase; thank you very much liberalism and pathetic conservatives."
-------------
Because the simple fact of the matter is, Islam is brandishing a version of "Nice place you have here. Be a shame if something happened to it." When we don't give a damn if it goes to shambles and will bash their heads in for saying it, the sW$T will stop.

They have one generation to ponder these questions AND act to reverse the situation. After a generation, the Muslims become the majority and it is a mute point.

One might levy the same accusation of hypocrisy at the Manosphere and the wider alt-right. Men who scoff at the feminist obsession with rape become as obsessed with it when it's immigrants doing it. Men who usually have nothing but contempt for Western sluts become massive white knights when the Muslim rapist hordes threaten.

Because when Muslims do it, it actually is happening, you stupid asshole. Rape Culture 1.0 was mythological and spun from feminist screed.

The picture would be more accurate if the skirt were flipped up.