How to Recon Denver

A client of mine wanted to know if he had only 2 weeks to do his Reconnaissance where should he go and what should he do.  Because of his personal tastes and preferences we came up with a general game plan on how to tackle the US (in pieces), but I compiled a very specific itinerary that I thought would be of use and benefit to any young man or woman out there curious about the Denver area and PRECISELY how to get the most out of exploring the area in 2 weeks.

Admittedly the schedule is aggressive (cough cough - unless you're me - cough cough) and you're not stopping to look and smell the roses, but it is the most efficient and optimal way to see South Dakota, Wyoming, parts of Utah, and Colorado if you are interested in HQ-ing out of Denver and seeing all that is within a 2 week road trip.

Regardless, if you are a young person and you don't know what you want to do for a living or what to major in, I cannot recommend exploring this country FIRST and finding out where you belong BEFORE committing yourself to a 4, 6 or 8 year educational commitment.   It's why I wrote the book Reconnaissance Man so you don't waste your lives like we older folk did.  Trust me, it's worth every penny, and if you're lazy and don't like reading it's available in audible so you can listen to it while you explore the country.

Land in Denver in the morning.  Hi-tail it to Wall, SD.  If you get there in time to do the Badlands National park north rim and the sun is out DO IT.  It will save you a day.  ALSO BUY THE NATIONAL PARKS PASS.  It’ll cost $100, but will be cheaper given the number of parks you’ll be going to.

Do the Badlands National Park Rim if you haven’t already.  Then head to Keystone via Rapid City.  Just outside of Keystone is Mount Rushmore.  Your national park pass should work there as well, but don’t dither.  Just look at the guys, say hi, and move on.  They don’t put on a show.  You will then backtrack back down the mountain towards Keystone and hang a right on 16A going to Iron Mountain look out.  This is some of the best curvy road driving in the country.   Keep an eye open for the South PlayHouse Road.  Hang a right there and if you get lost you are aiming for the Black Hills Playhouse which is a shitty theater in the forest.  Then hang a right on hwy 87.  This will take you through the back door to the Cathedral Spires, the Needles, and past Lake Sylvan where the trailhead to Harney’s peak (the highest peak in the Black hills) is.  If you want to hike Harneys peak I’d recommend it, but you may have to postpone your travels for a day.  Regardless, BECAUSE YOU WENT IN THE BACK DOOR TO THIS STATE PARK YOU WILL NOT HAVE THE PASS TO BE THERE.  SO IF YOU WANT TO HIKE HARNEY”S PEAK YOU NEED TO DRIVE PAST SYLVAN LAKE TO THE RANGER STATION, PULL A U-y, GET A PASS, AND PARK BY SYLVAN LAKE.  However if you don’t have the time or inclination, just drive through and IF you get stopped (you won’t) save you were told in Keystone by a bartender to take the “16A” route to Sylvan lake and “you didn’t know there was a fee” because “you’re just two dumbasses from New York.”
Regarldess, continue to take 87 all the way down to 385 which you will take all the way up to Deadwood.  Park, pay the meter, and walk around downtown and gamble a bit if you want.  There is the ONLY cigar lounge in that area in Deadwood.  But after a couple games of black jack and some marginal food you’ll want to move on.
Here you’ll have the option to go to Sturgis if your dad really wants to see it.  It’s nothing exciting, so don’t dilly dally.  But regardless of whether you go to Sturgis or not, you will have to head back the way you came to dead wood to Lead, staying on Alt 14/85 to a crossroads called Cheyenne Crossing.  Hang a right here on 14A/ “Spearfish Canyon Rd” and drive that ALLLL the way down to the town of Spearfish.  Here, you’ll hook up back to the interstate and drive to Buffalo where I recommend you stay at the Occidental Hotel, but one of the cheaper ones will suffice.  “Dave” is the older gentleman who runs the place.  Tell him “Aaron the dance instructor” sent you guys and pony up to the bar you won’t find another like it. 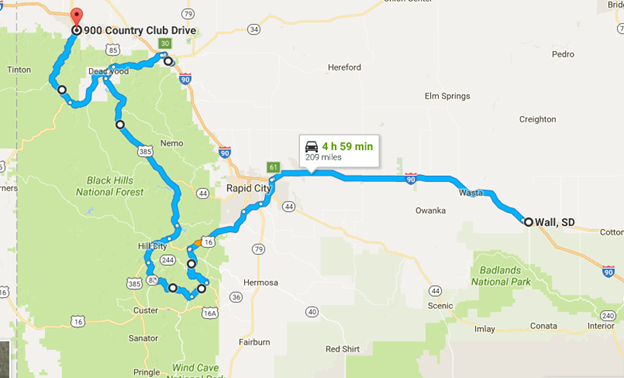 Here, you will need to check weather and road conditions in Wyoming.  Specifically if BEAR TOOTH PASS is open.  If it isn’t, your goal will be to go Yellowstone national park and Grand teton’s national park via 14.  If not, then I’d recommend spending time in the Big Horn mountains specifically Crazy Woman Canyon, Ten Sleep Canyon, and going up to Sheridan.  Still, “ideally” you’ll wake up early and be prepared because you’ll have about 16 hours of traveling ahead of you.

Out of Buffalo, go over the Big Horn mountains to Tensleep.  You will go through Ten Sleep Canyon.  It is worth it.  Go north out of Worland to Greybull hang a left on 14 and take that to Cody.  You will go north on 120, but your goal is to go via Chief Joseph’s Highway (Dead Indian Hill road) to Bear Tooth Pass Highway (also 212).  Go right on 212 to a town called Red Lodge, Montana.  The pass down will probably be the coolest thing you see on this entire trip until Moab.  So pray the pass is open.
Fuel up in Red Lodge, turn around, go back up the pass, back to Cody, right/west on 14 again into Yellowstone Park.  Drive around, take some pictures of buffalo and hot springs, but don’t take too long or the sun will set and you won’t see the Grand Tetons.  Regardless, take 14 to 191 south into Grand Teton’s National park and Jackson, where I recommend you stay. 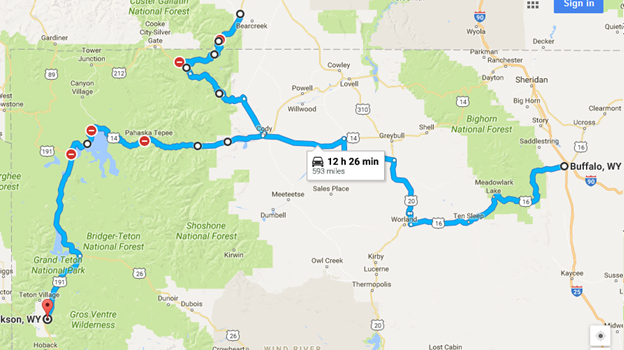 If you haven’t seen the Grand Tetons, go back north on 191, look at them, say “wow” and get your asses back in the car going south.  You will drive to Grand Junction, Colorado, taking 191 south through Rock Springs and Vernal Utah (use your GPS/phone).  This route is more scenic and you have the option to stop at Dinosaur National Monument which is optional, but pretty cool.  You will want to stay in Grand Junction because it’s going to be a HELL of a lot cheaper where you’re going next – Moab, Utah.  Still, if there’s daylight, I’d recommend driving through Colorado National Monument (national park pass should pay for itself by now) and getting a hotel in Grand Junction for the evening.

You will drive to Moab Utah, but you will NOT go the most direct route.  You ABSOLUTELY MUST take the alternative back road called 128.  You will not regret this drive.  It will bring you to Moab, and you should have plenty of time to drive through Arches National Park as well as my favorite park, Canyonlands National Park.  Unless you and your dad TOTALLY PREPARED for some major hiking, just drive through and look at the parks.  There’s not much else to do.  You absolutely must drive to the end of Grand Point view road AND if you are courageous enough, drive the switchbacks down on Schafer Canyon Road.  Drop the money and spend the night in Moab even though it will be pricey.

There are three parts to Canyonlands National Park.  The first one being up north by Moab.  Another one located to the south where the entreance to the park is on 191 and 211.  It’s worth driving there and doing a little hiking if you feel like it, but your next stop after exploring this area a little bit will be Cortez, Colorado.  Cortez isn’t that far away so if you want to recoup or just explore Moab some more, go ahead.  But if you get to Cortez and there’s enough sun out, you must hike at least a little bit of “Canyon of the Ancients”  The trailhead is several miles west of Cortez on Road “G.”  Keep driving, there’s a big sign on the north side of the road that marks it.  Hike up those trails and you’ll see scores of ancient Ute Indian adobe dwellings from the 1100’s.  You can see the same thing for $25 and a 2 hour round trip, with a MANDATORY PAIN IN THE ASS PARK RANGER CHAPERONE at Mesa Verde National Park to the east of Cortez which is a royal pain in the ass and not that impressive.  Ergo, I strongly recommend Canyon of the Ancients over Mesa Verde

Drive from Cortez to Durango, then north to Ouray.  More majestic mountains, AGAIN CHECK TO MAKE SURE THE PASS IS CLEAR.  From Ouray, your goal will be to hit Black Canyon National Park.  You can’t really hike it because they are 1,000 foot sheer cliffs, but they’re amazing to look at.  After an hour or so there, drive to Colorado Spring OR if you want to just sit and chill in a mountain/white water rafting/microbrew/pothead town crash in Salida.

Pikes Peak.  Just outside Colorado Springs.  Again, make sure it’s open, pay the $10 and drive to the top.  I would also maybe check your oil and brake pads before driving up it.  After that I’d head back to Denver where you will HQ for the rest of the trip.

After that, that is the MAJORITY (though not all) of the major sites to see out in Colorado, Wyoming, parts of Utah, and South Dakota.  Obviously if you rush it you will do it in about 9 days, but you’ll obviously want to rest up or just explore some areas more than what the mad dash schedule recommends.  Since you’d likely be looking for work in Denver, I’d spend a little more time in the town just to get to know it even though it may not be as exciting.  Regardless, here are some day time trips to consider:

This is some good stuff here, hope it motivates someone to get out there.