New sponsor and I was going to plug the book, but the description the author sent me was compelling enough I didn't have to write anything!

Montrose County is a story that could be tomorrow’s headlines.  An Islamist organization has dispatched two teams to hit the President and two visiting world leaders at a resort in western Colorado.  In Iraq, a pair of NATO commandos have discovered the planning documents in the remnants of a bombed out house, but have no means of communication with which to raise the alarm.  In between is Montrose County Deputy Sheriff Sabrina Murdoch.  Originally from New England, she’s an Iraq war veteran scarred by her experience.  When her life fell apart after her return from Iraq, she hit the road in search of a place to start over, and ended up in the far west end of Colorado.  Bit by bit, she has been rebuilding herself and her life.  But now, as the two Canadians face a mile-by-mile struggle to get back to their base and a radio, Deputy Sabrina Murdoch edges ever closer to her own confrontation with an enemy she thought she left behind. 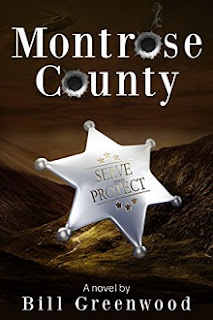