Is the US in Another Housing Bubble?

It's approaching 10 years since I wrote Behind the Housing Crash, and certainly beyond 10 since I started writing it.  I've long abandoned the banking industry and frankly have forgotten most of the metrics, statistics, methods, and techniques I used to predict the bubble (amazing how if you don't get paid, you forget).  That being said, I did want to check in on the housing market to see if perma-low interest rates have inflated prices back to their 2007 levels and my findings, truthfully are mixed.

First, yes, according to price to rents we are back where we left off in the nose bleed section in 2007. 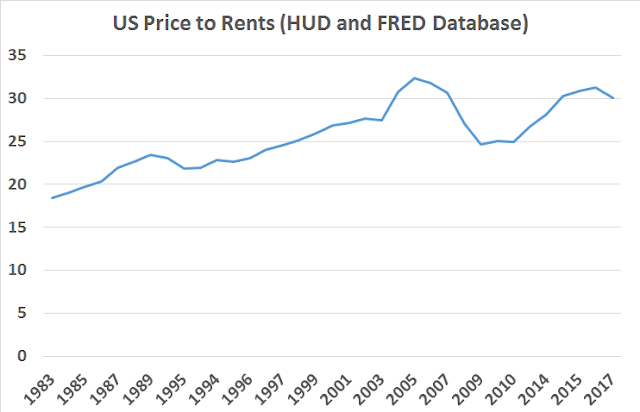 The price to rents ratio has tapered off a bit since its second peak in mid 2016, but based on historical data, prices have outgrown rents across the country significantly since the second great Keynesian expansion under Obama took place.

This has allowed people to not only buy more housing on the same income, but make significant dents into their mortgages if they held onto them.  Couple that with the bad taste the housing crash left in people's mouths, it was only the long term players and home owners that were buying houses.  Not the dipshits and douches in Phoenix, Florida, Vegas, and California playing "Let's Flip This House Dude Bro!"  These variables assuage my concerns about the high price to rents ratio in that the market is not as liquid, a higher percentage of homes are not second, flip or investment properties, and 98% of the housing market is not financed with 947 to 1 ARMS with NINJA quality underwriting.

Further assuaging my concerns of a bubble are vacancies.  While rents are relatively low to prices, vacancies are just above half of the double digit vacancies we saw right before the housing bubble. 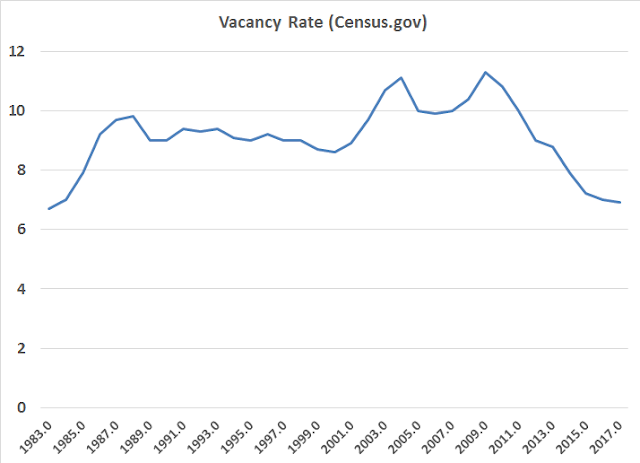 While the overall housing market and rental properties are not the same market, this tightening of the rental market provides somewhat of a floor that rents will unlikely fall through.  Yes, people looking to rent condos in downtown are not looking to rent suburbanite homes, but in case of an emergency, a collapse, etc. etc., spare rooms and bedrooms are commodities in that they have potential rental value.

Finally, related to people paying down their mortgages instead of taking on three extras, combined with long and low interest rates, debt servicing to disposable income is also trending low.

I know the argument against this is that the asset, the house, only has value based on its rents, but we have to admit a large percentage of the housing stock is to be lived in by its owners and is not purely rental property.  And artificial, disagreeable, and unprincipled you might find abusing monetary policy to pump up housing prices, low interest rates have lessened people's mortgage expense on their personal budgets, meaning they can indeed afford more housing on less income.

Does this mean I'm advising people to go out and buy their first home or perhaps look at rental property as a means to retire?

No, not at all.  Truth is, I'm still very skeptical and wary of the high price to rents ratios the country as a whole faces.

But what I am advising is that people who are interested in property be VERY careful and proceed with caution.  The above figures are nationwide and real estate is a very local game.  You will want to do a thorough and complete analysis of the housing market you're interested in before committing your life's savings and agreeing to a 30 year commitment.  Some markets, even individual houses, are a great buy.  Some property is a good deal.  But given the valuations and the fact that the 30 year mortgage rate may not hang around 4% for the next 10 years, there's a lot of properties and markets out there that just aren't worth it.  Make sure you do your homework.
_______________________________

Aaron Clarey is a former banker and economist.  He now sits on his ass, sleeping in till 1030AM as a micro-internet celebrity.  If you need advice, consider hiring him at his egregiously expensive, but totally worth it consultancy, Asshole Consulting.
Posted by Captain Capitalism at 12:05 AM

I still think buying over renting is a much better long term play. Even if you get a 30 year mortgage, your P&I will continue to be the same throughout; your only price spikes will be taxes and insurance (which won't change all that much). With rent, you're much more hostage to market forces.

Of course, the big drawback is that to really make buying pay off, you need to live somewhere for like 6-12 years. I bought in a major city, where salaries (and prices) are high, so I've kind of married myself to the rat race. Potentially not a great idea, versus saving your money while in a high salary area and buying outright in, like, Arizona.

Cappy - the only reason the real estate market in the town i live in is heated is the school district. Thanks to being surrounded by dropout factory school districts this one is doing great. Buying at the depth of the downturn also helped, but I also see people get really really greedy and getting their hands slapped by the market.
I would always state: choose a house based on the cost of rent, and it better be less. I was paying 1600 for rent for a premium apartment, and I said NO WAY to rent increases, then relocated to an apartment for less money a month, and then 2 years later bought a house for even less monthly rent. Screw the view/etc, it's rent that determines whether it's a good deal

I love this post. Sent it over to my aunt who just made the absolutely worst decision to buy a massively overpriced small flat not yet in existence (to be in 2019) in a miserable spot - and where literally hundreds more of the same are being built. I think she's in some sort of a frantic greedy state where she lacks all objectivity. It will only burn money. But she'll probably dump that money all the same into that hole-to-be... I'm not hopeful of a cure. She's wearing her pinkest glasses.