New sponsor for those of you who enjoy fantasy fiction, mixed with a little western feel: 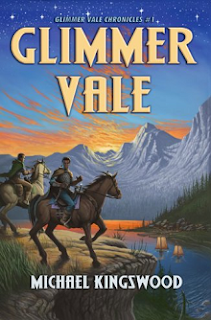 Raedrick Baletier and Julian Hinderbrook are two swordsmen on the run from their past. When they stop in Lydelton, a small fishing town in the remote valley called Glimmer Vale, they find the town besieged by a ruthless band of brigands. Worse, the brigands have taken up station in the mountain passes, blocking the two friends' escape. With no way around the brigands and no option of returning the way they came, Julian and Raedrick accept an offer of employment. Their mission: defeat the brigands and restore peace to Glimmer Vale.

They are outnumbered at least twenty to one, long odds even if they recruit help. But that help may not be enough when the specter of their past rears its head, forcing Julian and Raedrick to openly face what they are fleeing or risk losing not just their freedom but the lives and fortunes of Lydelton's inhabitants.
Posted by Captain Capitalism at 11:00 PM

Captain, you did not say it loud enough, the motherfuckers are downplaying the importance of IQ, they even say you should avoid to put it in your CV. Maybe they prefer to put in a CV how fucked graduates are with a degree in butterfly-scums.

I just measured my IQ, its close to yours and I searched online to see what people think about having a high IQ. By their words I conclude they seek a free bus ride, whilst we pay the ticket for them. Having the skills to do those things in that test in no different than having the skills to tell a falsified theory like: "IQ is not the most important in the workplace" and dozens of other theories which are the base of Leftism/Marxism/Feminism.