Conventional investing philosophy is that the stock market goes up and down, but over the long run, stocks generally trend upward. This simple principle is what over $10 trillion worth of 401k's, IRA's, pensions and other retirement vehicles are based upon, as well as pretty much every Americans' retirement. Ergo, yes, stocks may be down, but "don't worry, stocks go up in the long run, now might even be the time to buy."

Alas, I think I need to remind people of what happened to the last 1st world nation that suffered from a stock bubble and a housing bubble; Japan.

You see, Japan, back in the late 80's was growing by leaps and bounds, imminently approaching its WWII rival in terms of standards of living and economic power. Because they were destined for greatness, Japanese stocks and property were destined for great price increases. So great that the price outstripped any realistic notion of profitability or rents those stocks and properties could feasibly generate. A bubble formed, then popped and HAS NOT RECOVERED IN THE PAST 20 YEARS; 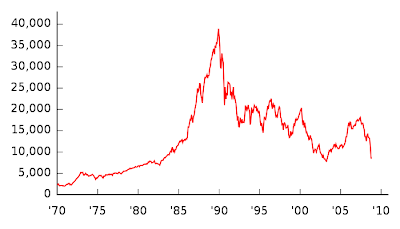 The moral of the story is that this is a very likely scenario for the US as well and throws a little kink into everybody's retirement plan. Oh, I know Goldman Sachs and American Express and whoever else out there said you can rely on the stock market to provide 10-11% annualized return, but you see it is quite possible many people will never see their 401k's recover, because, well, you can't just live off of increasing asset prices. Profits have to increase as well. And given the utter distaste Americans have with producing wealth (not to mention Obama's insistence on punishing it), a very Japanese like 20 year period of economic malaise and stagnant stock prices is certainly a possibility.

Enjoy working till your 80.
Posted by Captain Capitalism at 12:03 PM

35 years old here, pretty much always expected to work until 80, given new drugs & technology (and seeing my folks get bored as hell while retired)

Besides, I was thinking that those years from 65 to 80 would be seeing my savings at their high point, and any percentage return on them would represent their most profitable years.

Yes, the recent events are throwing the 2nd paragraph's latter assumptions into question....

Couple things: AmEx left the financial advice business in 2005. What was originally IDS is now Ameriprise.

Second, how would that chart look in real yen? And when do we get 17% returns just by holding cash?

Convert it into yen for me and e-mail me the chart.

I had a chance to see Robert Schiller speak in NYC last month about the potential shake-out of the current financial crisis. He used Japan as an example as well and said we're not at the bottom yet. Also, to not expect a v-shaped recovery.

Do you not have a 401K? Or are you expecting as much from it as social security?

Where are you invested? It seems like there is not an asset or market you seem interested in, except maybe for attractive non-feminist economist lovers. And those are to rare to price.

There are a lot of similarities between the US today and Japan in the late 80s, but Japan's asset bubble was more severe than the US (I'm not kidding, either; the real estate value of Japan was greater than the rest of the world combined) and it wasn't a housing bubble. We certainly could have stagnant economic performance for a decade or more, with a recovering taking place more quickly if the government does less to try to force one.

I'll take up 4 to down 40, thank you very much. Annualize that and it's gonna take years for everyone's stock funds to catch up to me.

Off the top of my head, I seem to have read somewhere that Japan has made a few political choices that have prolonged the agony, protectionism, make-work programs, goverment interference and so forth.

No chance the new US chosen-in-command and Pelosi&co will make those mistakes.

I have no 401k nor IRA. Just another thing for the US to tax. I would pay down debts or invest outside the US in stable countries. Norway, China, Sweden, etc.

Yes, there are many similarities. stock/property bubbles, 0 infaltion/deflation, negative real interest rates and large government "stimulus" plans that did jack.

I live in an apartment. The easy apartment life style is great. I love to play vidoe games on my wii, or playstation 2. I have a
46 inch LCD HDTV. I attend the local university, online and inseat. I go to work everyday, I did not lose any money in my 401 (k) last year and I don't own a credit card. I drive a three year old car (paid in full) and I am completely debt free. I save 55% of my pay check each week.

I am a baby boomer.
I am a female.

Ed, I met Robert Shiller in January at the American Economics Association meetings and he said the same thing. The Case-Shiller house price index is showing larger losses than FHFA, particularly in low price tier homes.

Ryan, commercial real estate is the next big bust in the US. Cap rates and vacancy rates are rising fast and transactions are incredibly low. Financing is super tight. Multifamily housing is having record foreclosures. Hotel REVPAR is dropping. Luxury condos in San Francisco are lowering their prices.

If residential housing got us into this mess, CRE is going to kick us hard while we're down.

It's really beginning to look like Great Depression territory. I'm sorry to say that if this 'stimulus' bill is all we got, it's too little in all the wrong places.

You are NOT a baby boomer. You may be the same age, but your financial discipline and appreciation for the video gamage makes you marriage material!