Your old Captain was very happy with what Santa brought me. Among other things I got Snoopy Bandaids, Tabasco Sauce Boxer Shorts, and a Bottle O' Rumpie (of course!) But I wanted to highlight "The Man from UNCLE" DVD series (replete with secret agent attache case!) because this is a MUST if you wish to truly enjoy the decline. 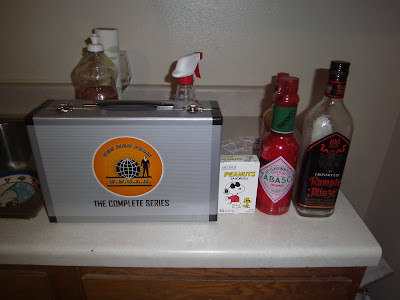 If you have not watched it, then I STRONGLY recommend renting it or getting it on Netflix to see what I'm talking about. Everybody is in suits, except the women who are all in sharp, tight fitting business skirts and are ALL (surprisingly) hot, skinny, early 1960's motif chicks, ALL of which have GUNS HOLSTERED ON THEIR BACKS (because they are super awesome sexy spy chicks from the 1960's!)

The writing and the screenplay is also excellent. Sometimes those old TV shows are slow and kind of simplistic in their plots. But this is akin to the writing of Casablanca or "Peter Gunn" if you ever watched the show.

Regardless, it's libertarian, conservative, American mind-candy fantasy in that this was what America was meant to become by today's standards. That is until we let the communists, feminists, liberals, crusaders and effeminate males have a say in how the country should be run. But if you think about it, the liberal/commie/feminist/etc., types can only hold up "Murphy Brown" or "Teenage Mom" or modern day reality TV as the pinnacle of socialist achievement in television.

As Ilya Kiryakin and Napoleon Solo would say:

Enjoy the decline!
Posted by Captain Capitalism at 4:31 PM

So the good Captain is having a THRUSH flush?

THRUSH will never take me.

Though his one THRUSH agent was a SMOKING HOT blond in one of the earlier episodes. She could take me. I'd betray UNCLE.

Will check out the show. I trust your judgement since your a fellow Rumpie drinker.

You shan't be let down.