Book Review of "The Return of the Great Depression," By Vox Day

Vox Day, aka Theodore Beale, has several books out, most of which by a perusal of his site are along sci fi and fantasy/fiction lines.  However, perhaps his original claim to fame was a book I've been procrastinating reading "The Return of the Great Depression," available in both paperback and kindle. 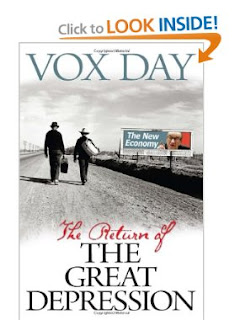 Unlike the title would suggest the majority of the book is not, in fact, about the next Great Depression as much as it is a very good analysis and study of conventional and historical economic theories and how they are playing out during today's turbulent and uncommon economic times.  This is my largest complaint about the book in that I was expecting a book on the next Great Depression and what this man's thoughts would be, but it isn't until the second to last chapter that you actually get to his own personal observations and theories.

That being said, the book was certainly not a let down, surprising me in other regards warranting the purchase AND READING (that's for you, Aunt Judy) of his book.  First, the book is an outstanding, thorough, but succinct analysis and comparison of the various economic philosophies that are duking it out today.  He compares and contrasts Austrian, Keynesian, the Chicago School and Marxism in ways that shows he's actually read vastly more books on economics and philosophy than I have and can use words like "praxeology" in a sentence.  THis makes him "one of those guys" who while would be considered a Buzz Killington at a party, is the guy you'd probably defer to when it came to matters of economic history and technicality.  Second, like reading other economists, you always pick up a trick or two you weren't aware of or observe mistakes you may have made (for example his explaining what the GDP deflator is NOT the same as the CPI may not help you pick up chicks at a bar, but will provide for some interesting adjustments to modern day RGDP).  This has not only further advanced my understanding of economics, but plugged some minor holes in my own economic theories and philosophies I've procrastinated plugging.  Third he writes very well and very dense, efficiently packing as much information into the fewest and optimal amount of words.  The introduction alone is a perfect synopsis that would benefit everybody in terms of "what economics is."  Finally, the man is a genius.  I say this not in a flattering way but because he belongs to mensa and factually is a genius.  This means his writing and the pace at which he covers and delivers material, concepts and theories, etc., is not slow and is sure to engage, if not challenge your mind (sometimes requiring multiple re-readings of certain paragraphs).

Unfortunately, this leads to the second largest drawback of the book, it will shoot over most non-economist's heads.  Though intended for "economic actors, not economists" and purposely simplified in language, vocabulary, mathematical formulae and charting, it's obvious Beale has been in an environment where his mind is among equals.  Even "dumbing it down" it's still a heavy read requiring your full mental attention and a constant referencing of the glossary.

Ultimately the book is a great read for two groups of people.  Those those already in the profession and (more importantly) people who have an intellectual or hobby interest in economics, but are not in the profession.  It is this second group that would benefit most, not just because of the exercise your brain will receive, but Beale does a great job breaking down the current and past economic philosophies, providing you the background and history as to how different schools have come about and how they are playing out in the real world today.

It is worth the price of paperback, but the $2 price on Kindle practically compels you to purchase it.

Posted by Captain Capitalism at 1:16 PM

I'm always up for a good economics book! I still have a few on my Kindle that I need to read and I was even going to think about reading some stuff about Keynes too, particularly this book called "Keynes: The Return of the Master" just so I can see why Keynesianism (New and Post) has made a massive return as an influence on various policy suggestions. Thanks Cap!

I bought and read RGD in 2009 after it came out. It was largely over my head at the time. I've been meaning to reread it this year in light of all I've learned about economics and human action since. I'm sure it will make a lot more sense this time around.

I liked it too. Very interesting analysis. Great writing style. I wish I was smart enough to write books like this.

However, Vox gets into various esoteric theories of economic cycles, which lack supporting evidence, in the latter part of the book.

Vox Day is a very bright guy. However, he does have his ideological biases, some of which is not supported by empirical evidence.

"Vox Day is a very bright guy. However, he does have his ideological biases, some of which is not supported by empirical evidence."

Maybe ,maybe not, but having read Vox's blog for a while, I'd be loathe to bet against him when he opines on the topics he knows about.

He's well read and smart, and if he seems to have ideological "biases", my assumption is that that his adherence or support of an ideology has a basis in something solid. Until proven differently.

I know that several times I've written him off as biased on some topic only to be brought back some month later when he explained his line of reasoning - and I was the who had to go back and examine MY biases.

Thanks for the review. Being and Engineer (and also having an MBA FWIW) I'll take a $2 chance on being able to keep up. Looks to be good reading for those not afraid to think.

I'm reading the book right now. Intense read but I feel its needed to understand the implications of past bad policies.
I have a question-Do you feel that one can enjoy the decline AND make money on trends in the market?
Enjoyed you ETD book! Makes a lot of sense.