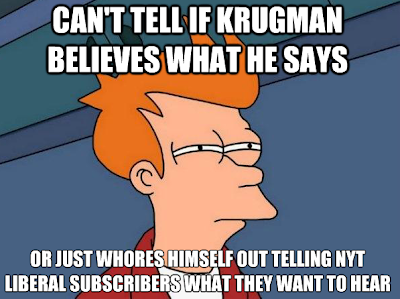 Posted by Captain Capitalism at 5:48 PM

Krugman doesn't give a flying shit anymore. He just wants another Nobel Prize for himself for misleading his readers, despite having written a reportedly excellent textbook on international trade. He even wrote a few microeconomics and macroeconomics textbooks and claims that he's a free market welfare state economist.

I wish Krugman wasn't such a douche when it comes to criticizing his adversaries and can consider debating Bob Murphy, since Austrian school economics isn't as "influential" in the GOP as he claims it is. The Bob Murphy Warren Mosler debate is the next best thing though.

I bet he pulled some of the same BS on Steve Keen too a long while ago.

Stupidity only goes so far.

It's really sad. He used to stick to economics before the 2nd Bush administration and was really good at explaining complex economics in simple terms. He called the Asian Crisis in 1998, even making sure to note that the idea wasn't his but a grad student he knew at MIT.

A mind ruined by idiology. What a waste.

So many liberals rub Krugman's more recent dillusional quotes in my face. I hate that guy.

Maybe he believes he believes it. Frankly it strikes me as bog-standard beta male BS, saying and doing whatever he thinks will please women who are almost always not worth pleasing, even if it were possible (and it rarely is).

Recently he's been inviting guest columns from a female poli-sci prof at Princeton. She uses her space to talk trash about the constitutional reforms proposed by the government of Hungary, which, without going too far into the details, are designed (among other things) to put the Hungarian communist party out of business for good. The Princeton prof claims it's all a plot by racists and fascists (i.e. people who expect the law to be enforced against criminals, no matter what they look like) to turn Hungary into a dictatorship. Most actual Hungarians claim she's either a dupe or an accomplice (nobody's sure which) of the Hungarian communists. All her "reliable sources" are notorious socialist and communist sympathizers and fronts in Hungary and abroad.

The comment threads are full of people living in Hungary who know what they're talking about, telling her she's completely off base, appealing to the facts and the reality of the Hungarian situation. She refuses to listen, of course, and Krugman hasn't the nerve to even do his own fact checking, never mind to tell her to STFU or get her own blog.

Someone needs to tell Paul that she's never going to sleep with him, and it's not worth making his name mud in another part of Eastern Europe trying to get her panties off.

Whore - but they are good things. This guy is just a dry bit of sh!te hanging on an arse hair.

He also married some b$itch that is in broadcasting at NBC I think; so even more warped by the MSM alternnate dimension idiocy