Worse Than I Thought

I remember a year or two back somebody ridiculing me about pointing out our dropping labor force participation rate.  He said it wasn't because of socialist policies deterring people from working, or because of a lack of economic growth promised by Barack Obama, but because old people were retiring.  He even sounded pissed about it suggesting us fools didn't know what we were doing AND if I recall correctly, he claimed to be an economist.

I believed I had already looked it up to confirm what was happening with labor force participations rates between the young and old, but I had a nagging twinge in the back of my mind that I didn't.  That it may have slipped my mind.  And sure as worthless people majoring in the humanities, I was right!  It did slip my mind!  Here it is: 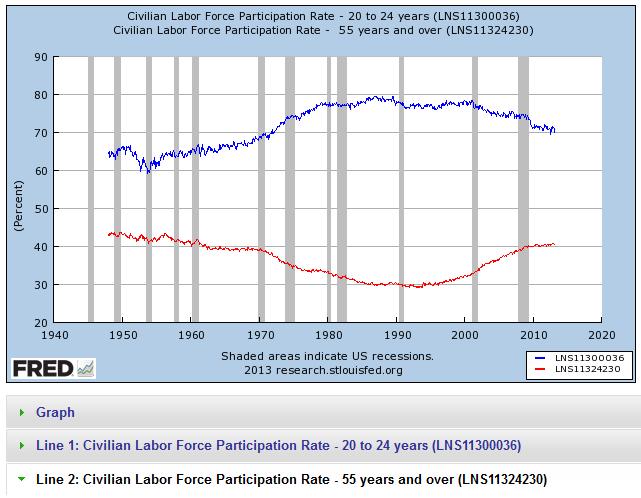 I would have remembered this chart because it not only proves the guy wrong, it is the OPPOSITE of what he claimed.

Not only are things so bad, young people are dropping out of the labor force, OLD PEOPLE WHO SHOULD NORMALLY BE RETIRED BY NOW ARE RETURNING TO THE LABOR FORCE!

Well, the politically correct answer is what Time, Newsweek and CNN will tell you-

Tilly and Herman are just so active nowadays and they're just so intelligent that they can't stay at home and enjoy a life of leisure, relaxation and retirement.  Heavens no!  They WANT to go back to the labor force.  They don't really need the money.  They're just doing it to keep their minds stimulated!  How hip and cool they are!

The truthful answer is -

They didn't save up enough for retirement and HAVE TO go back to the labor force.  They were very poor at financial planning and even with social security and medicare they still don't have enough to retire.

I'm just wondering how long a country can last where it's dying/near dead population is returning to work while the "children who are our future" are dropping out.

Oh well, enjoy the decline!
Posted by Captain Capitalism at 7:42 AM

Just another example of how the fiscal irresponsibility of our parents and grandparents, both public and private, has screwed us over.

Insanity is trying to do the same thing over and over again and expecting different results, but people will still keep saying that it's because of neoliberalism and austerity that we're in this mess without being able to see the obvious right in front of their face! That's what Labour Party fanboys keep saying about Thatcher and the high unemployment that she had to deal with. The people on the right are saying that despite the unemployment being slightly higher than other European countries at the time, the UK has outperformed most countries in that region regularly since 1980. What do you think of the situation?

Also many people who hoped to retire soon can't. They've had to take cash out of their 401k's to pay their bills. And older people who never worked for a company that had a 401k have relied on bank CD's as their retirement plan and with interest rates set artificially low by the Fed their savings haven't even kept up with inflation. And if they worked for a company that has underfunded retirement plans or has gone bankrupt they're screwed. My retirement plan is to die, hopefully before I become a burden to my family or society.

Cogitans, knock the Gen X/Y whining shit off! Not all of the Boomers are irresponsible, just as not all of the little Pukes your age are whiners.

Cappy, I would add to your commentary that a lot of the responsible retirees are back at work due to all the government spending/taxation that has inflated the cost of living to obnoxious levels and derailed well intended plans.

Well there is inflation (aka negative interest) + no interest on savings, you saying that - by itself - should be enough to keep anyone from retiring?

I would also guess that the old folks are working to continue to support their 20-something kids. The parents have established careers and may also be overpaid union un-firables. They can make more than junior can working at the coffee shop.

RobertYates said...
This comment has been removed by a blog administrator.
2:16 PM

Why would anyone go to a website with a .exe in the URL path information? Thats a good way to get a system compromised.

Someone actually claimed that the drop in participation was people retiring? Hello McFly, even the BLS puts out stats on the participation rate by age group. Participation by young people has been disastrous for a decade now...

As a 50 year old, I now believe it doesn't matter whether or not I've saved enough for retirement. I'll be working almost until I drop - if only to remain on my employer's health insurance (if it still exists). If I have saved enough, the government will pronounce me "rich" and tax it. If I haven't, the government will pronounce me "rich enough", because, retiring at the tail end of the baby boomers, they can't afford to do anything else.

I'm f*cked. My retirement plan should be dying of an accident at work as late as possible.

Or...they ran into some surprise medical expenses for their children. My expenses last year spiked to $278K. Of course I can claim some of it on my taxes as medical tax deduction but....it was a massive hammer requiring refi-ing my house. Since I had saved up a lot of equity in my house due to prepaying my mortgage -- I actually HAD the money to cover the medical. But yeah -- I figure I will work until it is time for my dirt nap.
--SunSword