Is the US Cooking the Books on GDP?

An old school trick economists use to measure the true economic growth of countries where their governments are not...um...known for publishing accurate and true figures

is instead of taking the liar's word for it, they instead substitute electrical consumption.  This is a reasonably good proxy, unaffected by inflation or distortions from government bureaucrats and can be easily measured.

So I decided to do the same thing with the United States.

Here is electrical consumption vs. Real GDP going back to 1949. 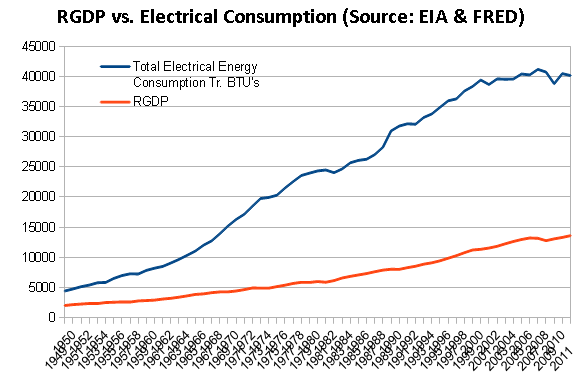 Because of the varying axes it is important to index both to 100 in 1949 to see whether one is growing faster than the other.  Here is that same chart indexed: 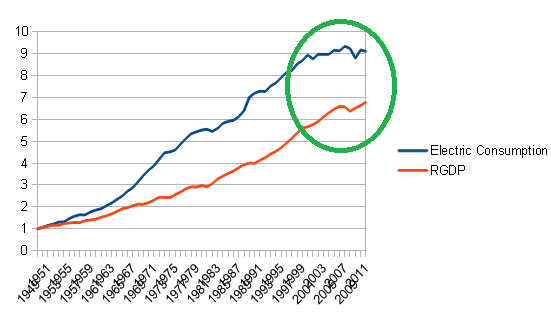 If you eyeball it, it seems the opposite of what I was suspecting was happening.  Energy consumption is growing faster than GDP suggesting we've been UNDERSTANDING our economic growth.  I double checked the figures , thinking I had erred, but they prove to be the correct.

Understand, however, I still actually think this is an error because if anything the US has become more efficient with its energy and I have seen GDP/unit of energy figures proving this.  But here's the interesting thing.  Even with this error (that goes against my original case) this data series actually ends up proving it even more so, notably by what I spy with my little eye in the green circle. 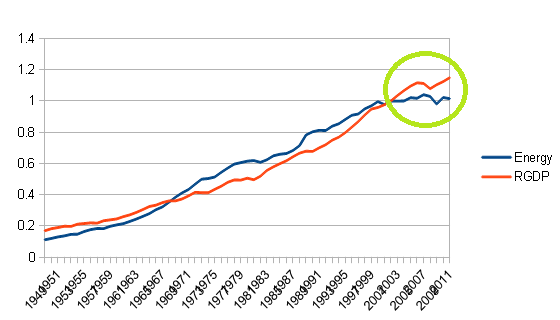 This is what I feared was happened.  Where the government says,

When the energy consumption does not prove so.

Now it is hard to say whether this is because of measuring differences as the chart shows the two do not perfectly correlate with one another, but NEVER in the history of the two data sets has GDP been a full 13% higher than what electrical consumption would suggest.

I can only want to see how much larger the differences will be once we adapt the "New GDP" measure.

(also, any thoughts on the discrepancy or data source from the EIA would be appreciated).
Posted by Captain Capitalism at 9:30 AM

Also you are 100% correct, the relationship between GDP and kwH is not 1:1, over time we've actually gotten quite a bit more efficient.

ALSO the US has lost of a lot of heavy industry over the decades, the kind that gobbles energy.

It is a reasonable proxy over the short term unless some disruptive technology has occurred no one told me about.


The same can be said about fuel consumption per GDP.

All of the major statistics; unemployment, inflation, and GDP are massaged for political purposes. The bailouts of 2008 proved that our government and society is just as corrupt as Japan or China. Only the style of corruption is different.

As you are using real GDP I suggest we may simply be understating inflation.

"Understanding?" Should that be "understating?" It didn't read quite right...and do feel free to delete this comment if it wasn't a typo.

Either-how, interesting stuff. I wonder if we could get similar data on the countries mentioned (though likely not) just for comparison's sake.

Is the last chart total *energy* consumption (including oil & gas for home heating and industrial use, coal for blast furnaces, etc) or is it also specifically electricity?

I don't think that energy is a good proxy for gdp growth any more for several reasons. One you stated, we are getting better at doing more with less energy. The other is that in the first part of the 20th century most of the GDP would come from high energy activities, like making steel, aluminum, and cars. Banking and software development takes substantially less energy. I am in the electricity business in Ontario, and although the economy has sucked for a while, electricity consumption is way down to the point where we are taking power off line and delaying new power projects to to lack of demand.

Nice analysis. I need to think about it more.

Energy efficiency and energy intensity are important to consider, and those explain why GDP is rising faster than energy use. Electricity is only one form of energy we use, and thus it is a somewhat inaccurate measure of energy use.

I'm not sure that I would necessarily blame cooking the books. At least not yet.

I'd blame it on lack of resources for America's statistics agencies. I've worked with several and you have to realize just how badly funded they are. They have to use outdated or just plain wrong equipment to do their jobs. They aren't given proper budgets to collect and pay for data. They are chronically underfunded and marginalized. It's pretty telling how seriously the voters and politicians take the stats agencies when the most important one, the US Census, is in a dilapidated building in the worst neighborhood inside the DC Beltway (Suitland, MD). Contractors have to beg people to work there because so many of their staff have gotten attacked on the way to work or lunch.

I wouldn't be surprised that the BEA or EIA doesn't have the funding anymore to properly measure things causing the discrepancy.

It would be really cool if you showed electrical usage vs. GDP growth for countries like China, Argentina, or Venezuela so we'd have some sort of comparison to see how useful this type of measure is.

Otherwise, NICE WORK this is great.

One thing the USSA federal government has done is to create total disbelief in government numbers.

A thing that my colleague from an ex-communist country points out was common in his country.

The government sayd the sky is blue; everyone gets their umbrella out.

Not questioning your sources, the data or the analysis or your postulate...

Does the shift of the US economy from a manufacturing-based economy to a knowledge-based or service-based economy have an effect on the GDP vs. electrical energy use relationship and if so, can it be quantified?

Obviously, any effect would have been gradual in coming and would have started far earlier than the last few years.

Yes, I think they're cribbing the numbers - the next question is how.

I take it as axiomatic that the US has the most corrupt government in the world; led by filth who will say anything to make itself look good.

It used to be that sulfuric acid production was a good measure of industrial productivity. Probably no longer true.

It is amusing to note that in WWII, the German Army Ultra was read fairly well. It was found that the generals lied like Hell - they wouldn't admit defeats readily, but also they overstated their losses - they always wanted more tanks and more fuel. However, by the tedious analysis of quartermaster communications (actual loses, need for parts etc.) it was possible to get an accurate estimate of German armoured forces.

Robert Conquest remarked that in the late 1930s Stalin put together a team of economists to analyse the state of the USSR. He didn't like their report so he executed them all. He then put together a second team, who figured out what he wanted to hear and saved their skins, for a little. Conquest noted that anyone attempting to make sense out of the second report were wasting their time - it had no relationship to reality whatsoever, merely to what Stalin wanted to hear.

I'm inclined to agree with those who feel the comparison may not be valid for the U.S. It's going to be very complicated in any case

Efficiency improvements will skew results. We've lost a lot of heavy industry, skews things the other way. The unemployed are using less. The proliferation of computers uses quite a bit more, so ...

I'm thinking usage of crude might be a closer match for us. High elasticity of demand, so the price changes aren't going to modify usage all that much.

Or just trucking. Most of what gets produced needs to be transported at some point...

In third world economies, energy would work pretty well. But we've changed so many things in the last 50 years it would take months to figure out the adjustments.

It's probably a workable approach if you can find the right commodity to watch.

Beneath the second graph you wrote UNDERSTANDING ... but I'm pretty sure, Cappy, that you meant to say UNDERSTATING.

Other than that small brain fart, an excellent analysis - as always.

That the way many huge corporations operate. What little feedback that goes up the chain of command is filtered and spun that quite literally the C-level execs haven't a frickin' clue what is really happening on the ground. And they don't care to get their hands dirty by doing a little bit of seeing how things really are through "management by walking around".

Throw obscene pay, utter cluelessness and hyper arrogance together and you have a clusterf*.

The most dense material on earth is bad news.

In the beginning was the Plan.

And then came the Assumptions.

And the Assumptions were without form.

And the Plan was without substance.

And darkness was upon the face of the Workers.

And they spoke among themselves, saying,
"It is a crock of sh*t, and it stinks."

And the Workers went unto their Supervisors and
said, "It is a pail of dung, and we can't live with the smell."

And the Supervisors went unto their Managers,
saying, "It is a container of excrement, and it is very strong, such that none may abide by it."

And the Managers went unto their Directors,
saying, "It is a vessel of fertilizer, and none may abide its strength."

And the Directors spoke among themselves, saying to one another, "It contains that which aids plant growth, and it is very strong."

And the Directors went to the Vice Presidents,
saying unto them, "It promotes growth, and it is very powerful."

And the Vice Presidents went to the President,
saying unto him, "This new plan will actively promote the growth and vigor of the company with very powerful effects."

And the President looked upon the Plan and saw
that it was good. And the Plan became Policy.

And this is how sh*t happens.

My bet would be electricity growth in the late 19th century would be the result of shifts from Oil to Natural Gas/Coal (mostly in the form of electricity).

Plot (no need go that far - a table will do) the reciprocal of Energy Density (i.e. tabulate the ratio GDP/Energy) over time. This will fall ~14% on your figures.
As economies get more efficient (develop, &c.) Energy Density should decrease (i.e. the ratio GDP/Energy should increase). Your figures show the opposite. I guess somebody's telling porkies.