I received a little blip of traffic that made it on my radar.  Not a ton, but something was sending me a little traffic.  Looked it up and found this.

In short it is a semi-disagreement-response to my post about how emulating Cary Grant would help increase your chance with the ladies.  However, it is not so much a disagreement piece about being charming like Cary Grant, as much as it is a critique of people thinking somehow the 40's and 50's were better in America and that today is just as good as it was back then.

But there's just one minor problem with this specific critique.

And I'm not saying this as a matter of opinion or a matter of arrogance, I'm saying it as a matter of fact.  He is wrong.  And not that his post was scathing or even unpolite, it is that he highlights something that really irks me - when people mock and ridicule people for daring to think yesteryear was better than today.  So permit me some evidence. 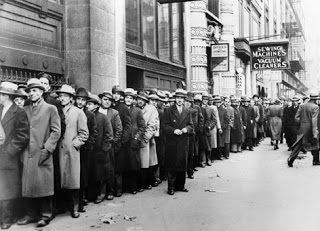 This is a picture of a soup line in the Great Depression.

Do you notice something about it?

What is odd about it?

Oh, that's right, even though we were in the depth of the worst economy in the past 100 years people still dressed their best when in public.  Today, our society doesn't even come close to that.

Admittedly, in intellectual honesty, I'm all for a little T&A, but not when talking about the quality and caliber for marriage material or people I'd like to associate with.

And for those of you who are arguing that "college girls" would naturally default to a more rated r version of images, fine, try another search for a more intellectual group

Third, the chart that should have won me awards, economic growth is decreasing (despite the government's best efforts to artificially inflate it).  Our current generation is only about 55% as productive as the previous generation and this is WITH advances in technology.

Fourth, debt.  I'm not even going to link to any charts or data because this is just common knowledge.

And while there are certainly some areas society is doing better in than in the past (say computer technology), for the most part the majority of economic and sociological data proves the people and society in the 40's and 50's were superior to Americans today.

I don't want to hear any inferior, minds-of-weaklings arguments about "moral relativism."

I don't want to hear any inferior, minds-of-weaklings ad-hominem attacks.

I don't want to hear any inferior, minds-of-weaklings name calling.

And I don't want some trumped up worthless liberal arts academic study done by some equally worthless professor who couldn't hack it in the real world using biased data to advance a political agenda.

No sane, rational, mature and intellectually honest adult can look at society today and say today's Americans are just as high quality or better caliber than yesteryear's.  I don't care how much you may disagree with it, you can all sit there, pout, hold your breath until your face turns blue and scream at the top of your lungs just what a mean-poopie head I am. Because in the end, barring some miraculous economic growth, the economic realities of our laziness and inferiority (in the form of massive debts) is going to come crushing down on us.  And when that happens you will be BEGGING for the days American's had the temerity, work ethic, and drive in the 1940's, because, frankly, that's the only thing that is going to save this or any other country.

If this post provided warm fuzzies, then return the warm fuzzies by buying something (you were going to buy anyway) on the Captain's Amazon site.
Posted by Captain Capitalism at 4:20 PM

You are right. People cared more about their appearance and the sense of entitlement that you find in society today was damn near non-existent in the 40's and 50's

Cappy, this is by far your greatest post. Dead on the money and anyone that disagrees with one minute point is nothing more that a moron. Bravo!!

I am 51, Male. Married with 2 daughters one a Junior in college pursuing a science degree, the other a Junior in H.S whom I think I'll pay for a boob job so she can be a stripper and actually earn a living.

Wow. You used the word "termerity."

Lauren Bacall vs Kim Kardashian...we have fallen so far, so fast.

Frankly, I cant believe you got picked up on First Things. As a long time reader I'd say that's a good thing. Check out Goldman (aka Spengler). He's got some points that you might find interesting.

Btw. They've been pointing out the decline of western civ and the damage done from liberalism and feminism long befoe the manosphere.

I am very fortunate not to be over my head in debt. When my wife left me with a house and two kids to take care of I had a hard time establishing a budget we could live on. Fortunately the house was basically a starter house for new families, not very big and not very expensive. I was able to refinance and lower my payments a little bit but my credit card had to bail me out many times when something would go wrong at the end of my paycheck.

I was also lucky and found a better job and I made a difficult but I think wise decision to sell some of my stocks while they were up and paid off all of my credit cards. Except for the house I am debt free. Being buried under debt is horrible and scary. I sleep much better at night.

But as for today's women (and men), mostly losers. I feel no sympathy for most of them. They dug their own holes, they can climb out of them.

It is striking to contrast the hippies and the "Occupy" crowd of about a generation later. I remember the hippies very well - they were of my age and included some of my classmates, though I was never very sympathetic to them. The two groups came from roughly the same social milieux - upper middle class with some working class thrown in, mostly with college education begun if not completed. To start with the differences, the Occupy people were not nearly as healthy as the hippies - the hippies came from families which knew what food was, and what hygiene was - the Occupy kids no doubt came from dysfunctional homes, mothers following their "careers" etc. The Occupy camps were infested with vermin almost immediately, whereas it took longer and was less pronounced with the hippies. The hippies actually had some education - they knew real things as opposed to socialist claptrap. Two years of liberal arts in the `60s would actually teach something. The hippies could debate. And finally they were much more creative - in lifestyle (communes for example, a few of which evolved into reasonable farms or businesses; and many former hippies went on to become successful businesspeople), arts (think of the many music groups who left an indelible record); or people such as Steve Jobs (even if you worship Bill Gates's behind you must know that Gates got a lot of stuff from Jobs - in fact the relationship was symbiotic in a rather fascinating way). The hippies made some real changes, by no means all good; whereas the no-one ever really figured out what the Occupy movement was (whenever anyone attempted to articulate a policy it sounded an awful lot as though they should have waked up and joined the Tea Party) and they are well on the way to oblivion by now.

Another point, about the smug and complacent article which set you going - is that no one should ever be proud of growing up in the 20th century. It was a time of unmitigated horror and destructiveness, probably even exceeding the Mongol invasions of the 13th C. The prosperity, decency, respect for law, and peacableness of the late 19th century dissolved in blood and death; and was followed by the ghastly Communist revolutions and the Nazis. The peace and prosperity of the late 19th century have never been restored and the chances of doing so recede with every day.

I don't even own a suit. I'm not even entirely sure of how to go about buying a good suit, but I plan to.

I only have one minor - quibble with an otherwise excellent analysis.

They're prettier today than when I grew up (both sexes). But it's only skin deep - back then beauty was much deeper, there was character and elegance. Most of that's gone.

Oh, and politeness. People were polite, it was normal. The first sign of a collapsing society is the lack of manners.

I don't like to speak poorly of my boomer parents, but they sure as hell didn't give me a work ethic.

It's not like I was spoiled or anything, but I had to develop a work ethic on my own - it's a hard process and I'm still improving, but I didn't get much help from them in that regard.

You nailed it again...

You are absolutely right. The moral standards, work ethic, education of the 40's and 50's were so much superior to today. What we are experiencing today is the culmination of the 60's hippie culture and liberalism that permeates our society and political landscape.

Things were better back then. But the genie is out of the bottle. I'm afraid it can't be put back in...

And yet I don't see how this is true. First of as mentioned before, when did the decline start. Then there was a very different picture of what blacks, women and gays were allowed to do. Their social rights were much lower than their rights before the law.

There have been massive increases and a development for the better here. But as always the good comes with the bad and the bad might break our bad this time.
When women started to perceive themselves as alpha males they taught their children to be beta. And with I don't mean the bs classification and hubris you always see in most manosphere posts but beta in the sense that dependency and helplessness has increased, as much as unwarranted (e. G. You can't back it up) arrogance.

So there is some good you missed captain.

At best, Carl Scott makes the point that the 40s and 50s were a stage in the ongoing decline, when the most obvious tendrils took root.

I'd agree with him; things have been going steeply downhill since 1750.

Get a suit, and get reasons to wear it. Does you good.

Today's generation is more like the generation of the roaring 20s, only worse. That was the original garbage generation, complete with greed, nihilism, and immorality. They caused the great depression, which forged the greatest generation.

If history is anything to go by, the next generation may also be pretty good.

Also, my grandfather is 83 and from that generation. He was just too young to go to WWII and ended up being allowed to drive earlier than most young men because they needed someone to drive the school bus. The ladies loved my motorcycle riding, original Harely-owning, boxing, bee-keeping, general store-operating grandfather. I admire him greatly.

And this man tells me that if he was a young man today he would not have children. This world isn't fit for bringing children into.

@Reluctant, Have you heard of masculine style? Its a great blog. Tanner really knows his threads and has a consulting buisness.