Yes, Jimmy, the Democrats Are Socialists

Of the limitless examples of American ignorance, claiming that the democrat party is nothing more than a socialist one and the scoffery that ensues is one that particularly angers me.  The average American (at least in my day and before) was brought up to see "socialism" and "communism" as pejoratives.  And for good reason.  Socialist economies grow slower.  Socialist economies produce less and have more poverty.  And if they go too far down the left side of the political spectrum into full blown communism, they have a tendency to kill hundreds of millions of their own people.  So when you make any accusation of a politician or person being a socialist you are immediately dismissed as crazy or a right wing lunatic because you're essentially claiming that person is a fool-near-murderer.

However, practically nobody in America bothers to take the time to understand, economically, what a socialist is.  And so when the democrat party champions nationalized health care, wealth redistribution, unions and worker parties, bailing out companies, and investing in solar ones, the average American ignoramus does see "socialism" they see a party that "cares" and is "for the little guy."

I try to make things simple as possible, so simple the empirical data is right there telling you you're wrong about the democrats and the US not being socialist.  But even this simplicity, fact, and empirical data is not enough to overcome the stupidity and ignorance of most Americans (and thus why I no longer care and enjoy the decline).  But for posterity's sake I'm going to throw this old beaten up chart up one more time.  It shows government spending as a percent of GDP. 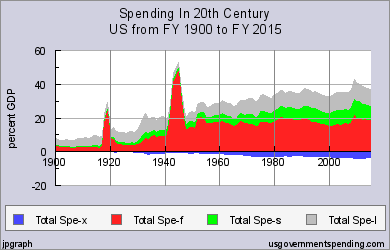 A country where government spending accounts for 40% of GDP is NOT a capitalist one.  It is a socialist one.  And if the republicans had any balls they would start calling the democrats the "socialist" party because that is what they are.
Posted by Captain Capitalism at 7:48 AM

The democrats are socialists and the republicans are cowards.

If Obama isn't a commie, then why am I selling Commie Obama hats?

More people are coming around, Cappy Cap. Just wait for that "free" healthcare to kick in for everyone to understand.

Not so much socialist, but fascist in Mussolini's definition of "everything within the State, nothing outside the State". Admittedly without that nasty fuhrerprinzip, although that's what made all that Obama adulation so creepy.

The problem is that the Republicans are playing this game, too. That's why the GOP Establishment hates the Tea Party.

No - the Democrats are Communists while the Republicans are mostly Nazi's. Both are different flavors of socialism and neither really pay much attention to capitalism or the Constitution anymore.

I'd say most politicians working today are social democrats. Podsnap has a point. The parties just like to massively spend on different stuff, but they have more in common with each other than I would like to believe.

Some people have even called Hayek a social democrat. See for yourself here.

get back to me when the republicans repudiate one program from fdr or lbj. they won't because they accept the entire edifice. they even add to it with a hughely bloated progressive military and medicare part d.

--
be indifferent. enjoy the deline.

The Old Man in the Cave said...

Don't forget that socialist states also mistreat their environments much worse than the capitalist ones do, contrary to popular opinion.

I recently watched a program on the Greek crisis. Asked about rampant tax evasion, some rich guy said, "That doesn't happen anymore. If you underpay your taxes by a single euro, you go to prison."

So, I thought, this is how free-healthcare socialism segues into death-camp socialism.

No, Borepatch, the repubs are NOT playing Obuttholes game. No, they are not Nazis. I like you and your blog and find it great reading - but this shite drives me nuts.

Your repubs and our conservatives in Canada CAN'T go back to our former ideals. If we do we are out of the the game. North America has shifted left; and realpolitik demands that we either realize that and deal with it - or go home.

Nor do we hate the tea party; hell - we agree on 95% of the issues. The fact is that we are divided over some relatively small but polarizing issues - and the Donks and Liberals can eat us alive when we split like that.

The fact is our two parties can negotiate and compromise with each other - or we can each try to do it with the Donks. We can see how that is working out too.

Unless we sober up, you can look forward to Hillary in 2016 too. There is no rest for wicked and no respite for the stupid.

Both parties are Progressives. We need a new party that is based on the foundation set by our founders. Unless that happens this country is screwed, because the incumbents won't leave voluntarily.