Housing Not Peaky Yet

With the recovery of housing prices, but an obvious lack of economic growth (not to mention genuine hope from the non-parasitic classes), many people are concerned about another housing bubble.  Of course increasing housing prices has allowed people to finally refinance....

which has eased personal finances somewhat, but once again is there that specter of a housing bubble.

Well, you're lazy, but loveable economist who decided to stay up all night playing video games decided to check before he went to bed this morning and no, it does not look like there's a bubble....yet.

Using a simpler measure of housing prices to economic production we see what we surmised (increasing prices, but no economic growth), but it is nowhere near as peaky as the idiot-fueled bubble of 2006. 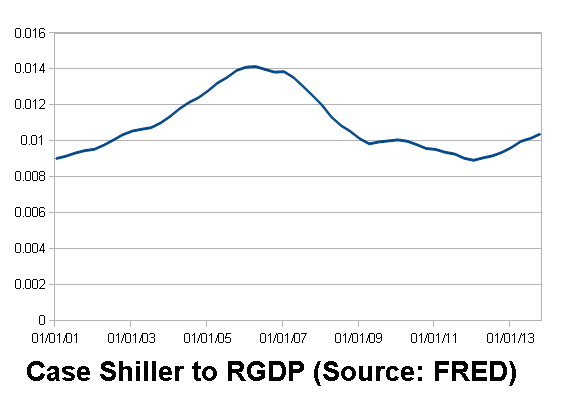 Naturally to be professional about it one would look up the price to rents ratio, but I'm lazy and decided to do this temporary hack job instead.  Besides, if you want to worry about something, worry about the education bubble.
Posted by Captain Capitalism at 6:50 AM

Housing bubble I figured out what to do with and struck (with my meager resources) at exactly the right time. Sort of a new thing for me to do both at once. Wouldn't mind doing that again. What I can't figure out is how to profit from the education bubble, which I see daily in serious close-up. It's there, and the pin is very close to giving it a nice jab, but how to benefit instead of just dodge I haven't a clue.

I work for some people with a lot of rental houses that they started buying for cash in late 2010. They ended up buying about 150 or so, and would have really liked to buy more, but they were unable to obtain any after around May of 2013.

The houses they were buying were never even listed for sale because there is this huge underground housing market for cash buyers where the listing agent will ask the seller their bottom cash/quick sale dollar, have the cash buyer look at it, and then do a quick cash sale.

It was a bonus for everyone involved because the seller didn't have to bother with inspections, the agent didn't have to mess with listing it, taking and posting pictures, and showing the house numerous times, and the buyer got a house for bottom dollar.

The market dried up, I was told, because in mid 2013 huge corporations started buying up all the inexpensive houses. I'm assuming they offered the agent a larger commission than the individual cash buyers.

Now, all that is available here are extremely distressed houses with major structural issues or overpriced houses with their prices artificially inflated by the lack of houses on the market.

The weird thing about all of this is that you can drive through neighborhoods half of the houses are empty, and other neighborhoods where half the houses have for sale signs in the yard. I haven't figured that part of it out yet except that maybe the huge corporations are just holding onto the houses waiting for the prices to rise or something.

The problem with housing and education is that both of those things are the targets of leftist, command and control-types fawning over them as ways to create, develop, and imporve their own brand of "equality."

A place to live and an education? All you need now is a chicken in every pot, and you've got your topis, amirite?

The problem is that when your only tool is a hammer, every problem looks like a nail, and so when these leftist command-and-control types see some people not owning their own home, or some people not going to college because it is too expensive, they decide to smack that nail with the only tool they've got - the hammer of centralized, command and control government.

Situations where demand for these things goes through the roof, what with all the "free" money flowing about, and with the bubbles comes the insane cost increases.

Secondary education is becoming more costly at many times the rate of inflation SPECIFICALLY BECAUSE of the unintended consequences caused by these command-and-control types trying to force a solution on a problem that the market would not bear. All you folks being priced out of secondary education? Blame your leftist government, not the free market.
I always laugh whenever I hear someone point fingers at the free market for having caused the housing bubble and crash, ad now the education bubble.

And I laugh because it is the exact opposite of what they think is happening. They think "I got screwed by greedy free-marketeers because PROFIT is IMMORAL!" when what really happened is that they got screwed by socialism - the very socialism that they are probably "RAH-RAH Shishkoombahing" on a daily basis.

Back in 2006 or so I sat in on a personal finance course being taught by a professor I knew. He wanted anyone and everyone to show up regardless of if they were paying for the class or not because personal finance mattered more than just about anything else anyone would ever take in college.

At one point in the course he explained the housing bubble and told us it was going to crash in a few years. Like most of his predictions, it happened or was right about to happen.

What his class taught me above all else is that he knew his shit and the people who said he was wrong or would be wrong have always proven to be incompetent nay-saying idiots who can't see trouble barreling down in front of them.

What I learned in his class were things which have made me respect the hell out of you Clarey. You know your shit and can see trouble ahead of time.