Why Trevor Phillips Is Another Nail in Hollywood's Coffin

Just finished GTAV and it is certainly one of the best games I've played in a long time.  Many good things going for it, but hands down the best thing it had going for it was its character development in a player called "Trevor Phillips." 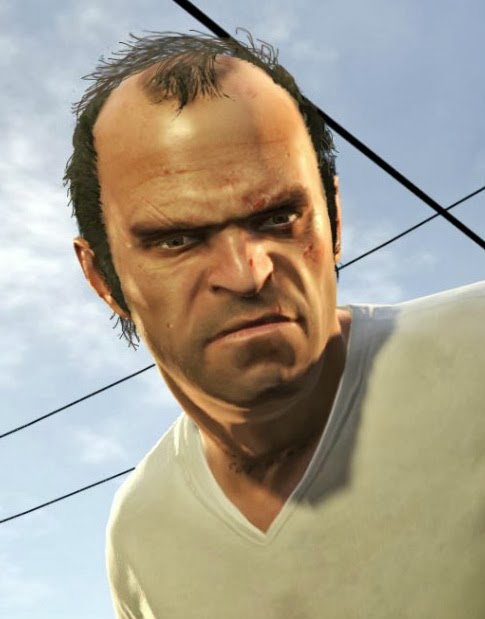 If you don't want to play the video game and just get an idea of what makes Trevor Phillips such a crown jewel of the game, just watch some of the youtube clips of cutscenes starring Trevor. (cursing and violence warning BUT I would like you to watch it so you realize my cursing is quite tame).  You may find it a bit crass, but you will no doubt have to admit that the character development is amazing and Trevor is quite colorful.

So why does a video game character, no matter how well-done, pose a threat to Hollywood?

See, even with the extra $20 I had to spend on an external thumb drive to play the $50 game, I got no less than 35 hours of game play out of the game.  That's $2 per hour of entertainment and I'm not even 65% done with all the missions.  Whereas two nights ago I forked over $17 to see a craptacular movie called "3 Days to Kill" (movie review found here).  Not only was it bad, it was only 2 hours, so $8.5 per hour.  So not only was the video game more entertaining (not to mention interactive) than the movie, it was a fraction of the cost.

But where the likes of Trevor Phillips REALLY poses a threat to Hollywood can be found in the credits after you conquer GTAV.

Well, think of it this way.  The programming, the development, the art, the coding, the voice acting, the scripts, everything that went into creating a massive, engaging environment, not to mention a near 35 hour movie, obviously take more time, people, and money than a 2 hour film.  But in doing so they produce a product that lasts multifold times longer making it not just a cheaper per hour form of entertainment but a superior form of entertainment.  I pay my $2 per hour and I can get about 17 movies out of this game.  And when it involves incredibly well developed and endearing characters like Trevor Phillips, the question then becomes, "George Clooney who?"

In short, I've spent more hours sitting in front of JUST ONE video game this past two weeks than I have movies the past 3 years and it's acting is an IMPROVEMENT over films.  Soon as technology gets so advanced you can't tell a digital version of a person versus the real thing, real live actors won't be able to compete with the perfection and costs of computers.  Alas, George Clooney and Hugh Jackman shouldn't be so concerned about me pursuing an acting career as much as they should advances in computer processing speeds.
Posted by Captain Capitalism at 3:00 AM

Ever see a movie from 1980 called "Looker"? It's about a computer company that hires models, gets them to change their faces via plastic surgery (So they're aesthetically "perfect") then scans their bodies into a supercomputer which beams their image into studios and TV sets to be filmed. Then the models themselves are murdered by the computer company (so the company can continue to use their images as virtual actresses without paying them.) I can see something similar happening in the future (not the murdering or the beaming images into virtual sets part, but the actors and actresses being paid to have themselves scanned so companies can use the virtual versions of them in productions.)

One only wonders how far it can go. How is the cult of celebrity going to cope if most of its celebrities are virtual people with no lives outside of the screen? Who's going to win best actor if the actor's "acting" was animated by a technician and voiced by a voice actor? It's possible virtual performers might be given an AI and some kind of a life in a virtual world outside of the movies they're in so their "fans" can interact with them. We might even see virtual prostitutes modeled on the virtual actors and actresses (so that their fans can actually "own" a version of them.) Creepy.

Agreed. Gaming is a far more cost-effective way for a man to entertain himself than going to the movies. Every year or two I replay the Thief series and the entire Half Life saga including HL2 and the episodes, and that's not to mention newer gems such as Bioshock Infinite, of which Aurini has spoken very highly.

And as you so eloquently put it a few weeks ago, when I want to relax and enjoy myself, characters such as Garrett, Gordon Freeman, and Elizabeth will always say "Yes!"

It took me a while to complete, but this was the first Grand Theft Auto game that I actually completed within a few weeks. I was disappointed when I was done, as the experience was over. This game was head and shoulders better than any game I have played and hell, at 48 years old I started with Pong. As long as products like this are churned out, Hollywood will lose fans, at least the ones that are not content to sit slack jawed and stare at the screen while liberal fantasies are shoveled into their dome.

Jack Nicholson doing the voice of Trevor would have elevated the acting to a whole other level. That could be distracting though, like Adam Sandler voicing Dracula.

I'm not much into gaming so I decided to check out that video to get an idea what the craze is all about, and I am shaken. That was some seriously disturbing sh*t. Mainly because that is what the youth of tomorrow are learning. We are so f*cked as a society.

It occurs to me that I will be a feeble old man when those little turds start running or ruining the place. I need to go get some guns. Lots of them.

Looker was excellent. Even more relevant is Videodrome, made a few years after that...these guys basically predicted the internet and the associated interactive violence....30 years before it happened.

Hey capt you should let everyone see this video which proves how much bullshit feminism is.

The digital characters in Final Fantasy, the Spirits Within, were so realistic, they had to dumb down the animation for the MBA morons who represented the backers, who were convinced the production company had cheaped out and used live actors.

Buying year old games on Steam for 75% off the original price really bumps up the $/hr entertainment value.

One only wonders how far it can go.

The "handed" as described in "Quenn of Angels" which takes place in LA in 2047. Old "actors" such as Liz Taylor will make their return to the screens.

"It occurs to me that I will be a feeble old man when those little turds start running or ruining the place."

Don't worry, while those little turds learn to become Trevor Philips, I am learning chemistry and nuclear physics.

Those fucks want war ? They're going to have it big time !