When you are younger or first starting to get into politics, you will logically, but simplistically assume that corporations are generally for free markets and capitalism.  They want to maximize profits, so they are for efficiency, excellence, growth, and low taxes.  But as you age you start to see corporations for what they really are - shills that will take any advantage they can to increase profits for all those who participate in it.  This obviously manifests itself in the form of lobbying where corporations throw off the moral mantle and have no problems essentially costing the American public their freedoms over the long run, if it can profit corporations in the short run.

But there are other ways corporations become the moldable, amoral entities that they are and that is when they lose their spines and just do whatever the government tells them.

For example HR and diversity.

40 years ago corporations could have said, "No, we're not doing this diversity thing.  We're hiring the best people, period.  And no, we're not creating a whole new department out of cloth to employ women.  We don't need 25 year old ditzes screening applicants.  We need the bosses and managers screening their own labor."  But they didn't.  They swallowed it whole because they thought the marketing and PR benefits of seeming like a "kind and caring" corporation would outweigh the costs.  Now you have day care centers, flex-schedules, etc., that frankly disproportionately benefit women while foisting additional work and costs on men and childless women in the work place.

Combine this along with the 20 year battle I've had with HR ditzes, and my loyalty to corporations as a political ally has all but vanished.  But if there was any glimmer of hope that maybe corporations would have an ounce of sanity, that maybe there are people getting into the upper echelons of corporate management that realize the threat socialism is posing to the west, it was snuffed out with this: 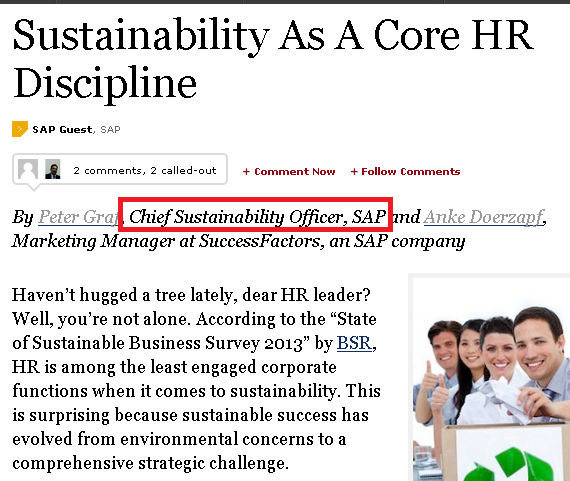 I couldn't believe it when I heard Joe Soucheray mention it, but yes, fellow economists, lieutenants, agents in the field, corporate America has decayed so much and lost all sense of sanity that it now regularly employs...

Naturally, it would fall under the domain of HR as no accounting, engineering, or "real" division within a company would tolerate such tripe.  But what is important to learn from this is that corporations are no longer viable long-term solutions to your employment.  They aren't sane entities where common sense and logic rule, and a hard working sane individual will succeed.  They are increasingly becoming politicized entities that if you work there it would be like working in a psych ward.  Worse, it requires that you must play politics, tow the company's "sustainability" line, donate to the United Way, and engage in "Bene Gesserit"-style manipulation to advance.

What this means for you, especially younger people, is that your efforts to find long-term, sane employment are probably better spent looking at smaller companies, self-employment, or companies with a strong, conservative history.  You don't want some company that is so large it has HR ditzes screening at the front door, and you CERTAINLY don't want a company that is foolish enough to waste its money on things like a CSR or "sustainability" department.  Of course, you could be a soulless sociopath, in which case you'd excel in such an environment!  Hell, in 20 years time maybe you could head up the newly formed "Gaia" department.  But for the rest of us, it seems the route to a successful career via the traditional large corporation has been closed.
Posted by Captain Capitalism at 8:38 AM

The first kind are the most eager to apply to these types of positions. And they do little but produce some PR, and cost the company money.

On the other hand, a CSO that recognizes that "sustainability" is more about saving money, than about saving trees, can save the company cash. Sometimes lots of it, sometimes just a 1/2 percent on yearly operation budget.

A good CSO will convince the clients and the management that their proposals are to save the planet, but are really there to save cold hard operating capital.

Simple things like installing a "green roof" can cut cooling costs by 5-20%. Cutting back on cleaning products, which are normally overused ridiculously, can cut costs, and the greenies will support it, and pay extra for the benefit of shopping/working in a chemical reduced environment.

A sustainability officer can (if they are interested in doing so) save the company a pretty measurable amount of cash every year.

Aaron, you forgot to do one thing with this post: you need to tie it back into your recent YouTube post about the importance of lifting weights and starting your own small business. I particularly like the "F You Money" concept. That kernal of truth, coupled with the earth shattering concept of "spending less than you make" is powerful. People spend way to much, buy stuff (cars, houses, boats, cabins, stuff) and become slaves to the lenders (banks and credit card companies).

Being a slave to the lender makes you a slave to the worthless corporation, and trust me, the Crash of 2009 has unleashed management to behave even worse. In the Board Room, you hear things like this:

1. The workers need to work more hours so we can get a bigger profit margin. They are salaried based on a 40 hour work week, yet we can get them up to 50-55 hours and bill out all the time to the customer. Profit has been made by keeping labor cost constant.

2. The worker should be happy they have a fucking job. There are people lined up on the street, and I can replace you at any time.

3. If you don't want to work 50-55 hours, you are a DIVA and need to cut the entitlement mentality.

4. You need to work those 50-55 hours because you MIGHT get a bonus at the end of the year, depending on the performance of the company (usually horrible), the division (usually sucking), the group (usually treading water) and you (who need to work more hours).

5. Your raise is tied to the performance of your peers. You have been kicking ass? Great! Thanks! Here is a 2.5% raise because Sally sucks and is getting a 2% raise. After all, you have the same degree, the same certifications and came on board at the same time. We would not want to have that much disparity between peers. Keep up the good work!


Yeah, I have seen and lived through all of this. It was fabulous, so much so, that I decided to let all you people pay for my ass. I am not going back to that either.

If you are the aggressive type, don't shy from the companies that have heavy HR departments and lean liberal. It will strengthen you to get in there and fight the liberal policies. You will get good at it or you will get fired. Sink or swim. Anything else is surrender. Plus it is fun. Good luck.

There are a few islands of sanity still out there, Cap. Some time ago, I interviewed at a fairly sizeable company that performed highly technical work. The man who interviewed me (Technical Recruiter) spoke to me on the phone for five minutes, interviewed me on site for five minutes, introduced me to the shop supervisor (who looked at my resume for about 20 seconds, then asked me when I wanted to start), then filled out my pre-employment paperwork. The "HR Department" (a nice older lady) was responsible for filling out my tax forms and arranging for direct deposit of my paycheck.

AND THAT WAS IT. No "where do you see yourself in five years" grilling from a young ditz trying to act as a filter.

common captain and friends, lets take a look into the future tonight:

This is another great topic that too many are obtuse about. We only have EPA, FDA and scores of other agencies because the corporations love the rent seeking they can do at everyone else's expense.

Except the libtards never get it that part of the issue. They really think these agencies work for them.

I work at a giant multi-national utility and all is proceeding as you have foreseen. The only consistent employees are those 45 and older, who have the (pleasant) anchor of a generous pension. The crop of people my age, 25-35, are rotating in and out just as soon as we finish plundering the company for education benefits and training. We do have a Sustainability Officer, and all our hires are pre-screened by HR. You get referral bonuses for HR, analysts, and lawyers, but nothing for engineers, designers, or project management. They have forgotten that we need to sell electricity and gas to make money.

Usually such "savings" aren't when you consider capital costs and taxes. Sure you save a bit on operating costs by installing a solar or a "green" roof, but the ROI is so low you'd be stupid if you did that. That's why only government, or companies so large they have more cash than brains, do it.

In a 100k+ organization, having a few people who don't necessarily do useful work isn't all that big of a deal and probably unavoidable. As CBMTTek implies, sustainability officers who don't save money will not have their projects approved. My employer saved a lot of packaging money.

The idiom is 'toe the company line', not "tow...". Walk the white line, don't lose your balance and all that, dontcha know my good man?

I think some people tend to romanticize corporations, especially on the right. I still remember all that "job creator" rhetoric, coming from the guys who make it easy for the large corporations that are decidedly anti free-market.

Be damn glad you don't work for me.