Why You Want to be Alton Brown

"The nerdy guy with the bow tie and does the cooking show thing?"

"Why on Earth would I want to become that guy?" 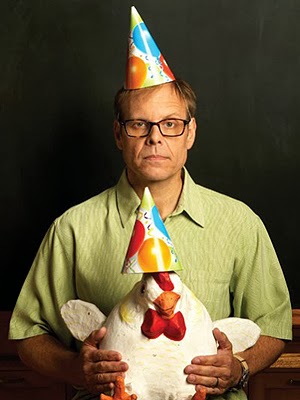 Well hold on there young lieutenants looking for role models to live up to.  Hold on and hear the ole Captain out.

Like me, you probably know Alton Brown as "that guy" who shows up occasionally on cooking shows as you control-surf from the Cartoon Network to Adult Swim to the Military Channel, occasionally transversing the Food Network.  You don't stop to watch him because...well...why would you?  It's a cooking network.  And unless you're Danny from 504, you have no interest in cooking.

But do you know of his background?

For while you and I see a kind of nerdy man approaching his 50's, the man is about the closest approximation to "The World's Most Interesting Man" we have.  I didn't believe it at first, when my girlfriend starting citing all of his accomplishments and hobbies, but after further investigation the guy is an accomplished man and a total badass.

First, do you have a 20 year career in radio and television to the point you never have to worry about working a real job again?  I didn't think so.

Second, are you a pilot?  Neither am I.  Alton Brown is and he OWNS two planes.  I own a 2003 Chevy and pilot it occasionally to the grocery store.

Third, but surely I beat Mr. Brown in the motorcycle department.  Right?  I mean, this guy can't do it all.  Right???

Guy lost 50 pounds as he went on AND SUCCEEDED IN losing that weight. He is dedicated to his health...and oh yeah, like young up and comers, he has a podcast.

Fifth, his personality has got to suck.  It just has too.

Watch any one of his "Good Eats" shows and he is a study in wit, humor and charm that most men should master.

Sixth, come on Cappy.  Give us something that we do better than Alton Brown!  Well, I don't think he's an accomplished ballroom dancer...oh!  BUT WAIT!  HE'S AN ACCOMPLISHED GUITAR PLAYER AND PLAYS IN A BAND!!!!

Sorry lieutenants, agents in the field, economists, and children, that nerdy exterior Brown portrays is nothing but a ruse. The dude is living life like a real man should - he's kicking ass, he's taking names, he's doing what he wants, and isn't letting one second of his life go to waste.

PS - from a reader 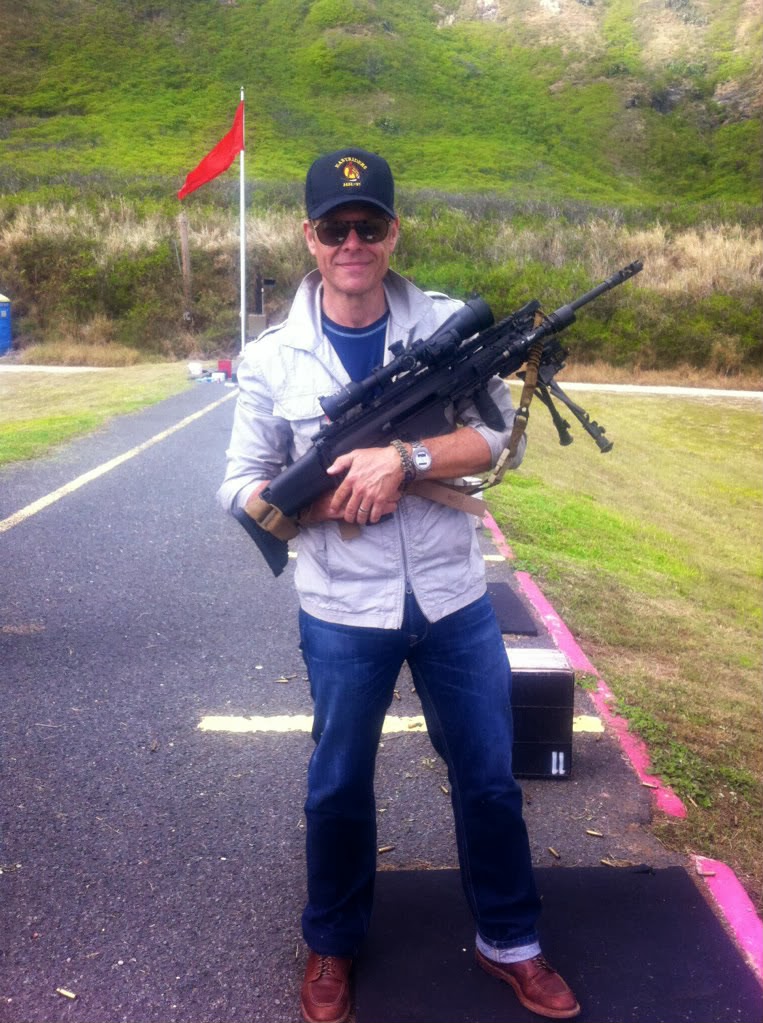 DAMNIT!!!!
Posted by Captain Capitalism at 9:58 AM

good eats is one of my favorite shows on food network.

and yes, he's a total geek.

thanks for the linkage Aaron.

It's true. I first cottoned on to the awesomeness of Alton when I saw one of his Good Eats shows, on the topic of oatmeal. He actually made oatmeal fascinating, and he did it for half an hour. After that, I paid closer attention.

Alton Brown is right up there with Mike Rowe, in my estimation. Or nearly. The cluster of actual role models is so close to each other, and so far from the rest of the herd, that comparison is pointless.

And he's a wiz with Post-it notes

Cap'n, you should heed Alton's example and learn to freaking cook. It's easy, it's cheap, and it sets you apart from other men.

If you can strip a rifle or fix a motorcycle, you can follow a damn recipe!

How to cook everything, the Basics by Mark Bittman is a good place to start.

You are forgetting a huge one: WOMEN ADORE HIM. I am one of those women!!!!!

i think every one of us can be alton if we decide what we want to do and keep pursuing those things.
for instance, in the past 5 yrs, i wrote 2 books, have 10 hours as a prop pilot trainee, skied at least 20 mountains and have been to both portlands.
last wknd i was in dallas and this wknd i'll be in ft worth(i live in houston). there's no guarrantees i can live as well as alton, but they wont be putting "he watched a lot of TV" on my tombstone either.
So, FIGURE OUT THINGS YOU WANT TO DO and are able to do and DO IT !

What Tina said. Years ago, a younger female co-worker asked me who did I think was "cute" on TV. I couldn't think of anyone because I didn't watch much TV. After repeated prodding, I finally said, "Look, unless they're digging something up or cooking, I don't even know who they are... and Alton Brown is married."

I've actually met him, at a book signing in my hometown a few years ago. He is just as witty and charming in person as he is onscreen; the line in the bookstore basically wrapped around the entire top floor with room to spare, and for every person in that line, he shook hands and said "Hi, I'm Alton," as though they were the only two people in the room.

In my experience, nerdiness is not so much having have those negative traits than predisposition to certain interests and especially the way the person is interested. It by this is why some reject certain people because it takes more than just glasses and liking a video game.

These interest tend to mean many nerds are actually quite interesting. Unfortunately many either downplays with shame or overplays. But it seems Brown got it down. It's only a ruse if nerd have to mean boringness and social ineptitude. But in practice, it doesn't.

Pilot? Ultralight, actually - if ya can't hear the wind in the wires you ain't doing it right!

Motocycles? Meh, I have a big cruiser and a kick ass ATV too.

Point is Cap...when you are an old fart Admiral like me you WILL have all those toys too. Us old guys didn't get all that stuff overnight, it takes time. You will catch your break, boys, just keep at it, be persistent, and never give up!

Alton Brown kicks all kinds of ass. I remember reading an article about him. He was working as a producer, and somebody had Julia Child on. He watched her show, said "I can do a better cooking show than that", went to culinary school, and did.

He's a cool mutha fucka for sure. I've met him several times, he used to live in Alpharetta, GA where I live now. He shot Good Eats in his house and I'd see him at grocery stores around town. Very approachable guy. We both love mechanical watches and would compare that day's wrist queen. Didn't know he flew, makes sense though.

For a split-second I thought you meant Alden Brown (aka Peter North), which would kinda make sense, but this guy is much more interesting.

I love Alton Brown. I have been a huge fan for years. He's like an encyclopedia of food knowledge. He's been a co-host on Iron Chef for ages and knows more about cooking than the chefs they have on the show. Definitely a modern day renaissance man.

But this here is the world's most interesting man.

You must have missed this bit, about the ultimate example of his pathetic geekery:

He sucked as a cook, so he studied chemistry to understand the science behind how cooking works...

And now he's famous as a guy on cooking shows.

Of course, I haven't sourced that, but I BELIEVE man... gotta be true

And he also was director of photography for music videos back in the day - he did REM's "The One I Love".

Alton Brown explains food at its core. He dissects his ingredients to the molecular level. The most interesting cooking show in the world, even though most of it is useless to me now that I don't eat anything with wheat.

My candidate for The Most Interesting Man in the World: Alton Brown

My candidate for The Most Interesting Man in the World: Alton Brown!

JS Mill, you are correct in a way. I am an Alton Brown mega-fan, if you will. He taught me to love cooking after I've hated it all my life. I've met him 4 times. (and you might want to add "comedian" to the list, Captain!) Anyway, he went to college for film production thinking he was going to direct movies, WAS THE DP FOR REM'S THE ONE I LOVE (btw), and although he sucked at Chemistry he wanted to make a better cooking show than what was currently on TV and he (like me) needs to know the "why" and "how". This is why Good Eats is so eye-catching. He was a film maker first before he was ever a cook. I think he said there were some... 76 (don't quote me) homage shots in Good Eats for his favorite movie of all time: Jaws. I have the biggest crush on him ever. Oh, and oddly enough, my most recent blog post is Good Eats related. :D http://katjaneway.blogspot.com/2014/01/my-first-gif.html